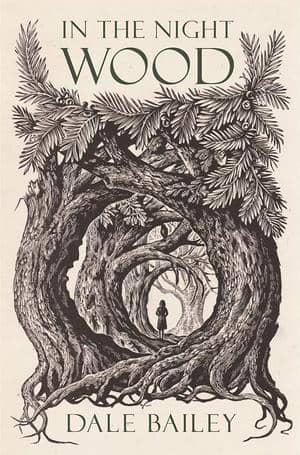 I’ve been writing about short fiction at Black Gate for over a decade, and over those years the name Dale Bailey keeps popping up.

He’s had a successful series of tales inspired by 50s monster movies (“I Married a Monster from Outer Space,” “Teenagers from Outer Space,” “I Was a Teenage Werewolf,” and “Invasion of the Saucer-Men”) in Asimov’s, Nightmare and Clarkesworld, and his fiction has appeared in many Year’s Best volumes. His novels include The Fallen (2002), House of Bones (2003), and The Subterranean Season (2015).

His latest is In the Night Woods, forthcoming from John Joseph Adams Books. The Kirkus review is pretty tantalizing:

Bailey’s novel has every aspect of gothic horror: the drafty manor, the shady servants, the tortured protagonists. The writing is dense with allusions and details, the narrative twisting and turning in the same way the Night Wood distorts the senses of anyone who wanders into it. The writing does get a bit convoluted and hard to follow at times, but it’s in keeping with the atmosphere of subtle dread that permeates the novel. The book is surprisingly short, and there’s a lot of buildup to a very quick climax… The succession of reveals in the frantic last 30 or so pages, however, is tense and disturbing, satisfying for any horror fan.

We previously covered Bailey’s 2015 collection The End of the End of Everything.

In the Night Woods arrives from John Joseph Adams/Houghton Mifflin Harcourt on October 9, 2018. It’s 224 pages, priced at $23 in hardcover, and $12.99 for the digital edition. The cover is by Andrew Davidson. Read more here.

In this contemporary fantasy, the grieving biographer of a Victorian fantasist finds himself slipping inexorably into the supernatural world that consumed his subject.

Failed father, failed husband, and failed scholar, Charles Hayden hopes to put his life back together with a new project: a biography of Caedmon Hollow, the long-dead author of a legendary Victorian children’s book, In the Night Wood, and forebear of his wife, Erin. Deep in mourning from the loss of their young daughter, they pack up their American lives, Erin gives up her legal practice, and the couple settles in Hollow’s remote Yorkshire mansion.

In the neighboring village, Charles meets a woman he might have loved, a child who could have been his own daughter, and the ghost of a self he hoped to bury. Erin, paralyzed by her grief, immerses herself in pills and painting images of a horned terror in the woods.

In the primeval forest surrounding Caedmon Hollow’s ancestral home, an ancient power is stirring, a long-forgotten king who haunts the Haydens’ dreams. And every morning the fringe of darkling trees presses closer.

Soon enough, Charles and Erin will venture into the night wood.

Soon enough, they’ll learn that the darkness under the trees is but a shadow of the darkness that waits inside us all.