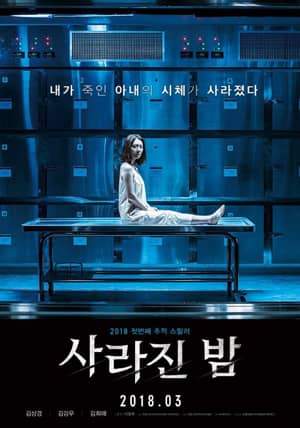 The second film I saw on the last day of Fantasia was a Korean remake of a Spanish original. The Vanished (사라진 밤) was written and directed by Chang-hee Lee, and is based on the 2012 film The Body (El cuerpo), which was written by Oriol Paulo and Lara Sendim and directed by Paulo. Lee’s film begins with a mysterious attack on a morgue security guard who may have seen a supposedly-dead woman (Hie-ae Kim) very much alive. At any rate, the body’s missing now. The police investigate, led by Jung-sik Woo (Sang-kyung Kim), who calls the husband of the deceased Seol-hee, Jin-han Park (Kang-woo Kim), to the morgue and ends up holding him for questioning. Did Jin-han have a hand in Seol-hee’s apparently-natural death? Or is someone seeking vengeance on him? What about his mistress, Hye-jin (Ji-an Han)? Questions and strange incidents multiply, as the police struggle to solve the crime before dawn, when they must let Jin-han go.

This is a movie that challenges the audience to work out what’s happening. Theoretically, even describing what genre it is could be construed as a spoiler; there’s an experimental drug that enters the story, and opens the door to various different possibilities. I can say, though, that there’s a fair-play aspect to the film. It’s quite possible to figure out by at least the half-way mark roughly what’s happening. For better or worse, I can say this because I did figure out what was happening without particularly trying to. I don’t know that it’d be fair to say that the film’s obvious, though; I happened to pick up on a couple of visual clues, and I’m not sure whether that’s chance or whether that’s good directing by Lee. I suspect it’s not intended, as certain scenes played out as though they were still meant to be mysterious. At any rate, I can say that if a certain amount of tension necessarily goes out of the film when you know what’s going on, it continues to be a solid story.

Some of that is just because The Vanished is technically sound. The location where much of it takes place, the morgue that stores Seol-hee’s body, is shot remarkably well. It has a slick, high-tech feel, but also a definite horror sense. There’s something claustrophobic about the building, filled with small rooms and odd nooks. And echoing halls, and an emptiness that can’t be defined. Conversely, the film also uses flashbacks fairly extensively, so the audience doesn’t get bored of the location. The lighting’s moody at every turn, but is on the whole notably brighter in flashback — still cold, still atmospheric, but brighter than the shadow-filled morgue. Tension’s ramped up by the time element: a clock appears every so often on screen, reminding us how little time remains before Jin-han has to be released, and making us question whether we should be rooting for him or against him. 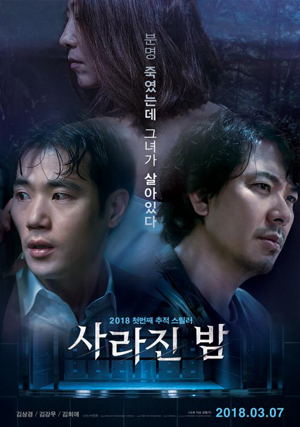 The movie’s also involving because it’s about something. About several things, potentially. Class issues are front-and-centre; Seol-hee is a very rich woman, the head of a company, who uses people as she wishes. Jin-han’s a professor, famous in part for being her husband, but also dependent on Seol-hee’s money. Jung-sik, the cop leading the investigation, is of course much poorer than either. Other themes suggest themselves; I’d imagine it’s possible to see a comment on gender roles, for example, given Seol-hee’s wealth and status. I’m not sure how that plays in with the film’s ending, but I can think of a few different ways to read it, which in this case is a profitable ambiguity. Overall, the movie’s title strikes me as important: The Vanished is about exactly that, the people who are vanished, are overlooked by society or are given less importance than the wealthy. At the same time, the title’s a reminder that we’re all going to vanish from the world sooner or later.

It’s possible, perhaps, that this is also a movie about what can be proven, versus what is right and true; what is just. “What’s a ‘legend?’ An unauthenticated story,” says a cynical cop early on. But who here is trying to prove what? And why? And is any of it provable in law? Jin-han’s a scientist, which means he’s supposedly concerned with what is rationally provable. What happens when he faces the possibility of something beyond the rational, in one sense or another? But then, from another angle, the movie’s a challenge to the audience: what can you prove, really, about what you’re seeing? What do you think’s happening, and why? What’s authenticated? When you see something in this movie, what are you really seeing? At the end, when the solution’s unveiled, of course the movie goes back over itself, showing what was a clue and what was not; we get all the answers, everything gets authenticated. Whether one has worked it out beforehand or not, everything fits together, jigsaw-like.

Perhaps accordingly, there’s a level where the characters are nearly stock types: the heartless businesswoman, the shabby cop, the kept husband, the flighty young mistress. But then not everyone is who they appear to be, and if the film makes use of familiar plot elements the ending is nevertheless played particularly well, with real heat. Perhaps the best performance across the film as a whole is from Kang-woo Kim, who takes a character who should be unsympathetic and makes him relatable. His increasing nervousness gives us a real sense of something at stake on an emotional level. There turns out to be even more afoot, but for much of the film his fear establishes the story’s importance.

The film’s an entertaining game of cat-and-mouse in which part of the sport is figuring out who’s playing with whom, and why. In a sense, of course, that the person being played with is the viewer; so the question then must be, is the game fun? I think The Vanished works. It adheres scrupulously to the rules, and has a good payoff at the end. It’s not overly challenging in form, but it’s an energetic walk-through of a very solid genre tale.