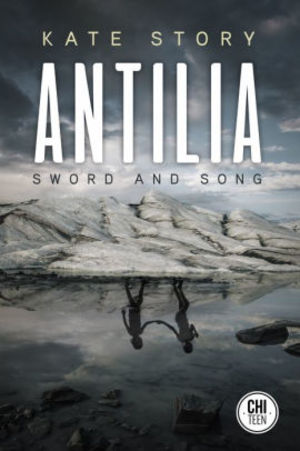 I firmly believe we need less grimdark and more hopepunk these days, but I still like novels that explore a darker near-future, since they remind us we aren’t out of the woods yet. That’s the specific focus of Antilia: Sword and Song by Kate Story, which straddles two worlds: a near-future North American Union governed by a populist, militant government, and a strange fantasy realm protagonists Ophelia and Rowan independently use as their escape from the “real world.”

The typical “boy meets girl” motif in Sword and Song takes interesting turns, not just as Ophelia and Rowan realize someone else knows about their made-up world. Their dysfunctional family dynamics are unique and compelling and explain why they both so desperately need an escape. The slow reveal about Antilia is effective, too, since for the first half our protagonists only jump there for brief stints, giving the bizarre island an air of mystery. Things aren’t good there, either, between an erupting volcano and a political fracture between the island’s two cities, but apparently Ophelia and Rowan are destined to fix things. That probably sounds familiar, but strangely the more we learn about Antilia, the more it all feels familiar: the architecture, inhabitants, cultural tentpoles, etc, feel like a cross between Wonderland and Narnia, almost like Antilia was created by accident based on someone’s favorite stories as a kid. There’s even a sword-in-the-stone, which Rowan remarks is bizarrely similar to Excalibur.

Unfortunately, Ophelia and Rowan ending up stuck in Antilia in the book’s second half lost my interest the further I got, specifically because the island didn’t feel very fresh. Their parents and friends in the “real world” jumped off the page, but the people and creatures of Antilia seemed more cookie-cutter. If there was a point to the hodgepodge of familiar elements, I missed it, or maybe didn’t appreciate it. The North American Union is way more compelling, and I kept wanting to go back.

Spoiler alert: we don’t, but I’m assuming Story will return to the NAU in the second part of this duology. In the meantime, fair warning that you’ll have to deal with a huge cliffhanger – the kind that I’m surprised an editor would let her get away with, and I hope doesn’t alienate too many readers. Because at the end of the day, Sword and Song does have a lot of interesting elements built into it. I’m keeping in mind that this is YA and aimed at a different audience than me, who would hopefully connect with the familiar, storytime vibe of Antilia. Rowan and Ophelia’s specific struggles definitely reflect a lot of what I see my students going through, and the takeaway message tied into that is probably this book’s greatest strength: the world’s a scary place for kids these days, but escaping somewhere else doesn’t necessarily make things better.

“hopepunk”? Why not just say positive?

R.K. Robinson: “Hopepunk” is an emerging subgenre in SFF that’s gaining more traction – a lot of people equate it with “solarpunk,” though they’re not exactly the same. The idea is that looking at the future optimistically (ex: the way Star Trek TOS did) is a lot less common today, and so authors are calling it “punk” because optimism almost feels rebellious or outside-the-norm. Sort of the way cyberpunk said, “Hey, look at *this* possible future” when most people didn’t realize how widespread computer technology could get. I’ll admit it’s a relatively new term that’s still gaining traction, but I like to use it wherever I can.