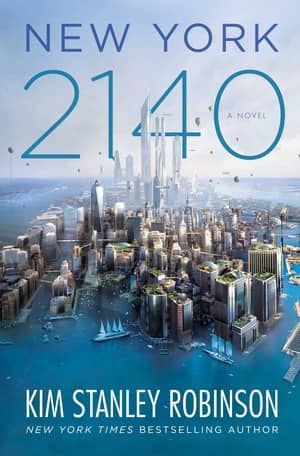 I haven’t read any of the 2018 Hugo nominees, and that gleaming metal statue is being given out this weekend at Worldcon in San Jose. I better get a move on.

There’s plenty of great titles on the nominee list — including Martha Wells’ All Systems Red, Sarah Gailey’s River of Teeth, and Yoon Ha Lee’s Raven Stratagem — but the one I’m most interested in at the moment is Kim Stanley Robinson’s tale of urban post-apocalypse, New York 2140. The Washington Post calls it “Massively enjoyable,” and the Guardian says it’s “A towering novel about a genuinely grave threat to civilization,” but mostly I want to read it because, come on. A submerged New York in 120 years? That sounds awesome.

New York 2140 was published in hardcover last year, and finally appeared in trade paperback in March. Here’s the description.

As the sea levels rose, every street became a canal. Every skyscraper an island. For the residents of one apartment building in Madison Square, however, New York in the year 2140 is far from a drowned city.

There is the market trader, who finds opportunities where others find trouble. There is the detective, whose work will never disappear — along with the lawyers, of course.

There is the internet star, beloved by millions for her airship adventures, and the building’s manager, quietly respected for his attention to detail. Then there are two boys who don’t live there, but have no other home — and who are more important to its future than anyone might imagine.

Lastly there are the coders, temporary residents on the roof, whose disappearance triggers a sequence of events that threatens the existence of all — and even the long-hidden foundations on which the city rests.

KSR is a top favorite with me. It’s been a long time since I thought a book of his anything but excellent, and this one is no exception. He’s a deep thinker and it shows in all of his work.

This is why I love O’Neill posts: He has these very professional, laudatory remarks, like:

“The Washington Post calls it “Massively enjoyable,” and the Guardian says it’s “A towering novel about a genuinely grave threat to civilization,”

“but mostly I want to read it because, come on. A submerged New York in 120 years? That sounds awesome.”

> “but mostly I want to read it because, come on. A submerged New York in 120 years? That sounds awesome.”

It was at the top of my ballot! A very enjoyable and interesting novels.