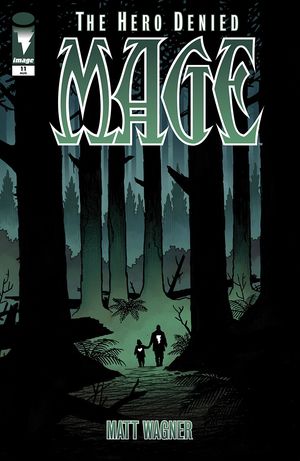 So a lot of The Hero Denied seems to concern the dual identities that parents need to maintain, but which far too many don’t. And yeah, like so much of the series that’s gone before, we’re going to start by talking about fairies and magic, but we’ll soon find that we’re talking about our actual lives. If I seemed down on this third part of the Mage series early on, it’s because Kevin Matchstick seemed to be setting up a false choice between fatherhood or adventure. He didn’t have a job, didn’t seem to do a hell of a lot with his kids beyond picking them up from school, and basically spent a lot of his time wandering around aimlessly. His wife would nag about his going off on adventures when he should be attending parent-teacher conferences. His kids were little more than vulnerable targets for monsters whom he would eventually resent.

But with the kidnapping of Magda and Hugo, the dual identities of father and hero have finally come together. Kevin’s finally seeing that he’s raised a couple of amazing kids. We even get a glimmer this issue of the wonderful, horrible truth that most parents eventually realize: his children will one day be able to look out for themselves and won’t need him any longer. And rather than treating his wife like a damsel in distress, Kevin is confident that Magda will be able to take care of herself and their son. Basically, Kevin’s gone from seeing his family as targets to seeing them as allies. Powerful allies. His roles of hero and father aren’t meant to be a choice, but rather complement one another.

So this issue opens with Magda sending her purple flying cat familiar, Cleo, off into the vertigo chamber that lies outside their penthouse prison. The familiar is charged with finding an exit. While that’s going on, Magda shows Hugo all of the magic items that she’s managed to cobble together. The scene is very reminiscent of Q showing off gadgets to 007. There are exploding light bulbs, a hairdryer gun, invisibility hats, and spider-walking sneakers. I’m sure it’s significant that Magda paints lightning bolts on the sneakers, signaling that Hugo is taking on an aspect of his father.

Meanwhile, Kevin and Miranda are heading off to a forest in search of an ally. Kevin won’t say who it is, but he does let his daughter know that this ally exists in an area of pure green magic, suggesting that we might see the return of someone from the original Hero Discovered volume. And while bringing back Edsel or Sean would be a fun bit of nostalgia, I don’t think that Matt Wagner is going to go there. I also don’t think that he’s going to look for the Mage there. I’m actually expecting a surprise for this ally, but I wouldn’t lay down money on anyone in particular just yet … chances are that it’s the issue 12 cliffhanger.

In any event, Kevin nearly runs over the Questing Beast and quickly realizes that the beast is trying to lead him to the green part of the Fairy Realm, rather than to the Fisher King. There’s a nice scene where Kevin uses a magic spitball to take down a fence, then a reassurance that Miranda is safe as long as she’s with him. And here we see a nice parallel between the Hugo/Magda scene and the Miranda/Kevin scene. In both cases, the parents obviously want to impress their children (Magda with all of the magic items she can assemble and Kevin with his magic spitballing). How many parents know the sting of knowing that their children think they’re kind of lame? How many parents would love to hear “Wahoo! Go Dad!” from their child? Well, maybe not in those exact words, since most children don’t even use the word “wahoo” ironically. But still …

That brings us to the interlude with the Umbra Sprite and her five Gracklethorn daughters. Unlike Kevin and Magda, the Umbra Sprite has never doubted the admiration that her children have for her. She sees no need for grand displays to impress them and even comes clean by admitting that the magic nightmare fountain that’s been providing her with power has run dry. In order to have a chance against Kevin Matchstick, they’ll need to replenish its dark waters. At this point, Aleksi promises her mother that they’ll do whatever is necessary to replenish the nightmare fountain.

Aleksi basically walked right into that one.

And we’re reminded that, although the Umbra Sprite has some maternal feelings for the Gracklethorns, she’s still a dark mother archetype character. She knocks Aleksi into the nightmare fountain and watches as her daughter melts inside it. There’s a beautiful scene where Aleksi begs her mother to let her embrace her one last time. The Umbra Sprite refuses, telling her daughter that she’s just looking for one last opportunity to strike against her. And as Aleksi finally melts into the pool, she admits that she was trying for one last fatal stab, then pledges her final allegiance to a far greater evil than her own as she dies. And the other four daughters watch this happen.

In Hero Discovered and Hero Defined, the Grackles were usually picked off one by one by Kevin and his team. Here, the first casualty goes to the Umbra Sprite herself. It’s rather telling that volumes one and two ended with the powers of darkness turning on one another, whereas the betrayals are beginning early in Hero Denied.

We move back to Kevin and Miranda heading deeper into the woods. When they finally find the Questing Beast, it’s resting beside a giant tree that’s positively bleeding green energy. But up in the branches of that tree is the imp that had accompanied the beast earlier. It’s the imp that Isis warned Kevin about, so he grabs a branch and charges it up with magical energy, ready to fight.

And I just realized, looking at the imp again, that it’s wearing the same blue poncho that Mirth was wearing in the first volume. So is this imp supposed to be the third incarnation of the Mage? The thing speaks in riddles, but then Wally Ut’s advice never seemed to make much sense either in Hero Defined. Isis warned Kevin about the imp, but we also saw in volume two that she didn’t trust the Mage. Of course, it would make sense that it’s near the Questing Beast. Kevin has been searching for the Mage and both times the Questing Beast appeared, it led him straight to this imp.

Going back to Magda and Hugo, they’re making their escape, unaware that the Umbra Sprite has managed to bring herself back to full power. After Hugo uses his magic shoes to walk up to the exit (up and down work strange in the building), his mother uses a completely different spell to follow him, flying up the shaft while holding onto a magic umbrella. And a part of me has to wonder, since Matt Wagner has based the look of these characters off himself, his family, and his friends, whether or not this whole thing was set up for that scene. More to the point, was drawing his wife as a modern-day Mary Poppins just something on Matt Wagner’s bucket list? It’s a great panel, but I’m wondering.

Once they’re near the exit door, Magda and Hugo are approached by giant serpents with dead human faces. These are apparently some of the things that are supposed to be worse than the Gracklethorns themselves. The issue ends with Magda admitting that she doesn’t know what these monsters are called. And I’m feeling just a bit smug because I’m pretty sure they’re called nagas.

So we’re closing in on the end of this mini-series, as well as the entire Mage saga. And it’s all rather emotional because I remember finding this series in my late teens, when I was making the switch from superheroes and giant robots to more mature fare like gloomy dream kings and talking aardvarks. I discovered Mage around the same time I was exploring my own writing. Back then, I’d seen so many coming-of-age/hero-discovers-his-potential stories that I didn’t think too much of them. Really, origin stories seemed boring back then because they felt like needless filler before getting to the good stuff. Decades into my own journey, those stories have re-kindled my interest, but now from a different point of view. I no longer relate to the Kevin Matchstick from Hero Discovered, that moody twenty-something who mistook nihilism for intellectual depth. Really, I’m not sure that I even relate to the Kevin Matchstick from Hero Defined any longer, the wanderer who let praise go to his head, assuming that he only needed to rely on himself to get through any trouble. I find myself relating more to Mirth or Wally, the Mage who tries to guide the hero, watching him fail again and again, yet confident that his potential will shine through.

I’m watching people half my age already achieving great things. My generation is no longer the young heroes who will fix the mistakes of our parents. At the moment, the best we can do is act as wise counsel, warning the next generation about the mistakes we made. And very soon, like Kevin and Magda, my generation will watch as the generation that follows us no longer even needs that guidance any longer. But that’s what you do. You offer advice and watch young heroes make their own mistakes. Or you force them down a path of your choosing, eventually sacrificing them to keep that path open rather than changing course.

When this series is over, somebody really needs to teach it as a college course.