In my last column I talked about the hugely exciting and popular Sinclair Oil robot dinosaur exhibit at the 1933 Chicago Century of Progress Exposition. As an aside I mentioned that the exhibit traveled to the Texas Centennial Exposition in 1936.

Few people remember that the Texas Exposition had another robot exhibit. This one was quite a contrast. What would qualify if you wanted to imagine the most boring robot exhibit ever devised? C’mon, you might say, a boring robot exhibit is an oxymoron. Not for the government. They rose to the challenge. The U.S. Department of Labor choose to build a talking robot to justify machines taking away jobs from people. In the middle of the Depression. Triumph! Let’s go, gang! The sarsaparilla’s on me!

Chicago’s huge success spawned a spate of regional fairs, the largest held in San Diego, Cleveland, and Dallas. Fair Park, just east of downtown Dallas, already was the site of the Texas State Fair and the recently completed Cotton Bowl. Even so, it was completely modernized in Art Deco style for the Centennial. 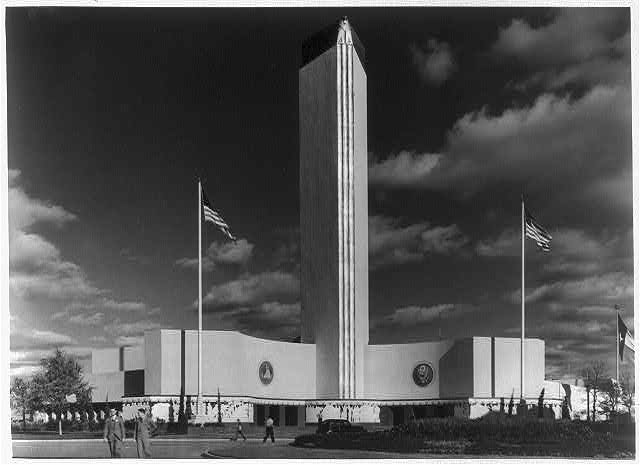 Fifty buildings, many of which remain standing today, were built for the Expo at a cost of $25 million, a huge sum, as much as the Empire State Building required. The Federal Building, with its soaring tower, is still used as administrative offices for the State Fair.

The mechanical man had been manufactured in Pittsburgh, crammed full of 500 gadgets that enabled him to talk and move through a four-minute speech. 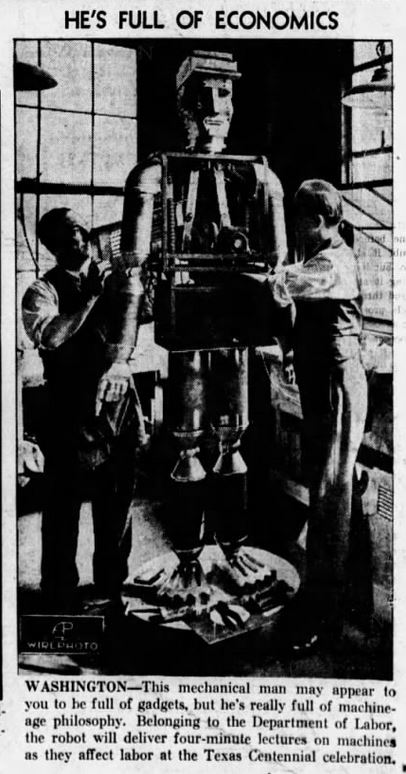 Newspaper articles gushingly reprinted factoids about the robot as given out by the Labor Department. You are witnessing the birth of the boring Powerpoint presentation.

The man’s eyes light up as he starts to speak. His lips move. …

After a gesture of greeting to his audience, he turns his head, points to the exhibit on the right and explains that revolving device which shows machines of great capacity.

To his left, he explains with another oratorical detail, is a second revolving machine – showing what the machine has done to take the drudgery out of office, factory, and home; to provide cheap and rapid communication; to spread knowledge; to provide more efficiency in business; even to safeguard the public from being killed by trains.

The synchronization is all done by a recording device, a cylinder like a thick pancake on which one little indentation starts the whole mechanism moving.

The mechanical man had his own stage over to one side of the exhibit floor, where you can see the lighted exhibit on each side he refers to in his speech, delivered every fifteen minutes all day long.

Verne A. Zimmer, from the division of labor standards, wrote the spiel, delivered in neutral tones carefully neither southern nor western in accent. Zimmer just as meticulously removed all arrogance out of the words, a public apologia to all those who felt they had been made technologically obsolete.

As you see, I am a mechanical man, built by human hands to represent or typify the modern machine of industry.

Many dislike me. They say I do the work formerly done by human beings. People often point to me as the cause of unemployment – technological unemployment, they call it – because I am a creature of science or technology.

It is true that I, the machine, have taken the place of hand workers in some employments. Over here are some pictures that show why I am often feared. I admit for a period of time in each instance my appearance on the scene temporarily took away the jobs of human beings – many thousands of them, in fact.

But in spite of that evidence I am and can be a real benefactor to mankind. In almost every case where I appeared in industry I actually created more jobs and provided more employment for men and women. 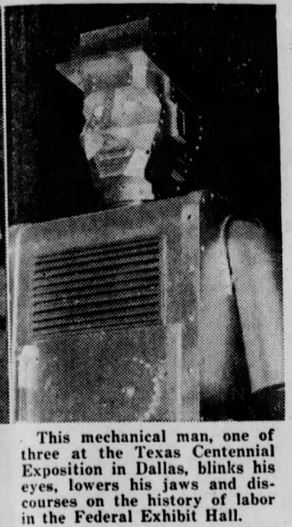 Somebody in Washington thought the mechanical man – one of the few never to be gifted with a nickname – was a hit big enough to take on the road. He shows up through 1940, at least, making an appearance at the American Negro Exposition in Chicago, billed by the city’s African-American newspaper, the Chicago Defender, as the “first real Negro World’s Fair in history.” A publicity show with the caption, “the American Negro Exposition, being held in Chicago’s Coliseum, is a regular World’s Fair for the people of the Negro race, who have crowded the large halls with exhibits on religion, music, sports, science, industry, art, and the stage. Maudelle Bousfield, of Chicago, and Samuel Evans are shown viewing the mechanical man exhibit in the science department,” confirms the showing. 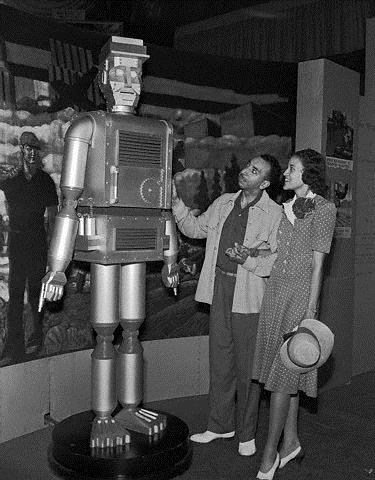 No records appear to document his travels after Chicago. He probably was donated to a metal scrap drive in a show of patriotic duty when the war started. Verne A. Zimmer, stayed a major Washington name throughout the war as the Director of Division of Labor Standards until a heart attack killed him in 1946 at the age of 60. I’m retroactively naming the mechanical man Verne in his honor.

Was hoping someone else would write an intelligent insightful appreciation of your article. I enjoyed it immensely. When I was vey young I LOVED robots. A secret desire is to own an Ideal Robot Commando even if it doesn’t work but they are pricey. I had never heard of ‘Verne’ so this was a revelation and a delight and I totally understand the mindset of dear Uncle Sam trying to keep the masses happy while up to stuff–so to speak. Written with a smile (AF veteran here.)

Thanks for the compliment. I hope you check out the other robot articles I’ve done here because I have just as much fun writing them. I have a whole book about robots coming out next year and I found dozens of crazy lost robot stories. I’ll keep these outtakes from the book coming. The weirdness never ends.