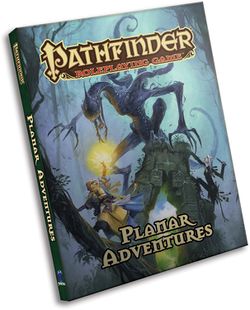 For as long as it has existed, Dungeons & Dragons (and its spin-off game, Pathfinder) have not been about a single world, but a multiverse of different worlds and dimensions. The entities that exist within these realms can be good or evil, or sometimes merely strange and exotic. But regardless of their precise nature, they are distinctly other than us, because these different realms and dimensions are governed by rules different than event he fantasy rules that govern the main adventuring worlds.

As Pathfinder First Edition begins slowing down its cycle of new rules releases, paving the way for the upcoming Pathfinder Playtest starting at GenCon and, ultimately, the release of Pathfinder Second Edition at GenCon 2019, it’s good to see that their final First Edition hardcover rulebook release, Planar Adventures  (Paizo, Amazon), provides a mix of setting material that will be broadly applicable to any game set within the multiverse that contains the Pathfinder world of Golarion.

Following a general tradition within Pathfinder rulebooks, the first chapter focuses on characters. There are a dozen new planar-related archetypes, such as the Azatariel (Swashbuckler champions of Elysium), the Gloomblade (a Shadow Plane-influenced Fighter), and Progenitors (Druids with powerful bonds to the First World of the fey). Character options include new feats, spells, and magical items related to travel throughout the planes.

>One of the most significant new mechanical systems introduced in this book is the concept of planar infusions. The entry for each plane, in Chapter 3, lists three planar infusions, at levels of Basic, Improved, and Greater, which correspond thematically with the type of power that is most abundant within that given plan. These infusions can be permanently available, even when not on the plane in question, with a trio of Planar Infusion feats, or be accessed for shorter periods with the three new Bestow Planar Infusion spells.

The second chapter emphasizes how to run a planar adventure, giving Gamemasters tips on how to use planar traits and thematic elements to weave an adventure that involves moving through multiple planes. This chapter is mostly focused on general advice, and so will largely be applicable to Pathfinder Second Edition. There are tables on travel time and wild magic effects within this chapter, but there’s no reason to think that those won’t also carry over fairly well into the new edition of the game. The section on religious deities include “Divine Gifts” that they can grant to petitioners who have earned their favor, but again these are usually basic modifiers that I suspect will largely (perhaps with some minor adjustments) be easy for Gamemasters to convert into the Second Edition Rules system.

The next 130 pages, though, are the real meat of the book, as you get detailed entries on all 19 of the major planes. These 6-page entries include descriptions of the realm, its most common denizens, encounter tables, relevant divinities with influence there, major locations and cities, and other guidance on what you might run into as exploring the plane. There are also 10 one-page entries on various demiplanes, like the Akashic Record, Dimension of Time, Dreamlands, and Hao Jin Tapestry. There is no shortage of material to build an adventure around in these pages.

And, of course, all of these new places require some new villains and challenges … and there are about a dozen such creatures detailed in the final Bestiary chapter, including a handful of planar races that are available as the basis for player characters.

All in all, Planar Adventures (Paizo, Amazon) is a solid setting sourcebook that will have a long shelf life for Pathfinder players and Gamemasters, whether they are sticking with the tried and true First Edition ruleset or taking the exploratory plunge into Second Edition.