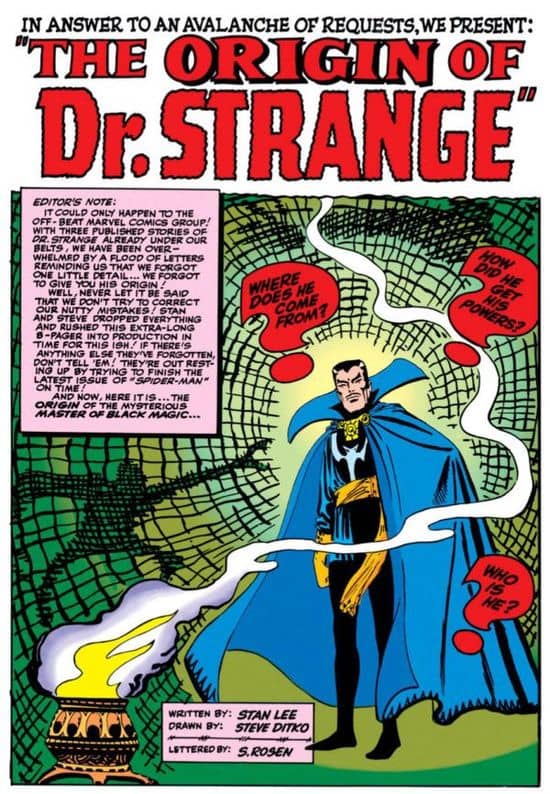 News broke last night that Steve Ditko had passed away at 90 years old. Ditko co-created Spider-Man, Dr. Strange, the Question, Mr. A (and by those last two characters was the direct inspiration for Alan Moore’s Rorschach), all of Spider-Man’s classic villains and several DC properties. He was also ironically famously reclusive. 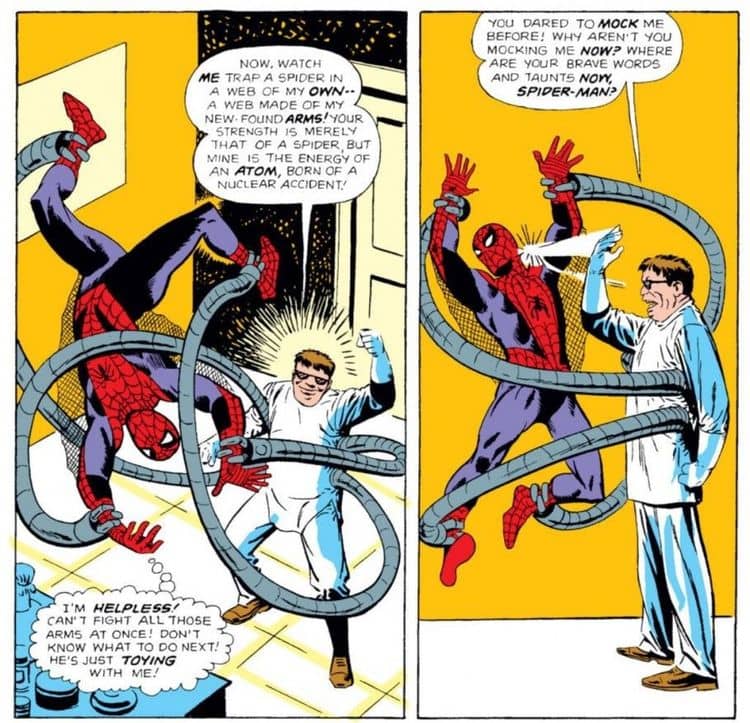 Ditko had started training as a comic book artist after World War II, and in 1953, he was hired by Stan Lee, then writer-editor of Atlas Comics, the company that would change its name to Marvel only eight years later. Ditko, along with Jack Kirby, did much of the artwork for Atlas comics, mostly in science fiction and horror short stories that fit into Strange Tales, Tales of Suspense, Tales to Astonish, etc. 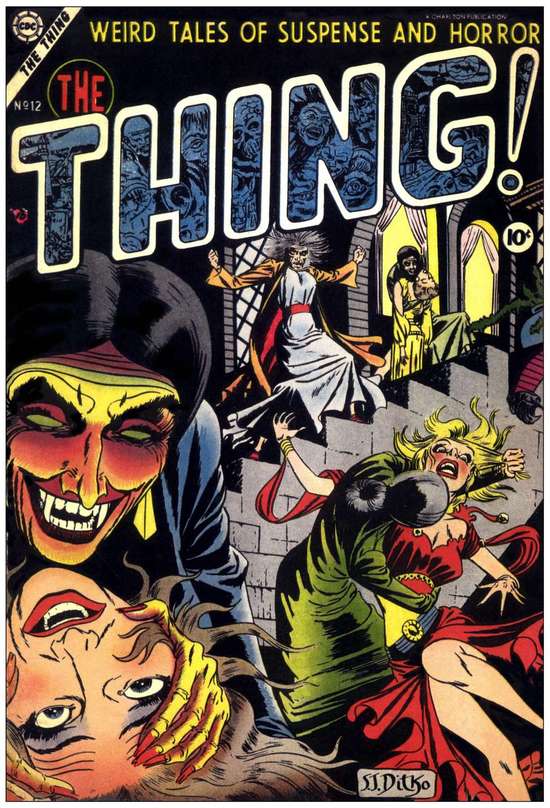 At that time, and into 1970, the predominant work method at Atlas-Marvel was for Stan Lee to give a 1-2 page treatment of a comic book story, which was handed to the artist, who did character design, pacing and the action, and some or a lot of suggested dialogue before handing back finished pencils to Lee for dialoguing. 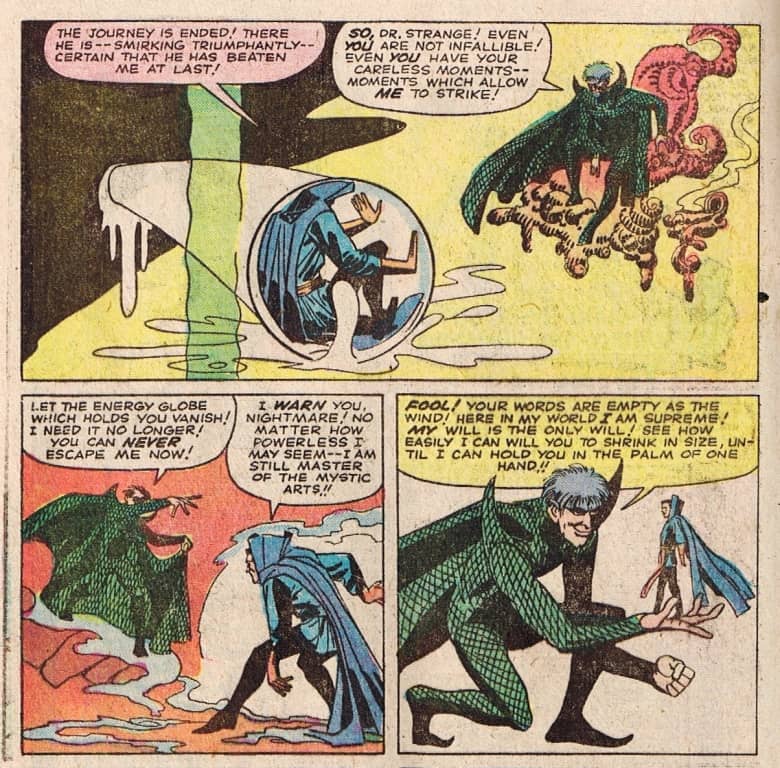 I mention the work method because much of the legends of Lee, Ditko and Kirby now seem to revolve around ownership and credit. The intellectual property provisions in comic books were very different back then. How different? Well, about 25 years before Marvel’s silver age, Seigel and Shuster sold the copyright to Superman for $130. 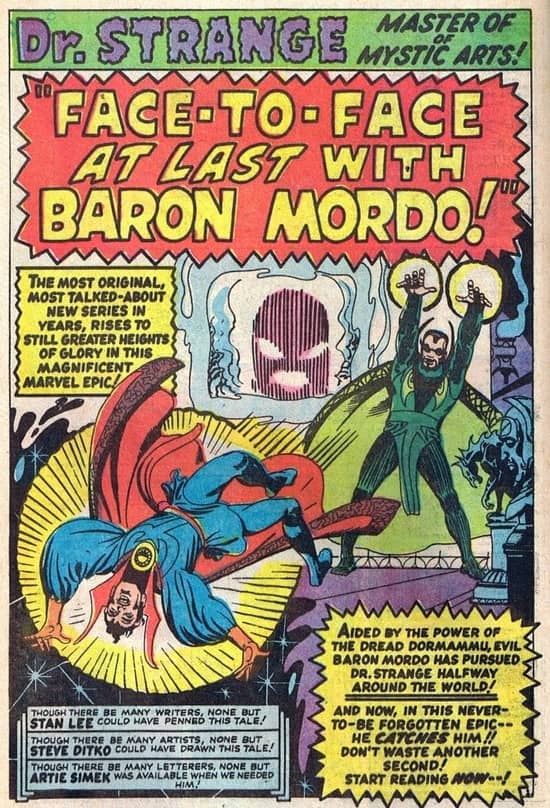 When Spider-Man, Fantastic Four, Avengers, Hulk, etc started earning Marvel real money, ownership became a source of contention. I tend to look at this whole situation as an (unfortunate) product of the times, and don’t spend too much worrying about who created what. 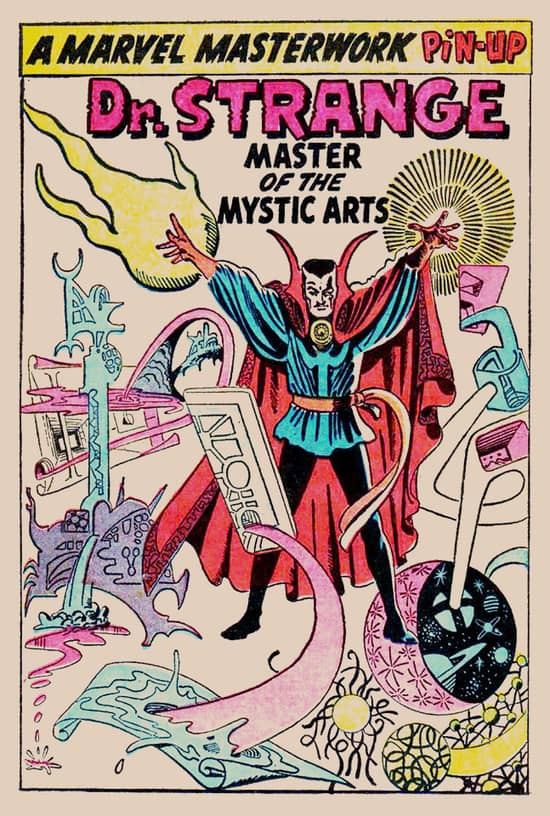 I think it’s an easy truth to say that Spider-Man was a Ditko-Lee creation. Ditko created his iconic look, set the mood for the book, created his villains, most often with suggested plots and ideas from Lee. And Lee provided dialogue and marketing that appealed to high school and college readers of the 1960s. Without Lee, Ditko’s Spider-Man might have been yelling at protesters and calling them hippies. Without Ditko, Lee’s Spider-Man would have been flat and visually uninspiring. 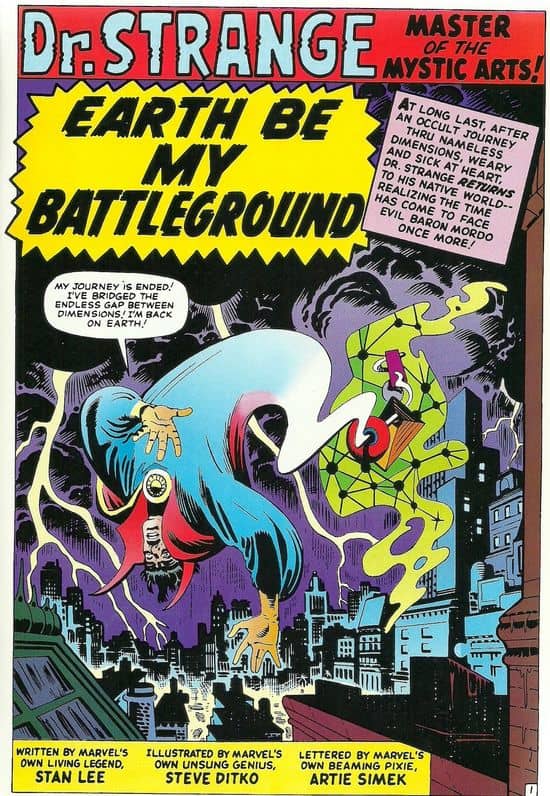 You’ll notice that most of the images for this post are from Ditko’s Dr. Strange run. I love Ditko’s Spider-Man, but I’ve always been a Dr. Strange fan, and I think some of “Ditko Unbound” best comes through in them. I blogged about my love of this run in a previous post.

Ditko in Strange Tales is surreal, psychedelic, evocative, imaginative, existential and weird in such a fun way that it’s easy to see why he was so beloved of high school and college students of the 60s.

There is no shortage of legendary comic creators who have credited Ditko as a major influence, and some of the focus in the coming days will be on Ditko’s hard rightward political shift, his break with Lee and Marvel, and his reclusiveness. If you’re curious about that part of the Marvel mythos, Jonathan Ross did an excellent documentary on Ditko for the BBC called In Search of Steve Ditko that is available on YouTube. 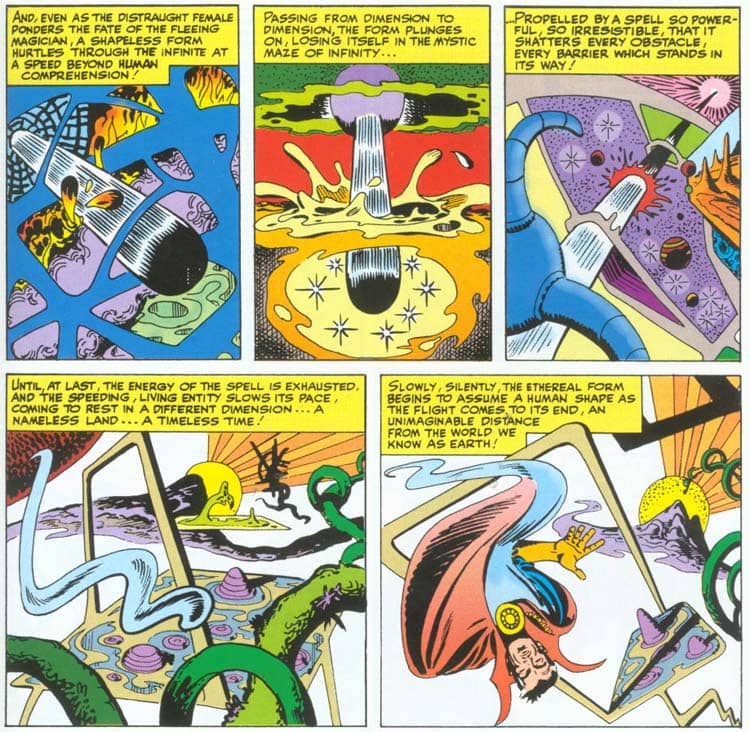 Ditko himself was against the cult of personality that surrounded some comic creators and no doubt would have just rather that fans just read and enjoy the corpus is left as his statement.

Derek Künsken writes science fiction and fantasy in Gatineau, Québec. When he was 10 years old, his mother gave him 4 comic books, one of which was Dr. Strange #43, and he was hooked. Derek tweets from @Derekkunsken.

Like you, I became a fan of Ditko’s DOCTOR STRANGE at an early age. I loved the surreal artwork and the unusual storylines. Ditko was a unique artist whose work will be read 100 years from now.

That almost always had a twist ending. I preferred them to the Kirby / Lee often giant variety monster stories.

They almost always had a twist ending. I preferred them to the Kirby / Lee often giant variety monster stories.

Cmarles Martel, I like those Lee-Ditko short stories too — is there any affordable book (or book series) where one can get a bunch of them?

Major Wootton, just a few of months ago (April?) Marvel had a sale on digital editions of many Marvel Masterworks. 4 editions each of early Tales of Suspense, Tales to Astonish, Journey into Mystery and Strange Tales were on sale for 99cents each.

Each edition had about 10 full consecutive issues of the title. Slightly less than cover price of the originals.

I see now that the digital editions are $16.99 each. Hopefully they will go on sale again but probably not at that price.

Just about the best thing you can do is hop on Ebay and buy up “reading” copies of Where Monsters Dwell. Chock full of Lee-Ditko-Kirby madness, and they often go for next to nothing.

If someone is just looking to read the Ditko Dr. Strange stuff and doesn’t mind digital, Marvel Unlimited is the best deal. I’m pretty sure it has all of the Altus era stuff that has been masterworked.

If you’re looking for print material Dr. Strange. Marvel put out an omnibus of just the Ditko material when the movie came out. The paperback collection of the same material (in Marvel’s Epic line) is coming out late this year

Thank you, Charles and Thomas, for those leads regarding the Lee-Ditko “strange tales.”

I used to have a copy of one of Marvel’s Amazing Adult Fantasy comics — I think it was an issue or two before Spider-man debuted there. It would be neat if Marvel reprinted all the Ditko material from those issues.

Yeah – I was just thinking yesterday of how lucky I was to have collected comics in the 80s – when I could pick up a lot of old issues in second-hand shops. I picked up Marvel’s 1983(?) Doctor Strange Special Edition which in 4 issues collected the amazing Ditko-Lee Dormammu run in Strange Tales. And about 10 yrs ago at a comiccon, I bought the Amazing Spider-Man Omnibus for my son – it’s hard cover and has the original 38 issues of the Ditko run and a couple of annuals I think. It was pricy, but it’s a beautiful book and we got Stan Lee’s signature on it.