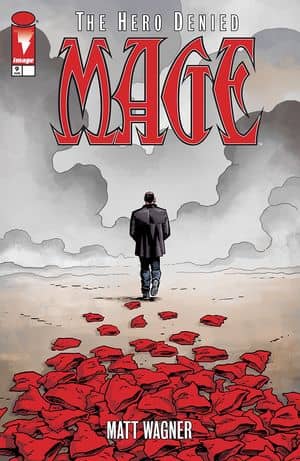 So there’s a weird thing that happens in superhero comics after they’ve been running for a while. No matter what sort of superhero we’re dealing with, how weak or powerful, eventually we start to see stories that begin with someone attacking them out of the blue, followed by the hero trying to figure out what’s happening. This happens even more often with superhero teams, since they tend to have publicly known headquarters. While these are sometimes set up as stories of revenge for some past defeat, more often it’s something along the lines of, “The hero is going to stop my evil plan, so before I even start the evil plan, I’m going to take out the hero.” Strangely, after the villain fails to take out the hero, they’ll just go ahead with the plan anyway. But in almost all of those stories, the hero wouldn’t even have KNOWN there was an evil plan if they hadn’t been attacked.

Kevin Matchstick is semi-retired at the start of Hero Denied. He has no idea that the Umbra Sprite has set up a new operation. He’s raising his kids and doing nothing that will cross his path with the Umbra Sprite. He’s not even looking for the Fisher King. Really, he doesn’t start moving until he’s attacked. And even then, he’s basically flailing about with no real focus until his wife and son are kidnapped.

So if the Umbra Sprite had just left Kevin Matchstick alone, he wouldn’t be coming after her. He wouldn’t even have known that anything was going on. Which I suppose is a lesson in how we often make bigger problems for ourselves by overthinking situations.

The issue opens with Kevin and Miranda driving through Fairy Land. Kevin’s got a dozen baseball bats in the backseat, ready to get charged up. I’m not sure how we’re meant to take that fact. On the one hand, it could mean that Kevin’s just getting ready for a lot of fighting. But since he can basically charge any object with magic energy, there is the question of why he’s chosen only to pack baseball bats instead of an assortment of weapons. Or why he doesn’t continue the habit he’s developed in the first half of this series of using improvisation to charge up whatever’s around. It might just be that he’s grasping for something familiar and comfortable as his world is torn apart.

Continuing with the “embracing the familiar” theme, we once again see the red caps, now gathered in a crowd of hundreds. The fight lasts less than three pages and even Kevin admits that it’s not really a fight at all.

Switching scenes, we see the Gracklethorns talking about Kevin. Again, Karol is the only one among them not anticipating an easy victory. The fact that the Umbra Sprite is currently a mass of mute, writhing serpents doesn’t fill her with confidence either.

Moving on, we see that Magda and Hugo have settled in to their penthouse prison. Hugo’s watching cartoons while Magda is changing outfits. It’s a weird scene where Matt Wagner is clearly providing us with exposition by having Magda tell Hugo a bunch of stuff that he probably should already know. Between all five Gracklethorns, only Karol is taking Kevin seriously as a threat; but it seems like even Karol has underestimated Magda, which is how she still has a magic pendant, which she plans to use only as a “last resort.” While Magda is telling her son about why they’ve been kidnapped (again, stuff that should have been obvious to him after last issue), a tray of food magically appears. Magda reminds Hugo that all of the tasty-looking food is really fairy food and, if they eat any of it, they’ll never be able to leave; only the food that looks like garbage is safe to eat.

While Hugo comes off as being kind of stupid in that scene, far and away the most jaw-dropping out-of-character scene happens when Kevin and Miranda visit Magda’s sister, Isis. We first saw Isis in Hero Defined and she was the one who initially introduced Kevin and Magda to each other. Now she’s living in a TARDIS-style library with a purple cat (similar to the one that died in Kevin’s house … maybe they’re related). While she’s initially shocked to hear that Magda has been kidnapped, she quickly reassures Kevin that, if her sister had died, she would have sensed it. She then hands Kevin a magic mirror, telling him that Magda will try to reach him and that the mirror will provide a strong conduit for that contact to be made. Kevin then tells Isis that he’s not going to wait for Magda to contact him, instead going on the offensive in search of the Umbra Sprite’s lair. He’s anticipating a lot of fighting and asks Isis to take care of Miranda.

And Isis says no.

She offers some explanation involving a magic book that she needs to translate and how it just can’t wait, so Kevin apologizes for asking and goes on his way. While Isis has always been portrayed as rather dedicated to the academic side of magic, refusing to watch over her niece (or indeed to help search for her kidnapped sister in any direct way) just seems callous. The fact that Kevin takes it in stride either means that she’s done this sort of thing before or that he’s just so focused on finding his wife and son that he doesn’t have time to fight with his sister-in-law.

The issue ends with Hugo waking up in the middle of the night to eat a piece of fairy cake. I can only guess because he was knocked in the head a few times when the redcaps took him a couple of issues back.

I’ve mentioned in the past that many of the characters in the Mage series are analogs to people in Matt Wagner’s real life. Of course, they never match up exactly; for example, Kirby Hero is dead, but the real-life artist he was based on (Bernie Mireault) is still alive. This makes criticizing the title a bit precarious, since Hugo comes off like a total moron in this issue, but I’m sure that Matt Wagner’s real-life son would be smart enough not to eat fairy food after being warned. Isis comes off like a cold-hearted bitch, but I’m sure that Diana Schutz (Matt Wagner’s real-life sister-in-law) loves spending time with her niece and would never abandon her sister to demonspawn.

Magda and Karol still have their heads in their respective games. Miranda is coping as well as can be expected and, far from hindering Kevin as the Gracklethorns expect, is keeping Kevin focused and calm by reminding him about what’s important. But the rest of the characters (Isis and Hugo on Kevin’s side, the Umbra Sprite and the remaining four Gracklethorns) are either completely useless and/or completely clueless. Of course, still unaccounted for are the Mage and Magda’s other sister.

The Questing Beast and the Fisher King are also still out there, just being themselves with seemingly no plots or schemes of their own, like a pair of MacGuffins who really aren’t relevant to the plot. After all, Kevin is trying to save his family and part of that will likely involve defeating the Umbra Sprite and Gracklethorns … the Fisher King and Questing Beast probably don’t even have to appear for him to do that. But it would be pretty disappointing if they didn’t.

At this stage, there are only six issues left until a series that was begun over thirty years ago is finally wrapped up. With Magda and Hugo getting kidnapped, the last third of the Mage trilogy finally picks up the pace. If you’re following this series, let me know what you thought of this latest issue.