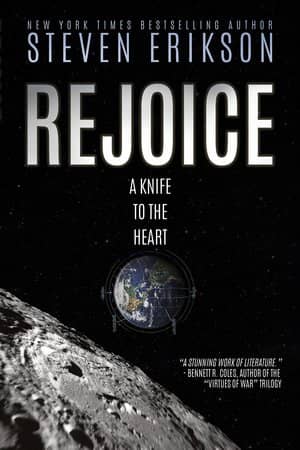 I’ve been a Steven Erikson fan for a long time, ever since a friend handed me the first Malazan novel, Gardens of the Moon, when I was in university. You might have seen on here a few months ago that I had the pleasure of meeting and hanging out with Steven at Can*Con in Ottawa, where he was Author Guest of Honor. That whole experience was cool all on its own, but following that I got the privilege of reading an ARC of his forthcoming novel Rejoice: A Knife to the Heart, which Bennett R. Coles has already called “a stunning work of literature.”

Honestly, the literature side of Rejoice is what surprised me the most. In our interview, Steven and I talked about how his first publications before Malazan were literary, which struck me since it’s rare for authors in our industry to jump genres like that. But what’s particularly interesting with Rejoice is that he takes the large-scale worldbuilding, extensive cast of characters and air of mystery of his fantasy work and applies is to the present day – or a twist on the present day, involving Earth’s first contact with an alien race. The novel’s already been described as “a first contact story without contact”; since this isn’t Independence Day or Close Encounters, the focus is instead on us, and how we’d react if an alien intelligence showed up and gave us a chance to improve ourselves.

That might sound like this is a novel that preaches or proselytizes, but it really doesn’t. Instead what you see is snapshots of people’s lives around the planet, from politicians to scientists to media tycoons to refugees in developing countries, all facing situations beyond their control (and almost their comprehension) and needing to decide what they should do about it. If you’re hoping for flashy energy weapons or epic journeys like in the Malazan books, you won’t find it here – but the debates and conversations between the characters in Rejoice, and the steps they take in response to this alien influence, are often tense and always intriguing. At the end of the day, a lot of our way of life (regardless of political ideology or religious belief) is about having some measure of control over our lives, and when that’s taken away very interesting things can happen.

Rejoice isn’t without its pointed appeals to certain types of change in our society (which I’d agree are necessary). There are characters who are obviously meant to represent specific viewpoints, including populism and extreme nationalism, but to me that’s done for balance, and it’s done well. That this is a novel with a point is one of its greatest qualities. And I think this is the kind of novel we need since, much like the real world, the decision about humanity’s future stays with humanity, and the question throughout Rejoice is: what future are we going to choose?

An Ottawa teacher by day, Brandon has been published in On Spec, Third Flatiron Anthologies, and elsewhere. His short story, “Moments,” can be read for free on Daily Science Fiction. Learn more at brandoncrilly.wordpress.com or on Twitter: @B_Crilly