I saw Solo: A Star Wars Story today. I hadn’t planned on it, but my brother wanted to go with his son and my son wanted to see it too. I’m feeling a tiny bit block-bustered out with this being the second or third Star Wars movie in 18 months, in the context of two or three major superheroes movie in the same period.

Or maybe I’m still a bit jet-lagged? Or cranky? Ontario, which I can see from my bedroom window, just made an asinine electoral choice and maybe the ache is still in the air? 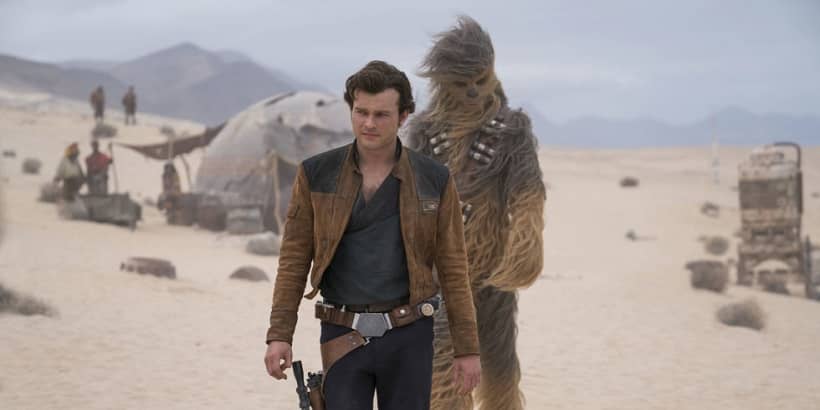 My expectations were low to start with, and I’d heard that it hadn’t been having stellar box office receipts — I think I saw one report that expected it to net $450M. So from all this, you’d expect me to say it sucked?

Not at all. It’s a heist set in Lucas’ Star Wars-verse with great special effects, a good director (Ron Howard, after some directorial changes), a wookie and Lando. The action was fast-paced, sometimes overly so, with some fun twists and turns as you’d expect in a heist story. 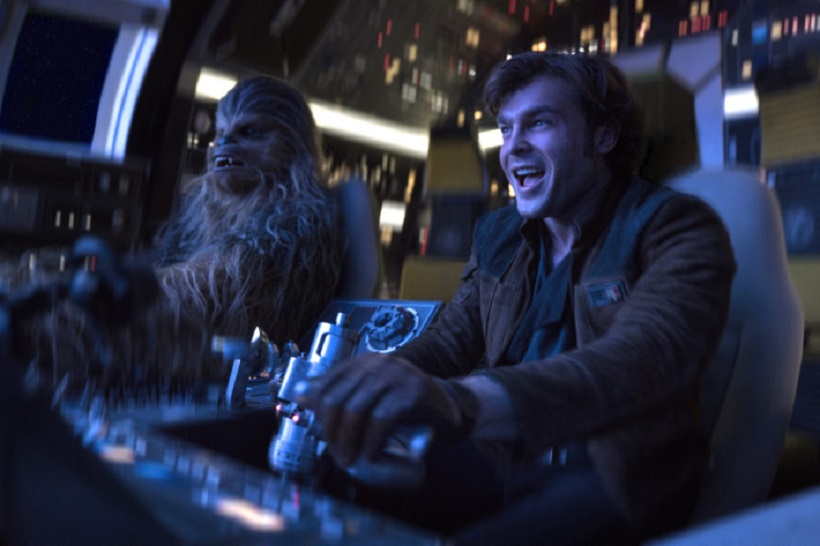 The characters on the screen were vivid, especially Donald Glover as Lando Calrissian, Emilia Clarke as Qi’ra, Joonas Suotamo as Chewbacca, and Phoebe Waller-Bridge, who voiced the emancipation-obsessed droid L3. 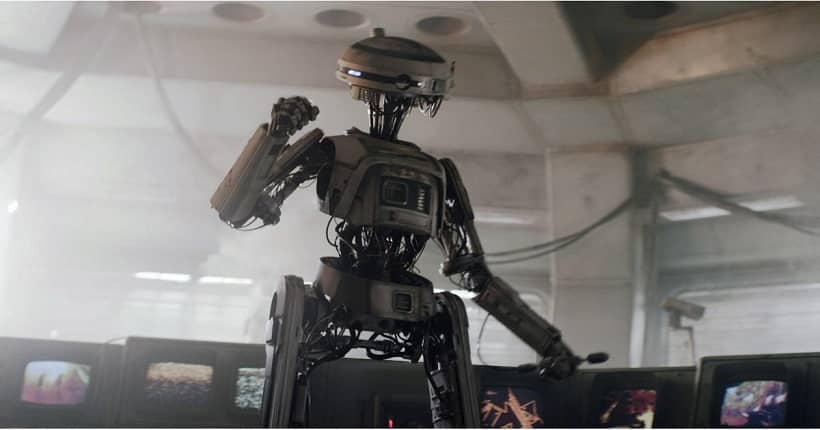 In fact, Lando and L3 were scene-stealers throughout. And Woody Harrelson did a fine job as the senior heist chief, and Paul Bettany was a believable, effective mid-level gangster lord. 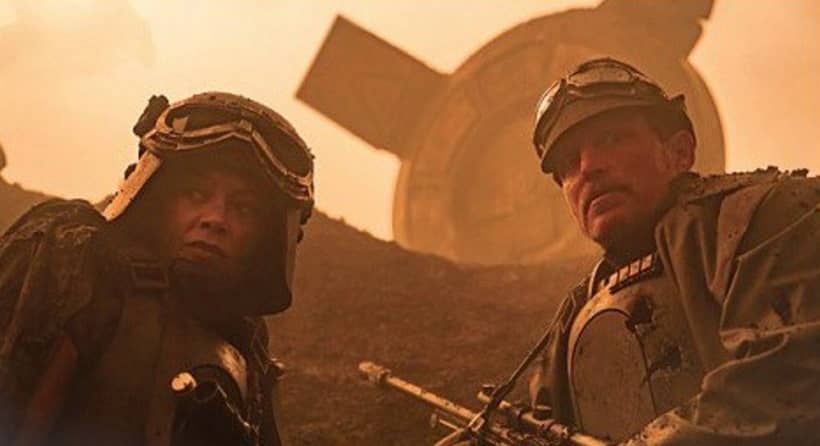 There were beats and moments, though, where my writer brain began to analyze the story as it was happening, telling me, for example, that the card game looks like it’s going to end in Way A, therefore to “surprise” me, the writers will have it end with Way B. Yeah. Way B was not a surprise. As most blockbusters do, more than a few of the major beats were off-the-shelf.

Now, to go see a popcorn blockbuster or a superhero movie, I expect a certain amount of standard plot devices and resolutions, but maybe the reason these were more noticeable today was because I didn’t feel the story had a very strong spine. 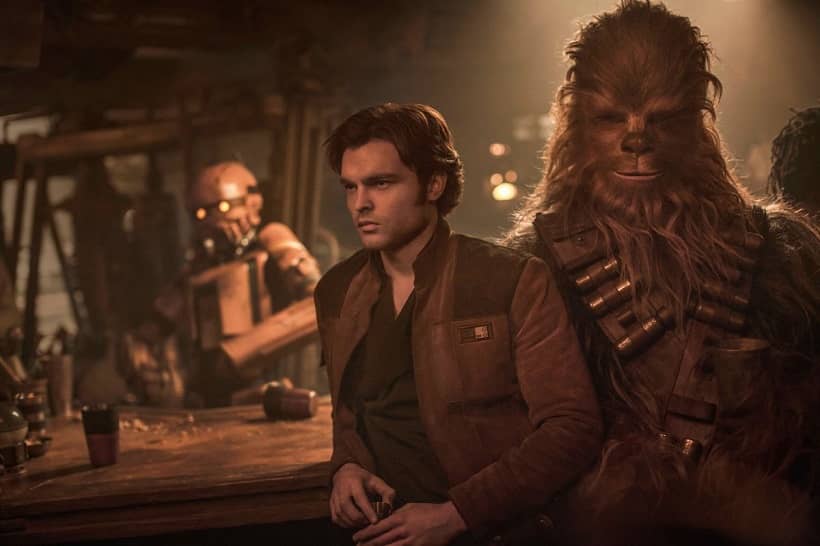 The story is episodic, and it was sometimes hard, as one wacky thing happened after another, to remember why Han Solo was doing what he was doing or why he wanted what he wanted. 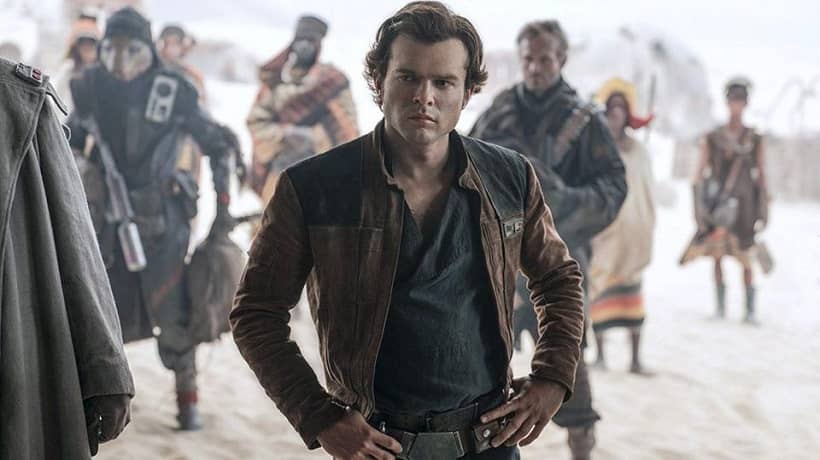 In fact, his motivation, while stated a few times, never struck me as all-consuming as the story really needed, and so many of the situations seemed to be vaguely logical in retrospect, but kind of confusingly tacked-on in the moment. 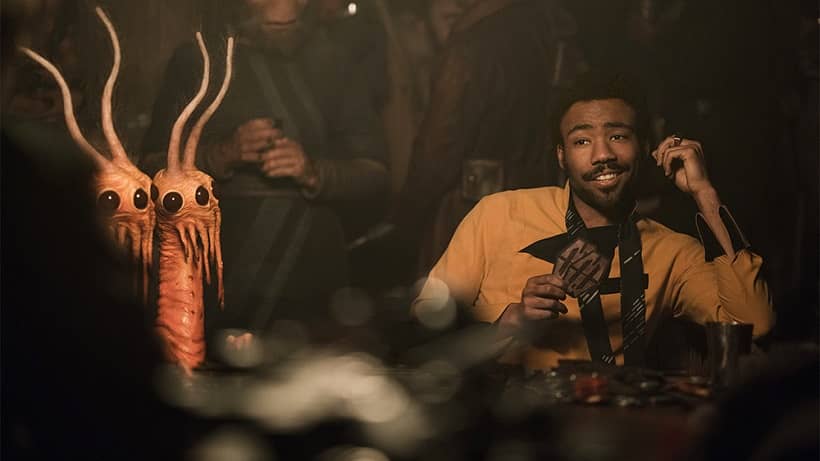 But then again, what are we going to blockbusters for? We’re not looking for Oscar contenders among our popcorn movies, and so if I keep that in mind, Solo: A Star Wars Story works just fine. But I doubt I’ll add it to my list when it eventually gets to Netflix.

Derek Künsken writes science fiction and fantasy in Gatineau, Québec and won the Asimov’s Award a few years back. His first novel, The Quantum Magician was launched last month in Chinese and will launch in English in October. He tweets from @derekkunsken.

My wife and I liked it quite a bit more than you did. The fact that we’ve seen it four times already speaks to how much we enjoyed it. I thought all the actors did a great job, and Alden Ehrenreich made the character of Han Solo his own. The story was not the strongest but the fun factor more than made up for that. It was a very entertaining time at the movies.

I am not the biggest fan of the prequels but I have liked every new Star Wars movie that’s come out since Disney bought out Lucasfilm. They all end up on my Bluray shelf, and Solo will be no exception. It sucks that more people are not giving this movie a chance because I would have loved a sequel with these characters.

When people rag on the show, ‘Elementary,’ I tell them it’s a police procedural with a Sherlock Holmes overlay. And it works in that light.

In that vein, Solo is a heist/caper flick (which you pointed out several times) with a Star Wars overlay. And in that light, it works.

The problem is people are so ridiculously over-invested in Star Wars (and superhero movies) that they treat it like one of the most important elements of their lives (much like Americans do with college and pro football).

I’m not just talking about the fanboys and haters – I mean young and grown adults who should have some sense of relative importance. It’s a movie series. Get that emotionally involved in something that will actually impact the world and other people. Don’t spike your blood pressure on a scifi film because it didn’t meet your expectations/desires/needs.

So, if someone JUST looks at it as a movie, combining the science fiction and caper genres; with a Star Wars setting – it’s pretty fun.

It’s really interesting – usually critics hate something even if the audience likes it…traditionally. I used to find my favorite movies with “Golden Turkey” style awards… These new product with the label “Star Wars” Disney bought from Lucas seem to get high reviews – even if they flop abominably with the audience…

Of note – Last Jedi. Even the audience score is worse than shown. 9 out of 10 reviews are 1 star or less – out of thousands. Some YouTube guys checked it out, doing the math on a random 100 and found it should have 11% or less. Solo seems better but likely the “last jedi” victims didn’t want to subject themselves to it again.

So, I’ll ask – is there anything contributing to this review? Money paid? Or, if you gave a mild negative review such as “My Eyes, they BLEED!” would it hurt the next TOR book deal?

I saw Solo three times in the theater, and while I wasn’t blown away by it, I found it solidly entertaining fare.

I also enjoyed The Last Jedi, although it was not without its flaws.

Having said which, which seems the more likely: That there is a sinister cabal of movie critics and book publishers suborning critics to give good reviews to (no doubt deliberately) bad movies, in an effort to separate virtuous fans from their hard-earned dollars?

Or that the “audience score” is being deliberately tanked by a non-representative bunch of angry, bitter dudes who apparently have nothing better to do with their time than post online reviews of movies they hate?