Edward Bryant died last year, at the age of 71. He was widely acclaimed for his short fiction, and published some 121 stories between 1970 and 2017. He won back-to-back Nebulas, for “Stone” (1978) and “giANTS” (1979). Wikipedia notes that “By 1973, he had gained acclaim for stories with a conversational style that mask rather dark realities,” and that seems right to me. His produced a single novel, Phoenix Without Ashes (1975), co-written with Harlan Ellison. After his death Mad Cow Press published the tribute anthology Edward Bryant’s Sphere of Influence, with fiction by Connie Willis, Steve Rasnic Tem, Kevin J. Anderson, Lucy Taylor, Bruce Holland Rogers, and many others.

I knew Bryant chiefly as a book reviewer, and he was excellent, somehow blending both a discerning eye for fiction with an infectious enthusiasm for the genre. He published many hundreds of reviews — have a look at his entry at the Internet Science Fiction Database, and you’ll begin to appreciate just how deeply Bryant explored the fiction he loved. I was a regular reader of his book columns at Locus (1989-2006), Twilight Zone Magazine, (1987-89), and especially Cemetery Dance (1990-98).

Recently I’ve become more interested in reading his short stories, though. He published half a dozen collections, including Among the Dead and Other Events Leading Up to the Apocalypse (1973), Cinnabar (1976), and Predators and Other Stories (2014). But his major collection appears to be Particle Theory (Timescape Books, 1981), which includes both of his Nebula Award-winning tales, plus no less than five other Nebula nominees (the title story, “Strata,” “The Thermals of August,” “Shark,” “The Hibakusha Gallery”) and three Hugo nominees (“The Thermals of August,” “Stone,” and “giANTS”). 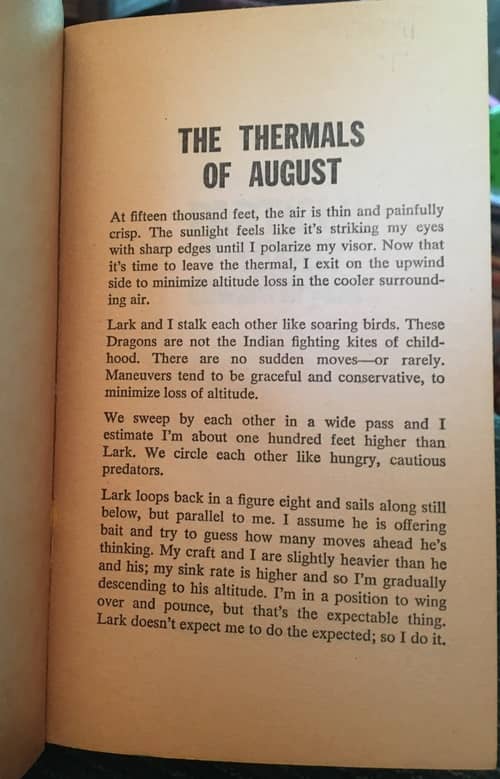 It’s been a very tough find, however. I’ve never come across a copy in many years of combing bookstores and conventions, and an eBay Saved Search proved fruitless at finding a reasonable priced copy for years. Patience is rewarded, however, and I eventually found the copy above on eBay in March for $6.50. It is in perfect shape.

I look forward to dipping into it this weekend. I wasn’t sure what story to start with, but the inside flap (above) has a very appealing excerpt from “The Thermals of August,” the cover story for the May 1981 issue of The Magazine of Fantasy & Science Fiction. I’m sold, and I think I’ll start with that one. 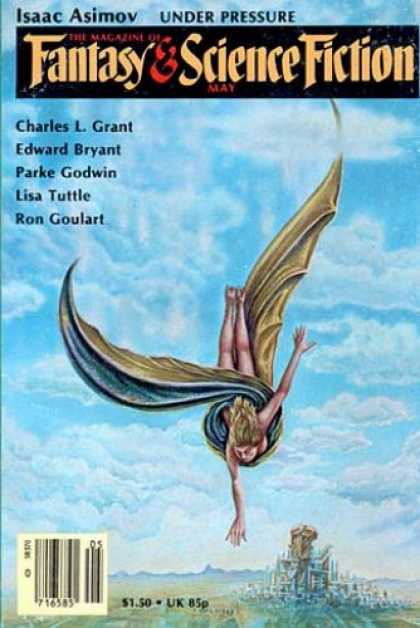 Particle Theory was published by Timescape/Pocket Books in October 1981. It is 252 pages, priced at $2.95 in paperback. The wraparound cover is by Richard Powers.

“Shark” is an absolute knockout of a story, equal – and similar in manner – to the best of Tiptree.

Bryant’s early stories, mostly represented in this collection and in CINNABAR (for example, “Their Thousandth Season”) are remarkable. Alas, he never really delivered on what looked like it would be a major career, to a great extent, I suspect, because of health problems.

“Particle Theory” itself really knocked me out when I read it in ANALOG.

I’ve heard a lot about Ed’s health problems, but I don’t know any details.

Ed Bryant was perhaps the reviewer I paid the most attention to during the 80s and 90s. I got used to having in voice in my head every month, usually in LOCUS and CEMETERY DANCE. His taste seemed very similar to mine, in that he loved both SF and dark fantasy/horror. Although I’m not likely to ever see one, I’d love to have a collection of his book reviews.

You convinced me to order a copy of Particle Theory from ABEbooks. Other copies are still available. Reading the beginning of the story from the page photo made me think of “The Menace from Earth” and “Cloud Sculptors of Coral D.” When I often dreamed of flying. They don’t come anymore.