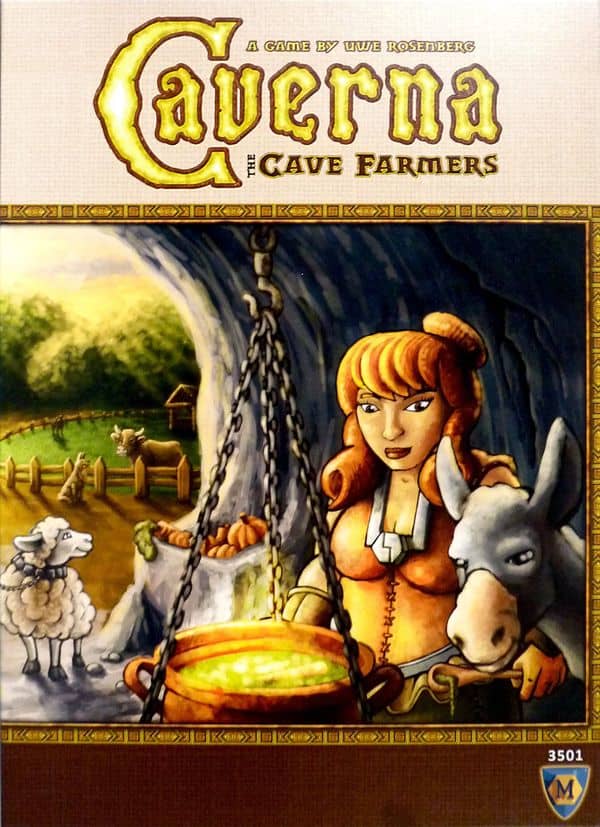 I’ve heard a lot about the top-selling Agricola. It was the board game that finally ended Puerto Rico‘s five year-rein as the highest-rated game at BoardGameGeek, and it thoroughly dominated the rankings from September 2008 until March 2010. It certainly sounds like something I should investigate, but I have to admit it’s hard to work up much enthusiasm… I mean, just how much fun can it be to simulate a farming couple living in a two-room hut?

As you can probably imagine, I was much more intrigued by Agricola‘s sequel Caverna: The Cave Farmers, which changed up the setting and added a fantasy veneer, putting you in the role of dwarves leading tiny family clans in mountain caves. The reviews have been pretty promising; Shut Up & Sit Down said:

The sequel to Agricola is here, and it’s the heaviest and most expensive game we’ve ever reviewed. A titan of the table.

There’s no question. Caverna: The Cave Farmers is the most fun you’re going to have managing animals, minerals and vegetables.

Wait, are they being snarky? It’s hard to tell. Only one way to find out for sure.. I finally took the plunge and shelled out $80 for a copy of Caverna, and it arrived today. And wow, this thing is gigantic. 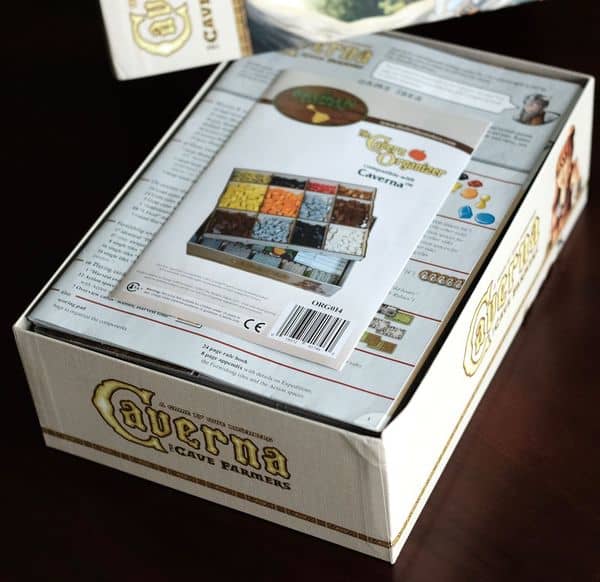 Amazon says Cavena has a shipping weight of nearly eight pounds, and it certainly feels like it. This must be one of the heaviest board games I’ve ever purchased.

The box is chock-full of very sturdy components, including solid wooden meeples, thick linen-textured cardboard, sturdy gloss cards, and well-designed rulebooks. You certainly feel like you get your money’s worth. 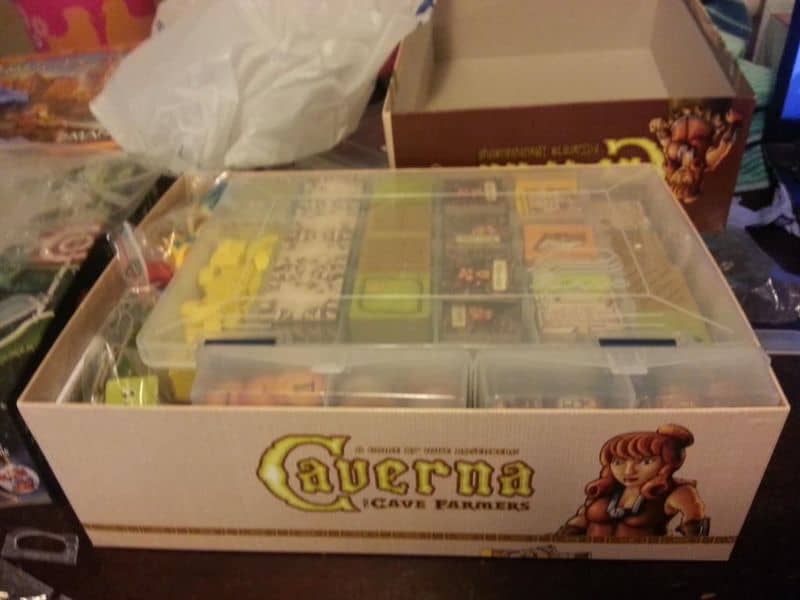 The rules do a fine job setting up the scenario:

Caverna is a development strategy game for 1 to 7 players aged 12 and up… In this game, you take the roles of adventurous dwarfs living reclusively in caves where you dig for ore and rubies and furnish caverns to become living and working areas. You need ore to craft weapons to undertake expeditions in search of adventure and loot. Rubies are a valuable and highly flexible good: you can trade them for other goods and landscape tiles at any time. Outside your caves, you will look after your sustenance by felling trees, raising farm animals and doing some agriculture. At the end of the game, the wealthiest dwarf will win. 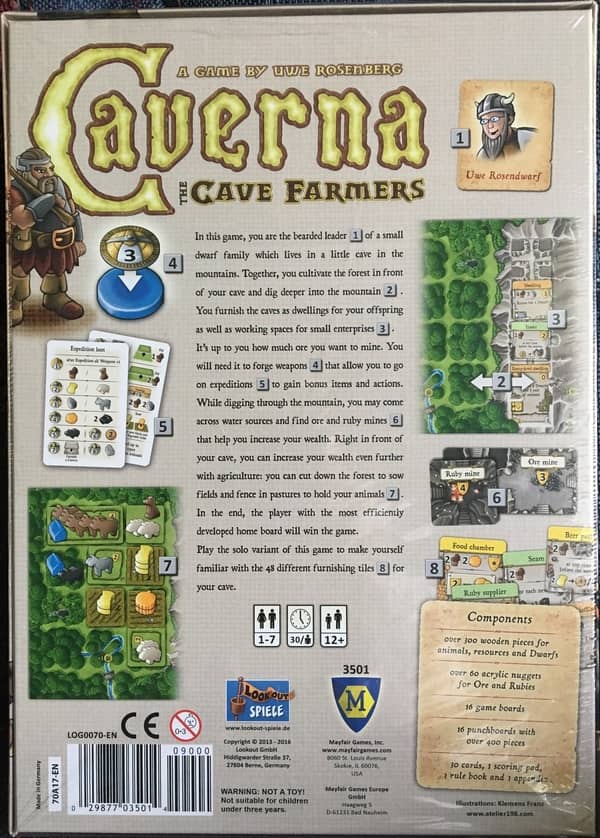 RPG.Net has a nice review of the game; this is from the intro:

Caverna is a variant of Uwe Rosenberg’s extremely well-received Agricola (2007). The biggest changes are: the fact that furnishings are available to everyone, replacing the random cards of Agricola; and the expeditions. However, the game has been totally revamped. Harvests, for example, occur much more often, while rubies make it easier to acquire missing items, and generally a lot of the tasks have become easier to do (because, for example, there’s no longer a need to separately clear fields: you just place a tile). On the whole, the play of Caverna feels a little bit streamlined from Agricola, but it’s still a tough, dense, and complex [game].

One thing I learned straight up: this game requires a lot of room. 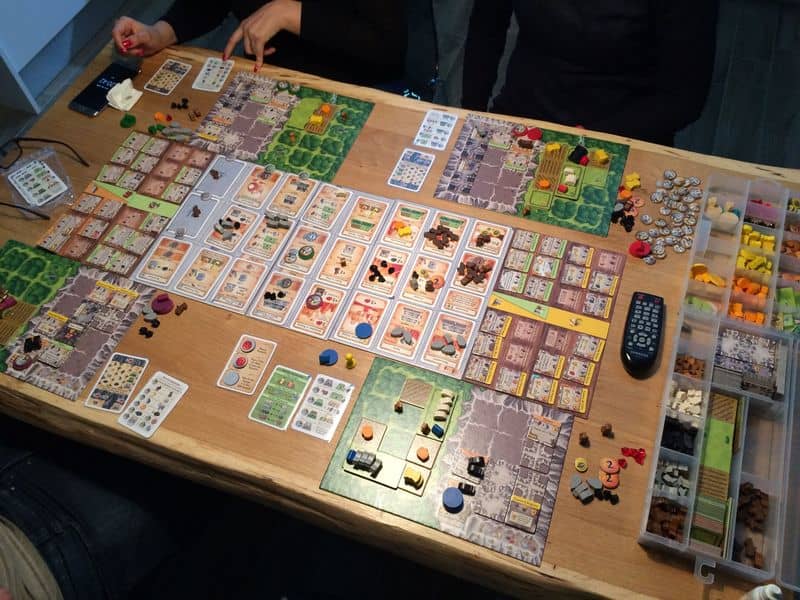 Also, it’s not the kind of game I recommend playing if you have a cat that likes to jump on your table.

There are just to many playing pieces that double nicely as cat toys. 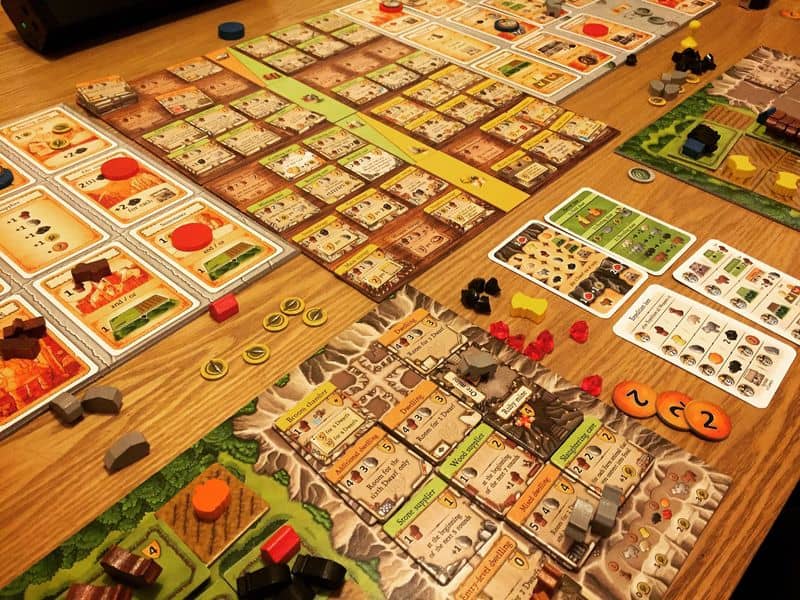 The learning curve is a bit steeper than I would like. But one of the best elements of Caverna is the solitaire option, which makes a terrific introduction to most of the basic concepts, and which you can play through at your leisure. Once you’re comfortable with the core concepts, it’s easier to move on to the multi-player version. 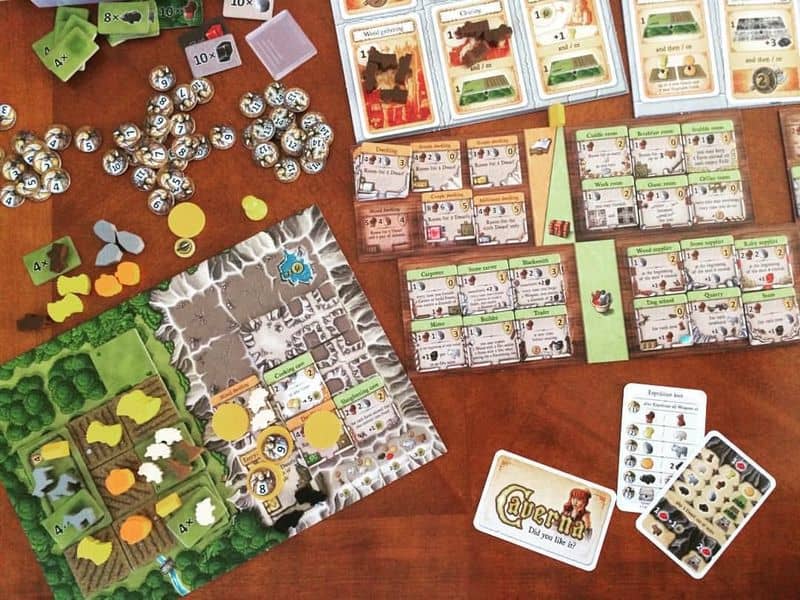 The Opinionated Gamers has an excellent, detailed review of the game. Here’s a few of the highlights:

In addition to what we’ve seen in Agricola (adding living spaces, expanding the clan, change start player, farming, collecting food and resources, etc.), the newest actions allow players to build mines, collect rubies or ore, create weapons, and go on expeditions. Furnishings allow players to expand their cave dwellings in various ways. Here is one of the biggest departures from Agricola: tiles are used to enhance dwellings (rather than cards) and all tiles are available to players during the game. Of course there is only one copy of most of the tiles and once taken by a player, that tile is no longer available to the others….

I really like the changes over Agricola. Having all furnishing tokens available remedies the luck factor from card draws of the original game… Rubies as wild cards is one of my favorite additions. Be sure to keep a couple of rubies on hand in case of emergency! If another player stole… I mean, built the furnishing you were saving up for, having a couple rubies on hand to exchange for other resources means you can build something else in that newly renovated cavern. Run out of food? A ruby will buy food for one dwarf (assuming dwarves don’t actually eat the rubies themselves). One ruby can also mean getting to an expedition first by allowing you to play your best armed dwarf out of order.

Speaking of expeditions – love them! They allow dwarves to get some great loot; the higher the strength, the better the loot. At level 14, a dwarf on an expedition of 2 or more could both place a cavern and furnish it if he had the right resources. One possible advantage Agricola has over Caverna is that there are so many more cards and possible combinations, providing much more diversity. In every game of Caverna you see all the tiles, which may make it less interesting the more it’s played. Maybe there will be expansions, although they will likely cost more than the deck of card expansions for Agricola since they will be tiles, likely with a matching board if they stick with the same design.

If you want a somewhat lighter worker placement game than Agricola but with much the same feel, I highly recommend Caverna. I do enjoy both games but if I don’t want so much brain-burnery goodness, I will be reaching for Caverna. 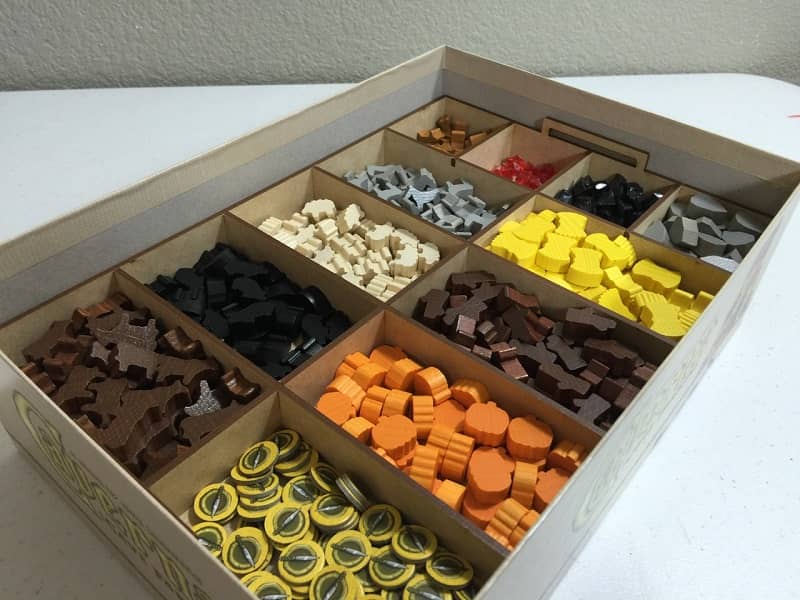 That’s a lot of stuff in a very heavy box

In the five years since its release, Caverna has won multiple awards and currently sits just atop both Puerto Rico and Agricola in BoardGameGeek‘s ratings chart.

I haven’t played a full version yet (and it may be awhile before I do.) But I can already see the game is simple at heart, but with a delicious opportunity for play complexity — and a very different take on traditional fantasy.

Caverna was designed by Uwe Rosenberg and Lookout Games, and published in English by Mayfair Games in 2013. The art is by Klemens Franz. It is $97, and weighs nearly 8 pounds.

See all of our recent game reviews here.

Ah, Shut Up and Sit Down, the Top Gear of gaming, which does mean it comes with a full tank of snark.

Not that somebody who discusses Caverna in terms of “animals, vegetables, and minerals” needs much instruction in the hunt of the snark. Well, the game is bigger than a breadbox.

I see that you’re a believer in after-market organizers (I approve!). What are those plastic trays in the top of the box in the second picture?

I covet your game table. That’s a beauty. And Caverna looks pretty good, too.