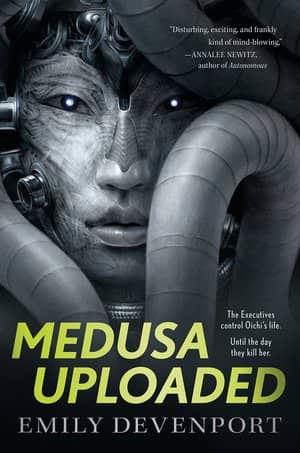 Under the name Maggy Thomas, she was a finalist for the Philip K. Dick Award for Best Novel, for Broken Time (2000). She’s also produced two novels set on the Belarus planet under the pseudonym Lee Hogan.

But it’s been fifteen years since she’s published a novel, so anticipation is high for her new book Medusa Uploaded. Most of the major genre sites — including io9, The Verge, and Kirkus — have selected it as one of the most interesting books of the month. It arrived in trade paperback from Tor last week.

My name is Oichi Angelis, and I am a worm.

They see me every day. They consider me harmless. And that’s the trick, isn’t it?

A generation starship can hide many secrets. When an Executive clan suspects Oichi of insurgency and discreetly shoves her out an airlock, one of those secrets finds and rescues her.

Officially dead, Oichi begins to rebalance power one assassination at a time and uncovers the shocking truth behind the generation starship and the Executive clans.