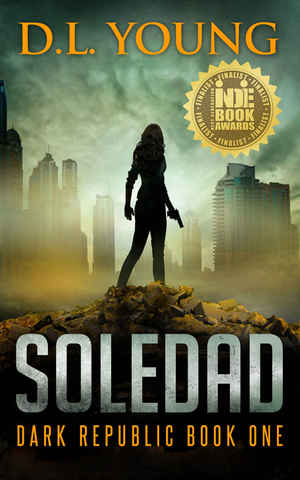 Planning on throwing yourself into the community of science fiction and fantasy writers? In North America, at least, be prepared to start humming, “It’s a Small World, After All” every time you go to a conference or festival.

When I was first breaking into the short fiction market, two of my stories appeared in Tides of Possibility, an anthology published through the Houston Writers Guild. It was in that anthology that I first came across a story by D.L. Young, “The Reader,” which among a solid collection really jumped out at me.

That was 2014. I went about my business, occasionally seeing tweets and posts by Young and other Tides contributors until they stopped showing up as often in my feeds, courtesy of analytics. Then this past fall at World Fantasy in San Antonio, I walked past a dealer’s room booth with D.L. YOUNG displayed on a big poster, and realized, “Holy @#$%, I know that guy!”

Which is the long version of how, after catching up with Dave about writing and whatnot, I ended up with a copy of Soledad, the first novel in his Dark Republic series. It’s a blend of near-future post apocalypse with what could be considered fantasy, focused on a young woman surviving in a blighted version of Texas, surrounded by people who want to use her ability to “read” people and determine their lies. Through a desperate quest for answers, we see a potential future where natural gas is gold, the United States wants nothing to do with Texas, and a sharp dichotomy between rich and poor is shown via Dallas, the last bastion of high-tech civilization in the region.

This is the point when I will honestly admit that it’s rare for a self-published book to really blow me away. There are a lot of reasons for that (which might be good material for another post) but for anyone who might be leery of self-pub in today’s oversaturated market: Soledad is an awesome novel. It’s got complex characters that blur the line between hero and villain and maintains a quick and effective pace with twists that I genuinely didn’t see coming.

It also presents the Texas/New Mexico region and its inhabitants in a way that feels authentic and avoided stereotypes, from the brutal warlord El Flaco, who quotes revolutionaries as a smokescreen to motivate his followers, to Soledad’s determined bodyguard Lela, whose tragic backstory gradually comes to light as her motivations become clear.

All of this to say: amid an ongoing glut of post-apocalyptic SF, Soledad stands out.

An Ottawa teacher by day, Brandon has been published in On Spec, Daily Science Fiction, PULP Literature, and elsewhere. Check out Sunvault: Stories of Solarpunk and Eco-Speculation on Amazon now, featuring his short story “Pop and the CFT.” Learn more at brandoncrilly.wordpress.com or on Twitter: @B_Crilly