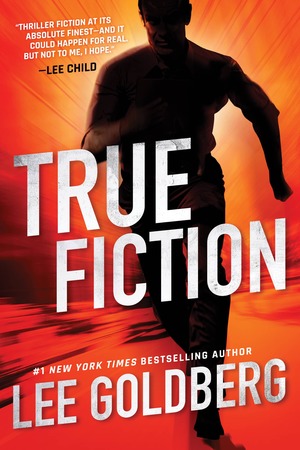 Lee Goldberg broke into writing the old fashioned way — as a journalist. His first articles were for Starlog, Newsweek, and American Film, and he soon graduated to writing scripts for SeaQuest, Diagnosis Murder, She-Wolf of London, and the hit Monk. His writing credits also include 15 books based on Monk, and the bestselling Fox & O’Hare novels co-written with Janet Evanovich.

His latest, True Fiction, strikes out into thriller territory, with the tale of the unluckiest writer alive, bestselling thriller writer Ian Ludlow. (Goldberg’s first novel, .357 Vigilante, was written under the name “Ian Ludlow,” which he admits he chose so he’d “be on the shelf next to Robert Ludlum.”)

When a passenger jet crashes onto the beaches of Waikiki, bestselling thriller writer Ian Ludlow knows the horrific tragedy wasn’t an accident.

Years before, the CIA enlisted Ian to dream up terrorism scenarios to prepare the government for nightmares they couldn’t imagine. Now one of those schemes has come true, and Ian is the only person alive who knows how it was done… and who is behind the plot. That makes him too dangerous to live.

Ian goes on the run, sweeping up an innocent bystander in his plight — Margo French, a dog walker and aspiring singer. They are pursued by assassins and an all-seeing global-intelligence network that won’t stop until Ian and Margo are dead. Ian has written thrillers like this before, but this time he doesn’t know how it’s going to end — or if he will be alive to find out.

True Fiction is the first novel in the Ian Ludlow series. The second, Killer Thriller, arrives in February 2019.

And his Brash Books reissued one of my favorite ‘modern’ hardboiled series’ – Michael Stone’s Streeter books.

Sounds like I’ve found a reviewer for this one!