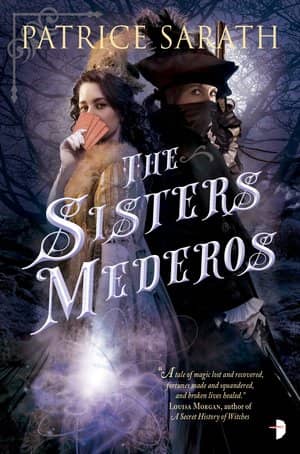 Patrice Sarath’s story “A Prayer for Captain LaHire” appeared in Black Gate 4 and was reprinted in Year’s Best Fantasy 3 (2003). She published the Gordath Wood trilogy (Gordath Wood, Red Gold Bridge, and The Crow God’s Girl) between 2008 – 2012. Her latest is something brand new, the tale of a once-great family that has fallen on hard times, and the two sisters — one who becomes a masked bandit, and another with secret supernatural powers — who set out to reverse their family’s downfall. Publishers Weekly praised it saying,

The young women, newly returned from boarding school to a fantasy version of a preindustrial European port city, are determined to restore their family’s fortune and revenge themselves on the corrupt Merchant’s Guild, whose machinations lie behind House Mederos’s downfall. Yvienne, “the smartest girl in Port Saint Frey,” provokes through newspaper editorials, takes a governess job as an entrée into the houses of the powerful, and eventually discovers the excitement of committing armed robbery. Tesara, who conceals supernatural powers that she blames for the shipwreck that ruined her family, ingratiates herself with the upper classes at gambling tables… [The] heroines are entertaining company, and the dynamic between the two sisters — occasionally contentious, often secretive, always loving — is the most enjoyable part of this effervescent tale.

Two sisters fight with manners, magic, and mayhem to reclaim their family’s name, in this captivating historical fantasy adventure.

House Mederos was once the wealthiest merchant family in Port Saint Frey. Now the family is disgraced, impoverished, and humbled by the powerful Merchants Guild. Daughters Yvienne and Tesara Mederos are determined to uncover who was behind their family’s downfall and get revenge. But Tesara has a secret – could it have been her wild magic that caused the storm that destroyed the family’s merchant fleet? The sisters’ schemes quickly get out of hand – gambling is one thing, but robbing people is another…

Together the sisters must trust each another to keep their secrets and save their family.

The Sisters Mederos will be published by Angry Robot on April 3, 2018. It is 368 pages, priced at $12.99 in trade paperback and $9.99 for the digital edition. The cover is by Paul Young. Read an excerpt at the B&N Sci-Fi & Fantasy Blog, and a brief discussion at Patrice’s website.