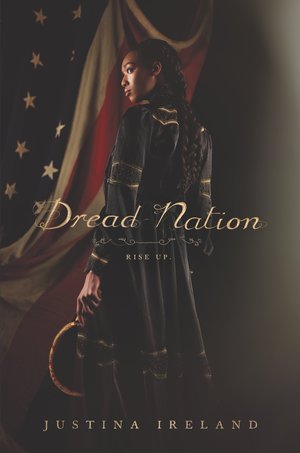 Justina Ireland is author of the YA novels Promise of Shadows and Devil’s Pass. Her latest, Dread Nation, is an audacious fantasy set in a post-Reconstruction America battling a plague of zombies risen from Civil War battlefields, and it’s getting a heck of a lot of pre-release buzz for a zombie book. Booklist calls it “Brilliant and gut-wrenching,” and Publishers Weekly praised its “Abundant action, thoughtful worldbuilding, and a brave, smart, and skillfully drawn cast… [with] a nail-biting conclusion.”

Bustle has a great interview with Ireland in which she says, “Sure, you have well-to-do white women fighting, but it didn’t seem realistic. It would’ve been black women fighting in the streets.” That led her to the intriguing idea of a school for black and Native girls who train to fight the swarms of undead. Dread Nation arrives in hardcover next month.

Jane McKeene was born two days before the dead began to walk the battlefields of Gettysburg, Pennsylvania — derailing the War Between the States and changing the nation forever.

In this new America, safety for all depends on the work of a few, and laws like the Native and Negro Education Act require certain children attend combat schools to learn to put down the dead.

But there are also opportunities — and Jane is studying to become an Attendant, trained in both weaponry and etiquette to protect the well-to-do. It’s a chance for a better life for Negro girls like Jane. After all, not even being the daughter of a wealthy white Southern woman could save her from society’s expectations.

But that’s not a life Jane wants. Almost finished with her education at Miss Preston’s School of Combat in Baltimore, Jane is set on returning to her Kentucky home and doesn’t pay much mind to the politics of the eastern cities, with their talk of returning America to the glory of its days before the dead rose.

But when families around Baltimore County begin to go missing, Jane is caught in the middle of a conspiracy, one that finds her in a desperate fight for her life against some powerful enemies.

And the restless dead, it would seem, are the least of her problems.

First thought: what a beautiful cover.

Second thought: wow, what an imaginative premise! A situation and setup that never would have occurred to me.

Agreed. I’ll be investigating this one as soon as it hit the shelves.