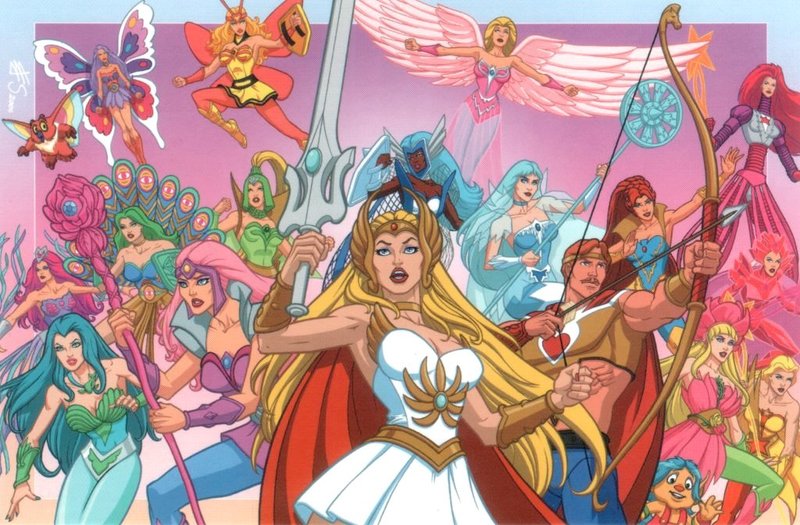 The 1985 cartoon She-Ra: Princess of Power was a spin-off of He Man and the Masters of the Universe aimed at young girls. It ran for 2 seasons, 93 episodes, and was canceled in 1986. Both series were produced by Filmation in conjunction with toymaker Mattel.

WHAT FOLLOWS IS AN OFFSCREEN CONVERSATION FROM A SECRET RECORDING OF SOME OF THE SUPPORTING CAST.

This is a partial transcript of video obtained from the memory files of one of Hordak’s captured Hover Robot spies. It has never been declassified or released on Etheria or Eternia, and we are publishing the audio transcript here at Black Gate at great personal risk, like the brave souls in the movie The Post. You’re welcome, people of planet Earth!

FLUTTERINA: “Well, since we’re dishing gossip, lemme tell you guys — totally off the record — lemme tell you what bothers me about this whole She-Ra charade. I saw her lift a whole lake once.”

FLUTTERINA: “A whole lake. With the bedrock beneath it — like a bowl, ‘cuz you can’t just lift a body of water — and toss it like a mile through the air. A lake. That puts her at what power level? Like a hundred He-Mans? So why doesn’t she just stamp out The Horde?”

KOWL: [flaps his ear-wings and hovers excitedly] “Yeah! Every time she ‘defeats’ Hordak, she just lets him slip away. Sometimes she sees him off with a shake of her finger and a ‘Don’t you ever get up to this sort of mischief again’!”

FLUTTERINA: “It is kind of demented, isn’t it? Like she just likes toying with him, dragging out a cruel game for her own perverse pleasure.” 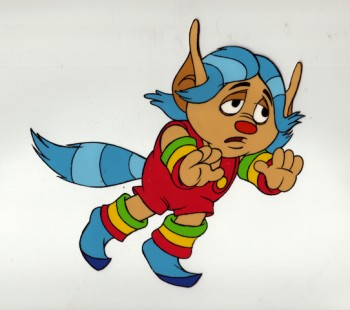 LOO-KEE: [looking existentially shaken] “Or maybe…it’s all a big put-on. A cosmic con. Maybe she’s really coordinating with Hordak, but occasionally chases him off and rescues somebody to give people hope, so they don’t totally go revolutionary and try to overthrow Hordak themselves. She’s like a release valve for the unrest. You know — the peasants think, ‘She-Ra’s on it, fighting the good fight. If she can’t take Hordak out, you know we’d be wasting our time trying to. Leave it to her.’ And they go about their business, and remain oppressed.”

FLUTTERINA: “No, he raises a good point. You know Princess Adora was originally kidnapped from Eternia and mind-controlled by Hordak, right?” 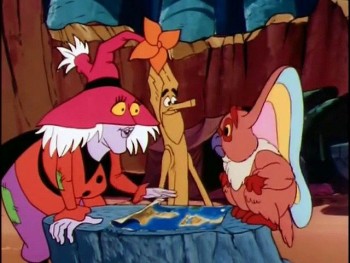 BOW: [The big hunk has been silent until now] “Yeah, but what’s Princess Adora got to do with She-Ra?”

KOWL: “My god, ain’t it obvious? She doesn’t even put on a pair of glasses or something. They’re totally the same person.”

LOO-KEE: “You didn’t know this? You’re kidding me, right? Haven’t you ever noticed that the moment Princess Adora is somewhere and there’s trouble, she conveniently disappears and suddenly She-Ra’s there? And you usually hear someone around the corner yelling about the honor of some chap named Greyskull, and then there’s some firecrackers and a light show? That’s her turning into She-Ra, you doofus!”

BOW: [thoughtfully stroking mustache] “Well, I have…napped…with both of them, but I never…put two and two…”

LOO-KEE: [mutters under his breath] “Well, what do you expect from a guy named after the weapon he shoots.” 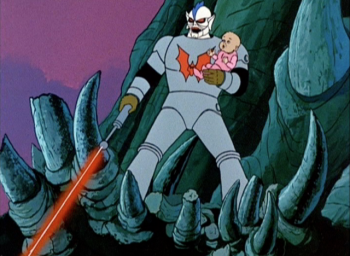 BOW: “But why the secret identity then? Don’t these superhero types usually do that to protect their family and friends from being targeted by their enemies?”

KOWL: “Right. Exactly. Which makes it all the more fishy, see? Who are Princess Adora’s friends and comrades here on Etheria? Us. The same exact friends and comrades as She-Ra! Adora’s the leader of the frickin’ rebellion against Hordak, so we’re already on Hordak’s shit-list. So now we’re associated with not only rebel leader Princess Adora but also She-Ra, so we’re doubly exposed!” 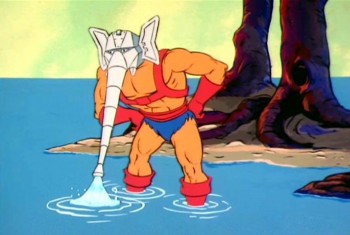 BROOM: “There ain’t a lick of reason for her secret identity, which really makes you wonder, don’t it?”

LOO-KEE: “But she did sell a lot of toys to little girls, right? I think that’s the main thing. The god Mattel from the Film Nation wanted her to do that. Maybe that’s all that matters, anyway.”

FLUTTERINA: “How can you tell?”

KOWL: “Serious? You can smell her from like a mile away.”

LOO-KEE: “Hmmm. Hot today. Well, let’s go find that obscure one-off character Snout Spout and tease ‘im a bit, shall we? See if we can get him to shoot water at us. Oh, hi Perfuma!”

93 episodes in 2 seasons? I’m kind of impressed and horrified, simultaneously.

(And angry that that’s more episodes than the combined full runs of Thundarr, Blackstar and Dungeons & Dragons.)

Yeah, and He-Man (1983-1985) had 130 episodes! Apparently Filmation could really crank ’em out. Guess it helped that a lot of the animation is the same animation used over and over with new dubbing and different backgrounds.

Looking at the runs of some of those ’80s kids cartoons (G.I. Joe had 95 episodes 1983-1986), it’s clear quantity was prized over quality. The reboots of so many ’80s cartoons in the 2000s have such better storylines and character development (and far fewer episodes with much better animation).