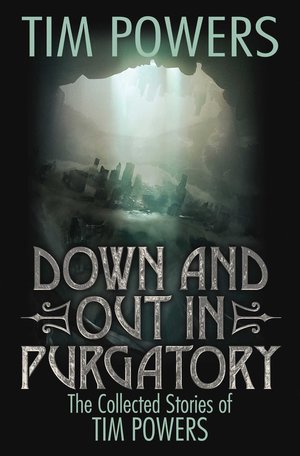 Tim Powers is certainly best known as a novelist. His novels include two World Fantasy Award Winners, Last Call (1992) and Declare (2001), as well as the Philip K. Dick Award winners The Anubis Gates (1983) and Dinner at Deviant’s Palace (1985). He’s also the author of six collections, most published in limited edition hardcovers through William Schafer’s Subterranean Press.

His newest collection, Down and Out in Purgatory: The Collected Stories of Tim Powers, is his first major short fiction retrospective and, at 488 pages, is more than twice the size of any of his previous collections. It contains twenty tales of science fiction and fantasy, including half a dozen previously uncollected novellas and stories originally published as limited edition hardcovers or chapbooks from places like Subterranean Press, Charnel House, Axolotl Press, and others. Most are now priced out of reach of any but the most determined collector, so finally having them in a mass market hardcover is a godsend to Powers fans.

A complete palette of story-telling colors from Powers, including acclaimed tale “The Bible Repairman,” where a psychic handyman who supernaturally eliminates troublesome passages of the Bible for paying clients finds the remains of his own broken soul on the line when tasked with rescuing the kidnapped ghost of a rich man’s daughter. Time travel takes a savage twist in “Salvage and Demolition,” where the chance discovery of a long-lost manuscript throws a down-and-out book collector back in time to 1950s San Francisco where he must prevent an ancient Sumeric inscription from dooming millions in the future. Humor and horror mix in “Sufficient unto the Day,” when a raucous Thanksgiving feast takes a dark turn as the invited ghosts of relatives past accidentally draw soul-stealing demons into the family television set. And obsession and vengeance survive on the other side of death in “Down and Out in Purgatory,” where the soul of a man lusting for revenge attempts to eternally eliminate the killer who murdered the love of his life. Wide-ranging, wonder-inducing, mind-bending — these and other tales make up the complete shorter works of a modern-day master of science fiction and fantasy.

The book contains no less than five hard-to-find novellas, including “Nobody’s Home,” set in the world of The Anubis Gates.

There are also three tales co-written with his frequent collaborator James P. Blaylock, two World Fantasy Award nominees (“The Better Boy” and “Where They Are Hid”), plus a foreword by David Drake, and an intro by Tony Daniel. Here’s the complete list.

Foreword: Paths Through Dark Woods by David Drake
The Powers Effect by Tony Daniel
Salvage and Demolition (Subterranean Press, 2013)
“The Bible Repairman” (The Bible Repairman, 2006)
“Appointment at Sunset” (chapbook, 2014)
“The Better Boy” by Tim Powers and James P. Blaylock (Isaac Asimov’s Science Fiction Magazine, February 1991)
“Pat Moore” (Flights: Extreme Visions of Fantasy, 2004)
“The Way Down the Hill” (The Magazine of Fantasy & Science Fiction, December 1982)
“Itinerary” (999: New Tales of Horror and Suspense, 1999)
“A Journey of Only Two Paces” (LX Eastercon: Souvenir Book, 2009)
“The Hour of Babel” (Subterranean: Tales of Dark Fantasy, 2008)
Where They Are Hid (Charnel House, 1995)
“We Traverse Afar” by Tim Powers and James P. Blaylock (Christmas Forever, 1993)
“Through and Through” (The Devils in the Details, 2003)
“Night Moves” (Axolotl Press chapbook, 1986)
“A Soul in a Bottle” (Subterranean Press chapbook, 2006)
“Parallel Lines” (Stories: All-New Tales, 2010)
“Fifty Cents” by Tim Powers and James P. Blaylock (The Devils in the Details, 2003)
“Nobody’s Home” (Subterranean Press chapbook, 2014)
A Time to Cast Away Stones (Charnel House, 2009)
Down and Out in Purgatory (Subterranean Press, 2016)
“Sufficient Unto the Day” (original)

Future Treasures: Medusa’s Web
The Drawing of the Dark by Fletcher Vredenburgh

Down and Out in Purgatory: The Collected Stories of Tim Powers was published by Baen Books on November 7, 2017. It is 488 pages, priced at $25 in hardcover and $9.99 for the digital version. The cover is by Adam Burn. Read the first few stories online at Baen.com

I am, of course, an obsessive Powers collector. I have many of these stories already, but so what! Another edition never hurt 😉

Plus, must show support!

I’m impressed you have so many of them, Arin!

But you have to admit, this is still a terrific bargain.