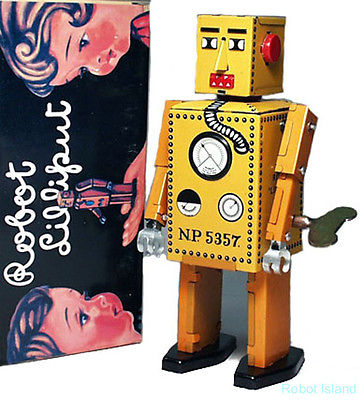 Kids love robots the way they love dinosaurs. Collectors know of thousands of toy robots, especially when the myriad variations of color and design are counted separately. The first of the zillions of robot toys produced in the United States was Robert the Robot, introduced by Ideal for the 1954 Christmas toy season. 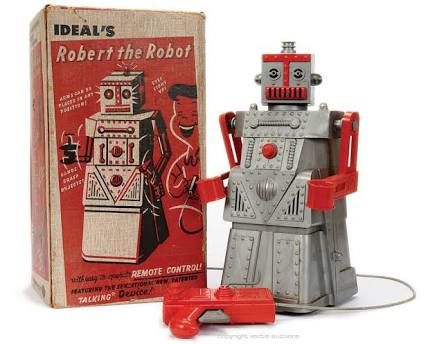 1954 is a quarter century after Buck Rogers. Robots had been ubiquitous in comics strips, comic books, science fiction, radio, television, and  movies since then. Each spawned its own lines of collectibles, associational items, books, and toys. That not a single one featured a robot toy seems impossible. That Westinghouse didn’t think to market toy versions of the Televox, Willie Vocalite, and Elektro robots it promoted incessantly around the country in personal appearances from the late 1920s on is mind-boggling. Westinghouse’s robots were practically full-size toys to begin with.

Yet they never thought of it. Nobody in the U.S. did. Robots, anticipating all good monsters, came from Japan.

The Japanese would get a mostly deserved bad reputation for making cheap imitations of American products after the war, and they certainly churned out knock-offs of Robert the Robot by the boatload. This blithely ignores the deep tradition of Japanese toymaking,  the originality many of their toy lines exhibited, and the sheer number of small firms that competed in the toy market, ever eager for a break through innovation. All one needed was an idea, access to a tin-stamping machine, and a series of benches with patient workers folding along the lines, hammering the tabs into place, and filing the rough edges off.

KT (which might stand for Kuramochi Toys, or might not) sent out a small wind-up robot doll, labeled N.P. 5357 across its lower chest, inside a box marked Robot Lilliput bearing the likenesses of two rosy-cheeked Caucasian tots staring at the wonder. Collectors argue heatedly whether Lilliput is prewar or postwar, although the one in Nuremberg Toy Museum (Das Spielzeug Museum) has an Advance Sample tag with the date of 2/7/37 attached to it. The KT trademark is also found only on pre-war toys. Yet a CK trademark accompanies it and that is a distributor solely found on post-war toys. No records exist that serve to pinpoint the Lilliput to any specific manufacturer. A leveling of one’s country in total war will see to that. Therefore none of the other logical questions can be answered. Why Lilliput? Why N.P. 5357? Why a robot?

The best thing about the Lilliput, other than being the only robot toy in the world!, is that is moved. A large key inserted in its side wound up the mechanism. 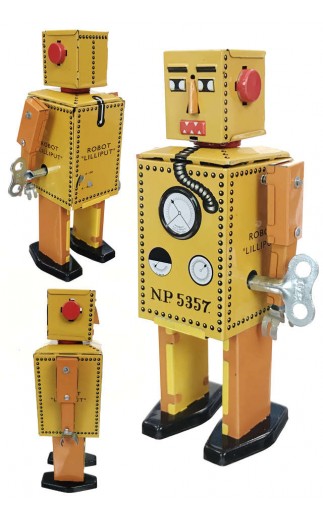 When a little switch on the back is slid to the “on” position, Lilliput shuffles forward a few inches because of pins in its feet. Only a very imaginative child could picture Lilliput as a menace, although aiming one at a stack of blocks might knock them over with a satisfying crash. Well, a rickety stack of blocks. Maybe a stack of dominos.

The remaining Lilliputs are so scarce that it seems likely that no major firm in the U.S. ever picked them up. Collectors, nevertheless, have examined them with the thoroughness of a scientist approaching a moon rock.  The original is yellow tin, with features lithographed on. It stands 6” (15 cm) tall and has a chest 1¾ in. (4.5 cm) wide. The soles of the feet are painted black. There are eight tabs between the legs.  And on and on. Cheap knockoffs, now coming from out of China, are easily available online, in a variety of sizes and colors and trademarks. Many of them call themselves “original” Lilliputs, which means only that they copy the original more closely than some of the variants. Collectors cannot afford to make a mistake. True originals would probably run you over $10,000 assuming any appear at an auction. The original original, that is. A version 2, made with a simpler and therefore cheaper production technique, also exists, known in a deeper orange color.

In 2006, Stefan Czernecki, a children’s book writer and collector of robot toys, combined his passions into Lilliput 5357. 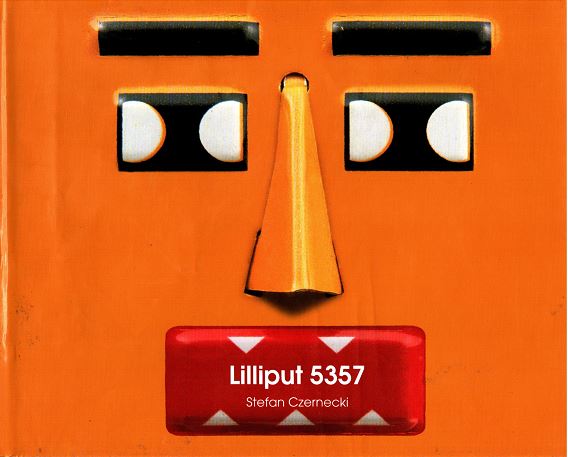 Lilliput gets chased off his playground by some big bad, robots, climbs into his Rocket Racer, and flies off to other robot lands until he finds robot paradise.

Every page is a photographic feast of parti-colored robot toys, some familiar, some incredibly rare. I think it’s more a book for adults than for kids, but try it on a susceptible youth and see where it leads.

The next robot toy to be produced was indisputably post-war, its name a giveaway: Atomic Robot Man. A metallic gray replica of Lilliput except for the flat head with a tin helmet , the robot debuted in 1949 and almost immediately headed for its natural home. A handful were given out at the 1950 New York Science Fiction Conference. Three are known with that stamp on its back. You can’t afford those either.

Then Robert appeared. Armies of robots occupied every nerdy household in America. They never left. They got bigger and better and remote controllable and started talking and transforming. Little Lilliput does nothing but be cute. I bought myself one. I mean of course a cheap knockoff. I don’t pay $10,000 for cute.

Steve Carper writes for The Digest Enthusiast; his story “Pity the Poor Dybbuk” appeared in Black Gate 2. His website is flyingcarsandfoodpills.com. His last article for us was London Wins Great Game.

Wonderful post! I know I have a knockoff Atomic Robot Man around here someplace. Artist Brad Foster is a huge robot fan too. He even went so far as to create his “Your Inner Robot” portrait series, which he draw for customers at art fairs.