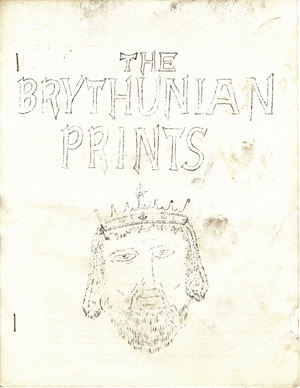 Among the couple of boxes of fanzines I picked up a few weeks ago was this oddity.

It’s the first (and I suspect only) issue of The Brythunian Prints, dated June 1967. I’ve not been able to find out any information at all on this title. It was a sword and sorcery fanzine, “published by the Brythunian Troop of the Hyborean Legion.”

The editors (Ken Hulme, Jim Feerhmeyer and Greg Shank) dedicate the issue “to L. Sprague de Camp and George Scithers for their kindness and cooperation!” Based on Shank’s editorial, they were apparently students at Toledo University, where they formed an organization called the Northwest Ohio Science Fiction Society.

The fanzine is 16 pages long, five pages of which are a S&S story, “Shandu the Magnificent” by Tom Trotter and Ken Hulme. It’s just as good as you would expect it to be. ?

The most interesting content is two pages of poetry by Lin Carter, under the general heading “War Songs and Battle Cries,” apparently reprinted with Carter’s permission from The Wizard of Lemuria and Thongor of Lemuria. The remaining content is taken up with editorials, limericks by John Boardman (four of which were reprinted from Amra) and a book review of The Fantastic Swordsmen edited by de Camp. The back cover is Tolkien related, as it pictures “Baggins and Trinket” (the Ring).

I’d be curious to know if anyone has any further info on this one.

Doug’s last post for us was The Fellowship of the Ring and the Palantir.

[…] HYPERBOREAN AGE. Black Gate’s Doug Ellis says it’s “Time to Revise Your Lin Carter Biography”, though “bibliography” may be the intended word. Either way — Ellis tells about a 1967 […]

Just a brief comment: My understanding is that there are literally hundreds (perhaps thousands) of fanzines that have existed over the years. Finding any particular one, or information about it, is I believe like finding a needle in haystack.

But, with the internet, who knows? You might get lucky.

Man, it’s fun to come across finds like this! Some of these are probably of more interest now than they would have been at the time.