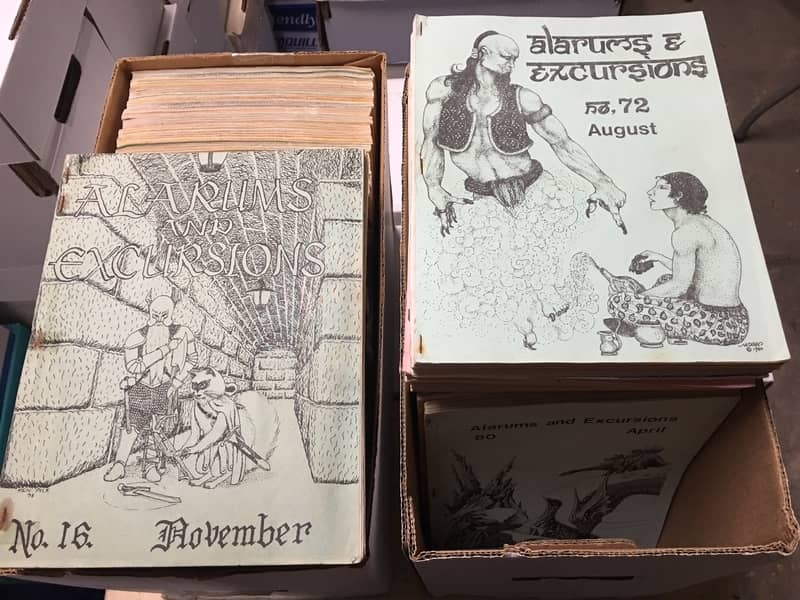 I picked up a collection of SF/fantasy books, magazines and fanzines this past Saturday (December 16), including a bunch of 1970’s-1980’s fantasy roleplaying material. A lot of the RPG stuff was D&D related and was a trip down memory lane. That was particularly true of one of the items.

Back in December 1979, eight of us were packed into a van driving from Buffalo to Apopka, FL (near Orlando) to spend the winter break with my grandparents, who wintered down there. Besides my parents and my sister, my cousins Scott and Jeff were with us, as well as my aunt and uncle. At the time, I was 16, Scott was 17 and Jeff was 12, and we were all completely hooked on D&D, as well as other fantasy games, such as Metagaming’s Melee and Wizard. I suspect our focused and energetic conversations during the 48 hours we spent in the van (round trip) drove the rest of the folks trapped in the van a bit nuts.

While in Orlando, we talked my dad into driving us to a gaming store. There we found three issues of a magazine we’d never heard of before, which I bought immediately — Alarums and Excursions, which was a gaming APA. None of us had any clue what an APA was before coming across these. I remember our reading them on the drive back to Buffalo. One of them was issue #51, and I still have those issues.

In flipping through the gaming material I picked up this past Saturday, I was surprised to find a copy of issue #51 staring back at me, and it brought back the memories of that trip from nearly 40 years ago. In all, there were 73 issues of Alarums and Excursions in the material, ranging from issue #16 to issue #134. Above is a shot of the boxes with them, and below are scans of the covers from a few issues. There was also one issue of another gaming APA, The Wild Hunt, in the mix. It’ll be fun leafing through them! 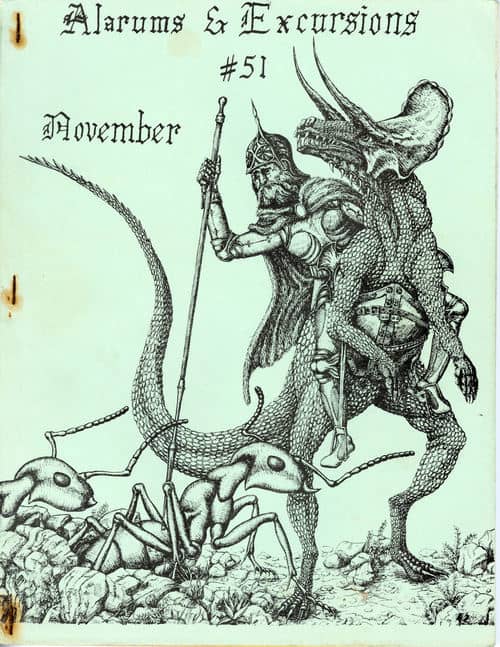 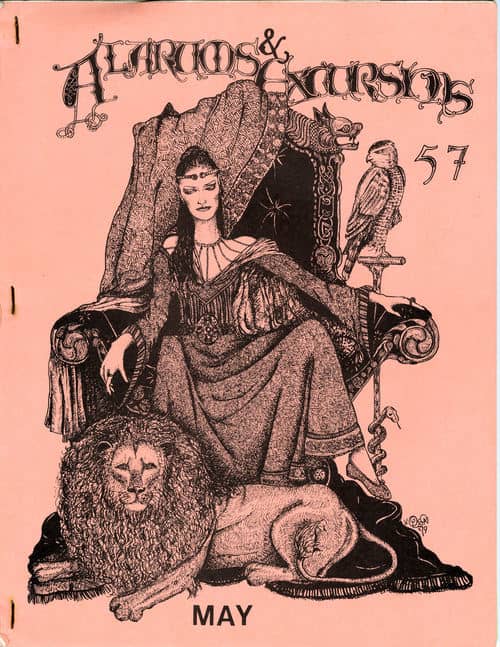 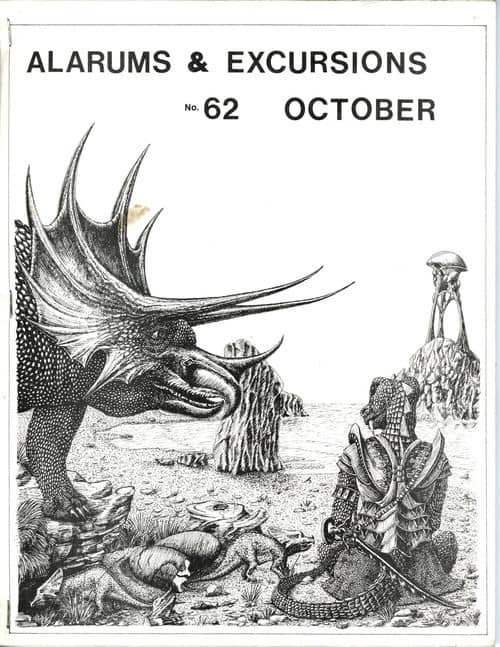 Doug is a collector of pulps, as well as of pulp, science fiction and fantasy art. He co-founded and co-organizes the Windy City Pulp and Paper Convention. For many years his Tattered Pages Press published the pulp fanzine Pulp Vault, as well as other books on the pulps. He was one of the authors of The Adventure House Guide to Pulps, and has edited several pulp anthologies, including the Best of Adventure series. His book, Uncovered: The Hidden Art Of The Girlie Pulps, an in-depth study of the spicy pulps and their art, was named ForeWord Magazine‘s 2003 Popular Culture Book of the Year. In 2013, Bob Weinberg, Bob Garcia and he collaborated on The Collectors’ Book of Virgil Finlay, a collection of Finlay’s gorgeous art. His last post for us My All-Story Story, or, A Tale of Tarzan (Not Triumphant).

Nice haul there Doug! I think some of these old APA’s are becoming quite collectible. Just looking at the likes of eBay items such as Tales of the Reaching Moon and Amra are commanding decent prices. Interestingly a friend of mine, Peter Maranci used to contribute to The Wild Hunt. Some of his contributions are digitised here: https://www.maranci.net/r&r.htm

I consider myself an old school gamer, but what’s an APA?

It stands for Amateur Press Association. Several folks publish their own short fanzine, and send them to an editor who assembles them and mails them to all contributors.

Thanks for the comment, Tony. There actually was one issue of The Wild Hunt in the stuff I just picked up, as well as a few other gaming fanzines. Glad to hear they’re going for good prices these days, as I’ll probably end up selling these.

I stumbled across it in the early 1980s in my FLGS and could not figure out what it was. I ran into a flyer for it at a gaming convention in the early 1990s and started to subscribe and even contribute for almost a decade. If you think of it as a shared blog site (where most of the notorious acronyms like “IMHO” and emoticons like “:)” where originally invented), you will get the gist of it.

Blast from the past! As a wide-eyed kid in the early 80s, I contributed my own zine to A&E. It was called “Fighters, Mages, and Sages” and ran for, I seem to recall, seven issues. I think I started on issue 100 or 102 or thereabouts. I can’t for the life of me remember much of what I wrote. Sad to say, all those old issues were lost in a move.

I think I started on issue 7or 8 and was a regular up to around 20. And we were all barely out of our teens back then, so most of what we wrote wasn’t anything to brag about.

That was back in the mid-to-late Seventies, and most of the action in A&E was a slow-motion flamewar between Glenn Blacow of Massachusetts and most of the DMs and gamers on the West Coast over power levels in a campaign. Yes. a flamewar. The pace was much slower back then with the two-month turnaround, but the flaming was just as hot as on a chatroom today.

Found this at random and recognized A&E #16 by its cover.

I’m the guy who drew that cover way back when; it’s a scene from one of the most memorable runs in Gregg Howard’s Courts of the Crimson King, early 1976 when he premiered the wilderness around his Dungeon called Crimson. That would have beenheld on a Friday all-nighter at Pitzer College in Claremont. The cover was done with a crow-quill dip pen; I was a lot better with that medium then than I am now.

During 1976 & 77, I had a zine in the APA titled “News from Nexus”; my regular DM Wayne Shaw had one called “Portal to Temporalana”. My stuff was nothing to brag about; we were all barely out of our teens and wish we knew then what we knew now.

That was the Burgess Shale Period of gaming; all we had were “three little books plus Greyhawk”, i.e. Gygax’s scribble notes, no offiical backgrounds, no official universes, no published scenarios. Every DM had to homebrew his own house rules and dungeon, resulting in a wild & crazy variety unknown before or since. I know Wayne indirectly introduced me to Lovecraft & Moorcock; most of me F&SF reading during that period was to stay one jump ahead of what he was putting in his dungeon.

These days I’m still a regular contributor to the online gamezine Freelance Traveller, but I still keep an eye out for Old School D&D action.