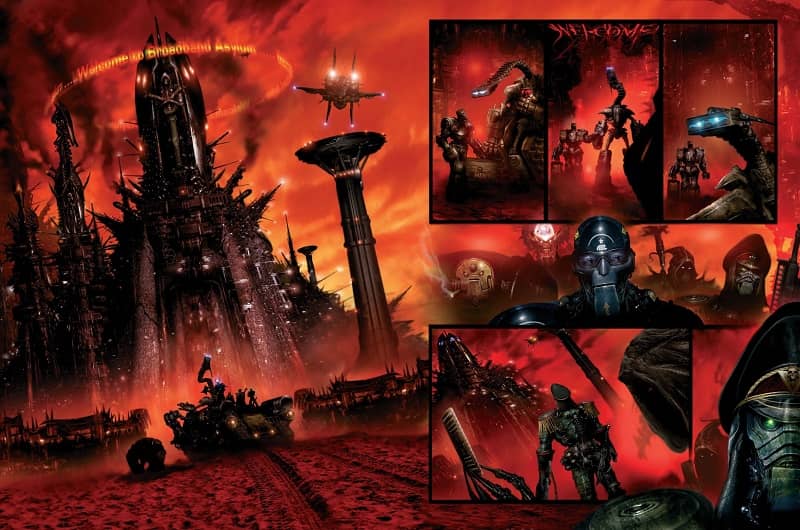 I’ve been reading 2000AD for a bit now, and listening to the 2000AD podcast by the Molcher-Droid, so I’ve heard a lot about The ABC Warriors, but didn’t know anything about them. In fact, from the name alone, my first thought was that canned pasta Alphaghettis that my mother used to have in the pantry for when she was working and we had to make our own lunch. Little could I have guessed that ABC stands for the Atomic, Biological and Chemical parts of warfare, and the robots who fight in those kinds of wars.

As one of the comics bloggers for Black Gate, I recently got my hands on an advanced pdf of the fourth volume of The ABC Warriors. For clarity and disclosure, the publisher 2000AD is owned by the same horse-riding video game designers who own Solaris Books (my publisher), but I don’t get any bonuses or consideration if I review their comics. I just like comic books (as you can tell from my post history). So, I wouldn’t have reviewed this if I didn’t actually like it.

And I did like it. In fact, given my Spaghetti-O imaginings, my expectations were blown out of the water. Right out of the gate, I couldn’t believe the mixed paint and digital art by Clint Langley. The first look at Broadband Asylum under the red light of Mars is breathtaking. This reaction to the art went on and on as I read the whole trade. I love comics with painted art.

The only place I was pulled out of the beauty was with the photographs of actors used for the humans. It’s not that it’s bad. It’s striking and unusual compared to my reading habits, and for that reason, the humans occasionally drew my attention away from the story, as I started to consider how different human faces are from the stylized emotive shortcuts we’ve been using in comic books and strips for a century. 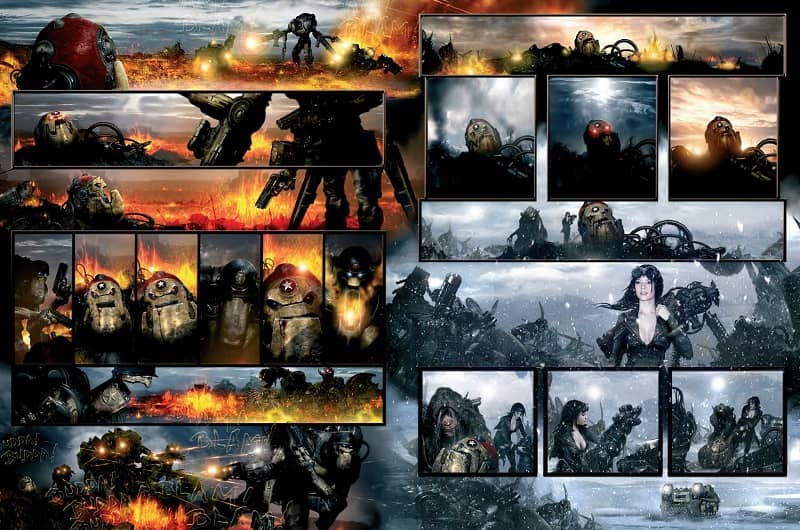 On the writing side, Pat Mills did a great job in making the seven or eight main characters seem multi-dimensional. The story is structured slightly after The Cantebury Tales, in that each of the main characters tells their story as robot combat veterans of the Volgan War.

Hammerstein was a sergeant in the Volgan war and had to deal with how humans used robots, even sentient robots, to fight their wars, with some pathos and tragedy painted across the page. This was also my introduction to the mysterious special ops robot called Zippo (pun intended by Mills). 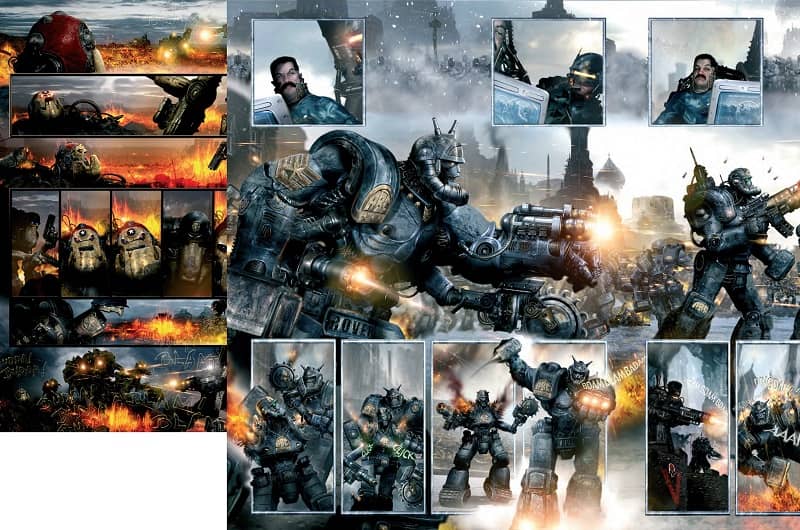 Mongrol was a paratrooper droid smashed to bits and put back together by a human resistance fighter. The intersection of his story with that human, who also crosses the story of the reprogrammed ex-Volgan robot Blackblood, was a lot of fun, especially getting to see it from three (if not four) sides.

Joe Pineapples meets up with Zippo as well, as he takes on a pretty demanding sniper mission and Blackblood narrates the story of his reprogramming from Volgan soldier to ABC fighter, even though he’s not very loyal in any capacity. 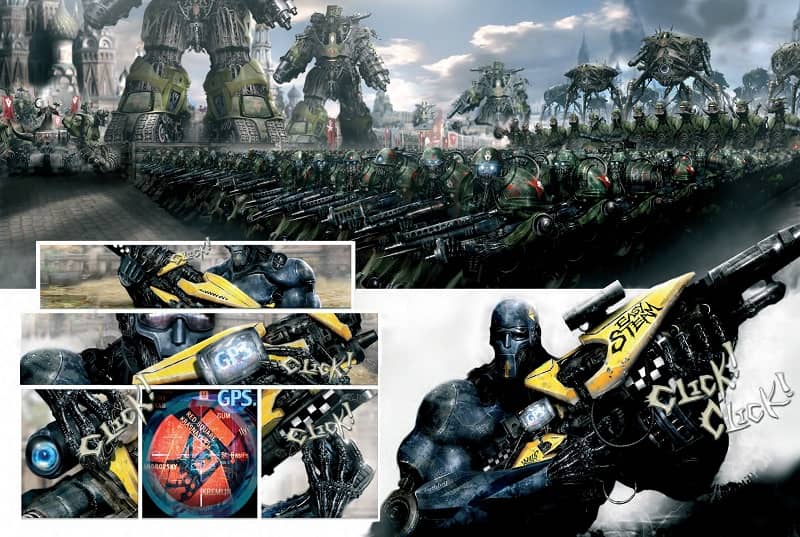 And probably my favourite robot was Deadlock, a kind of philosopher-mystic robot, a kind of Platonic Templar grand-master made out of bolts and engine grease and weapons. I always love religion mixed in with my science fiction and fantasy. 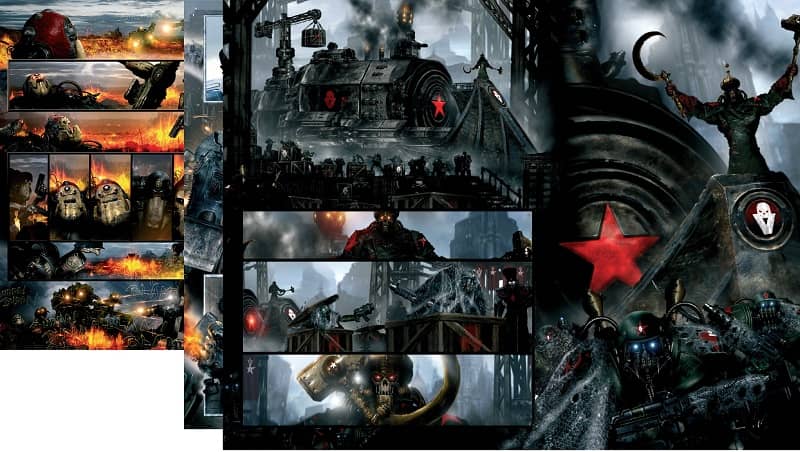 The big bad on the Volgon side of the war is Volkhan, a kind of Russian Khan of robots, with an onion-dome head and a sickle and hammer, which he uses on his own robots as much on enemies. I loved the way Mills had him relevant and determinative in the pasts of all the ABC warriors, and also very much a piece of the present, long after the Volgon wars ended. 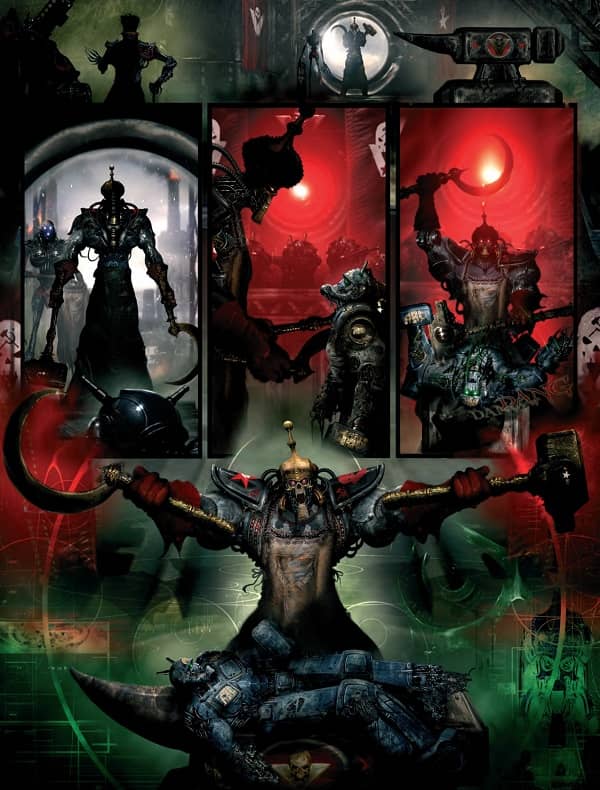 ABC Warriors is definitely military SF, with all the cigar-chomping, officer-doubting, buddy-dying tropes of the form, as well as new looks at the ways humanity and robots will judge each other in the practice of one of the oldest of professions. I enjoyed this trade and will look up the first three. ABC Warriors: The Mek Files 04 is on sale in March, 2018.

Derek Künsken writes science fiction and fantasy in Gatineau, Québec. His first novel, The Quantum Magician, is being serialized right now in Analog Magazine, and will be out in book form from Solaris in October, 2018. He tweets from @derekkunsken and has trouble updating his website.

ANC warriors has been a staple at 2000AD for decades. It has been interesting to watch them develop from their Ro-Buster days. There have also been many crossovers, especially with Nemesis. One of the things one has to wrap their head around is that these robots are pretty much immortal, so their storyline can be confusing at times as it bounces back and forth over the ages. Glad to see they are still going strong!

I love the ABC warriors series.

I actually jumped on when they started the “Black Hole” series in the US reprint crudely colorized under the “Quality Comics” logo as a backup to Rogue Trooper. I hadn’t heard of Nemesis the Warlock or anything since then so the far future robot story was really amazing. Deadlock was my favorite also.

It is neat how they deal with intelligent Robots and how such beings would have immortality. In principal I don’t like “Retcons” due to the US film industry abuse of it but things like this are an exception.

Also Mills work is brilliant. Both as a good artist and “Whatever works” to tell the story.

Grew up with these guys (along with Dredd, SD, Harlem Heroes and the rest – was lucky enough once to meet Martin Bowers, an SFX model maker (Alien, Outland) who showed me his models of Hammerstein and Ro-Jaws. Glad you are enjoying these later tales!