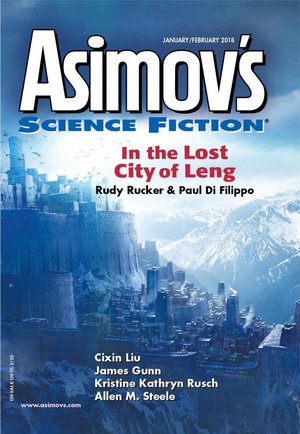 Asimov’s SF wrapped up its 40th Anniversary year on a high note last issue, and soldiers on fearlessly into its 41st year with the January/February 2018 issue.

This one features two big novellas: a classic lost-city tale of the 1930s from Rudy Rucker and Paul Di Fillipp, “In the Lost City of Leng,” and a far-future adventure in Kristine Kathryn Rusch’s Diving Universe, “The Rescue of the Renegat.” Plus new stories by Cixin Liu, Matthew Hughes, Allen M. Steele, James Gunn, and much more. It’s on sale now at finer newstands.

Our forty-first year sweeps in with the January/February 2018 issue! Two action-packed novellas feature in this exciting installment. Rudy Rucker and Paul Di Filippo take us back to the 1930s and the days of exploration for a thrilling adventure “In the Lost City of Leng.” Hugo Award-winner Kristine Kathryn Rusch rockets us forward in time for her breathtaking account of “The Rescue of the Renegat.” These tales will keep you on the edge of your seat throughout as you wonder who will survive till the curtain falls.

Multiple Hugo Award-winner Allen M. Steele escorts us once again to the planet Coyote for a dangerous journey to “The Barren Isle”; while we know the world may end in fire or ice, Hugo Award-winner Cixin Liu’s first tale for Asimov’s reveals just how perilous the pursuit of art can be in “The Sea of Dreams”; Mathew Hughes returns after too long an absence to expose us to some “Solicited Discordance”; the distinguished James Gunn continues his tales about pilgrims in “The Seeds of Consciousness: 4107’s Story” and “The Final Commandment: Trey’s Story”; new author S. Qiouyi Lu examines the stark choices facing a single parent and the sacrifices that may be made in “Mother Tongues”; Robert R. Chase brings us another thriller with “Assassins in the Clouds”; and Ian Creasey looks at the effect “The Equalizer” will have on tomorrow’s society.

Robert Silverberg’s Reflections on walls continues in “Gog and Magog II”; James Patrick Kelly’s On the Net advises that we “Don’t Read the Comments”; James Gunn brings us a Thought Experiment on “Space Opera and the Quest for Transcendence”; Paul Di Filippo’s On Books reviews works by Daryl Gregory, Jacqueline Carey, Cat Sparks, Neil Clarke, and others; plus we’ll have an array of poetry and other features you’re sure to enjoy.

The introductory blurb to “In the Lost City of Leng” refers to Lovecraft’s “At the Mountains of Madness” as “perhaps the greatest SF tale of all time.” Interestingly, you can buy a canvas print by Rudy Rucker depicting some of the decidedly Cthulhuesque goings-on the story. Here’s a sneak peek. 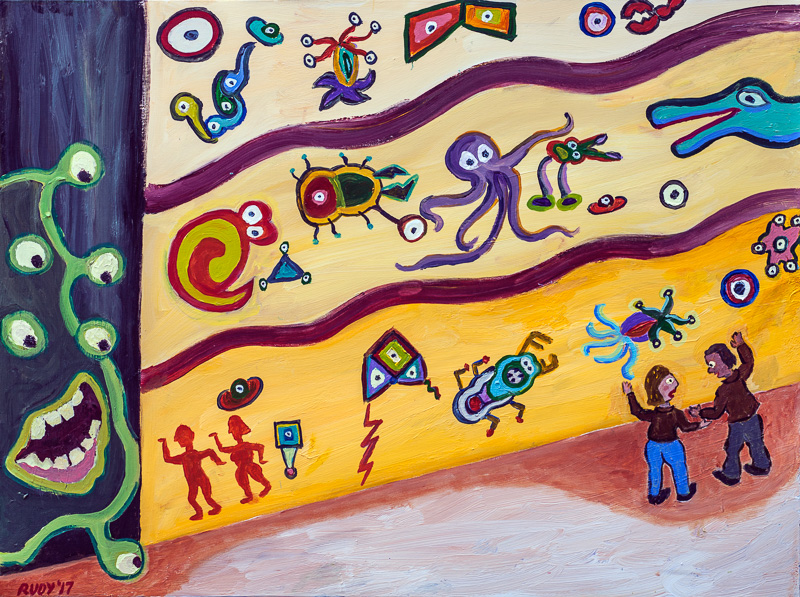 Purchase copies of the print at Imagekind.

In her editorial, “A Few Words About Some Words,” Sheila reports on what happened when Neil Clarke did a search of 50,000 recent submissions to determine the most popular story titles submitted to Asimov’s. The results are pretty illuminating. Check them out here (Asimov’s rotates content off their site with each new issue, so after about mid-February this link will take you to the current editorial.)

Here’s the complete Table of Contents for the January/February issue.

Editorial: A Few Words About Some Words by Sheila Williams
Reflections: Gog and Magog II by Robert Silverberg
On the Net: Don’t Read the Comments by James Patrick Kelly
Thought Experiment: Space Opera and the Quest for Transcendence by James Gunn
On Books by Paul Di Filippo
Next Issue
Thirty-Second Annual Readers’ Award
2017 Index
The SF Conventional Calendar by Erwin S. Strauss

I don’t know who painted the excellent cover, and the website won’t tell me, but when my physical copy arrives I’ll let you know (Update: it’s by Eldar Zakirov.)

The issue went on sale December 19. It will be on sale until February 20.

We last covered Asimov’s SF with the January/February 2018 issue.

Our December Fantasy Magazine Rack is here. See all of our recent fantasy magazine coverage here.