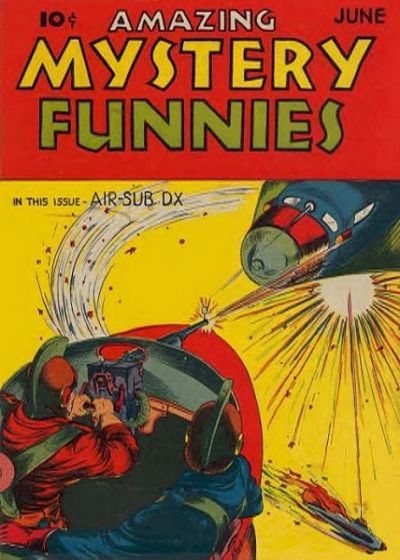 Twenty-two-year-old artist Carl Burgos entered comics in 1938. He almost immediately started creating  his own features as artist/writer, achieving immortality in the field when an android bizarrely named the Human Torch burst into flames in the legendary Marvel Comics #1 (October 1939), the same issue that introduced Bill Everett’s Sub-Mariner. The Torch’s name got passed on to Johnny Storm when The Fantastic Four debuted and the original received one of the weirdest revivals in comics’ history as the Vision in Avengers #57 (October 1968). (No relation to a 1940s character called the Vision.) The Avengers’ brainier members quickly traced his heritage to that android created by scientist Phineas Horton in 1939, conveniently forgetting that Burgos himself stopped calling him an android after about three issues. For the next decade, the Human Torch seemed to be a regular human whose body was fire, or could be set on fire, or contained fire, or something else equally unclear. The Golden Age lacked continuity police.

Probably only a few comics historians understand how obsessed Burgos was with artificial people. Just before the Human Torch he created a cyborg or robot named Iron Skull whose origin story changed every couple of issues and a few months later he produced an unquestioned android, Manowar the White Streak. Despite the name, Manowar was a utopian who fought evil in the cause of peace. (And wasn’t white. And not the same as Paul Gustavson’s contemporary Man of War for the same company. Writing comics history is footnotes all the way down.)

Comic books were so new in 1939 that, like Leacock’s Lord Ronald, they rode madly off in all directions. Superman, the the sensation of 1938, spawned more of what we now call superheroes but they didn’t dominate. The 64-page comic books had already made a swift transition from reprinting newspaper comic strips, with 30 or more titles inside a single book, to all-new titles containing eight stories (seven pages each to account for ads and filler material) and eight different heroes. How they decided which contributed to sales is anyone’s guess, although letters from kids surely guided them, but tables of contents changed virtually every issue.

Centaur Comics had the usual tangled publication history of firms in that era, although it traces back to one of the ur-comic books, 1936’s self-explanatory The Comics Magazine, a mixture of black and white and crudely colored reprints that added Funny Pages in large letters on its cover from the second issue on as if to claim the entire field as its own. It didn’t last long, regardless. Various detective and western titles (Star Ranger was not science fiction) followed before another change in ownership ditched the niche books for Amazing Mystery Funnies (August 1938). Its first cover featured Bill Everett’s “Skyrocket” Steele. Everything you need to know about 30s comic books is encapsulated in one fact: the editors forgot to put a “Skyrocket Steele” story inside the issue. So Amazing Mystery Funnies #2 had to put a box on the cover:

In This Issue
“Skyrocket” STEELE
In Complete Pictures

I suppose if any company could produce a book with incomplete pictures it would be Centaur. (Another character introduced in that issue was named Speed Rush, who I’m guessing was an inside joke.) Anyway, “Skyrocket” Steele was a ninth-rate Buck Rogers imitator having adventures in “the year ‘x’ (about 2500 A.D.)”, therefore nominally science-fiction. By the way, the story was not complete but ended in a “to be continued.”

A note from “Uncle Joe” in the third issue (September 1938) indicates that readers responded favorably to Steele, so the very next page introduces Burgos’ Air-Sub “DX”. The story starts in the middle with Professor Gray, Tim, and Rita flying over the country of Tago-Lor, ruled over by Curley. Curley has a squadron of “tank planes” but he wants Gray’s DX captured “in tact” so he can study it. Surprise. The delta-winged air ship can dive into the Tago Sea and disappear. Yet that puts them in danger from Curley’s “crab subs,” over which they prevail with a red lightning ray from their dissolving gun. That only makes Curley want the air-sub all the more because with it he can become “emperor of the whole universe.” Burgos packs far more action into these tales, set on an unspecified world in an unspecified future, than Everett ever manages. Air-Sub “DX” nevertheless remained a minor back-up though it rated the cover once, on Amazing Mystery Funnies #10 (June 1939), cover artist Bill Everett giving the ship a better space battle than Burgos ever could (above).

Issue 12 (August 1939) has the adventure that captured me, featuring a robot so gigantic it cradles the DX  in its arms like a squirming puppy and walks through the ocean as if the water merely tickles its toes. While skyscraper-sized robots littered the pages of comics in 1939 and 1940, Burgos makes his a truly worthy foe.

Air-Sub “DX” lasted only one more issue, made pop-up appearances in Amazing Mystery Adventures #1 (June 1940) and Fantoman #2 (August 1940), and then went into the oblivion of comics history. Centaur itself was running on fumes by that point – maybe even earlier judging by the money-saving b&w art, although successors pushed on until the war hit. Burgos stayed active as a comic creator through the 1950s and returned to the field several times as an editor. To be honest, other than the Human Torch I’ve never heard of any other characters he created. I’d still take his art over anybody else’s in Amazing Mystery Funnies. It has all the cinematic qualities that people rave about when talking about Jack Kirby as well as good composition and lots of movement. No robot of the era burst off the page better than this one does on page two. If Air-Sub “DX” isn’t exactly a lost classic, it’s a worthy of a belated second glance. 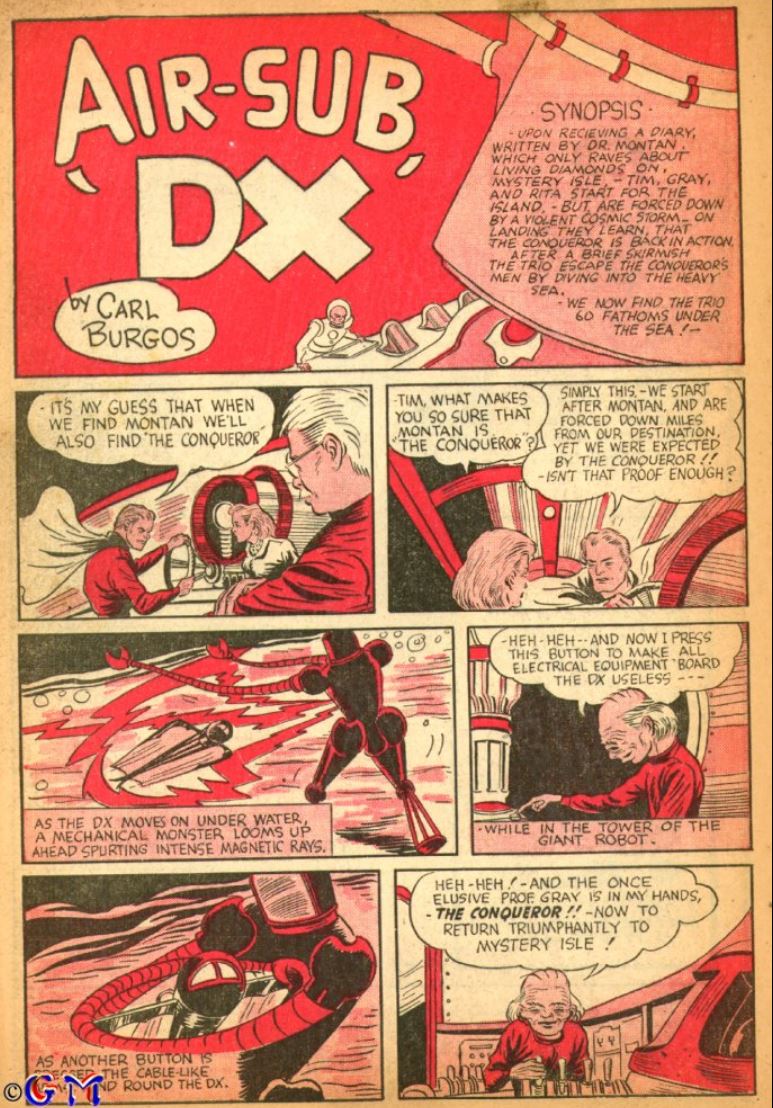 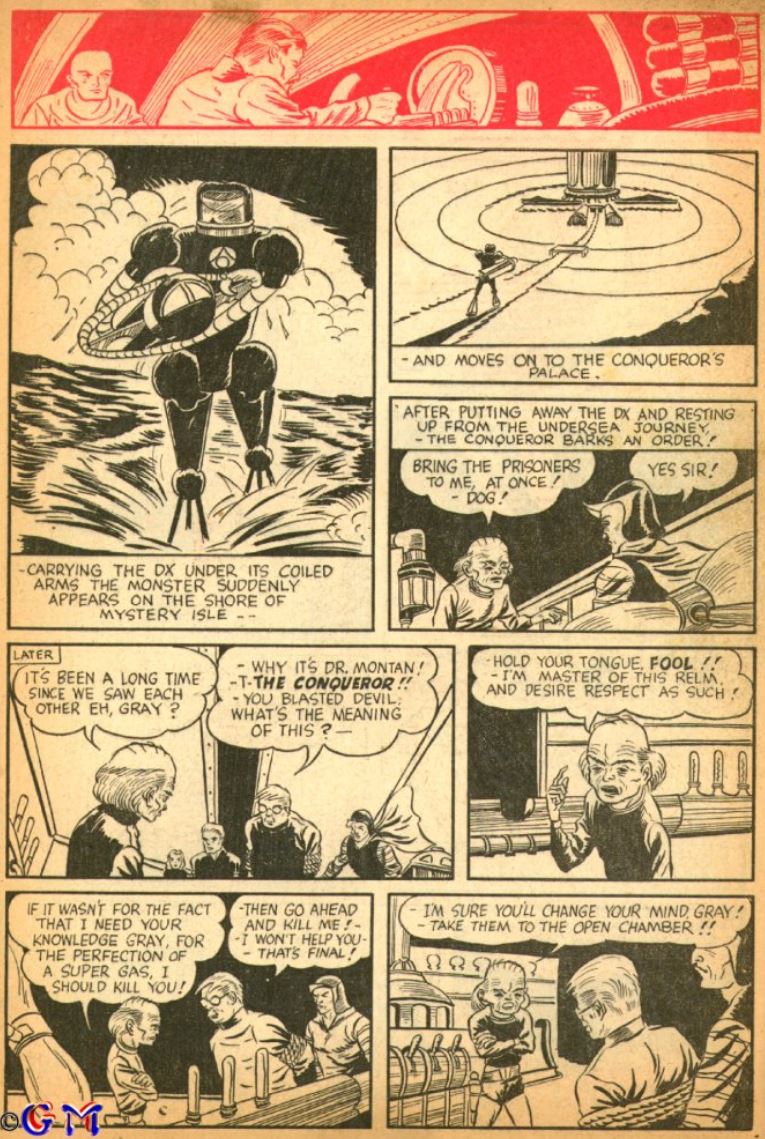 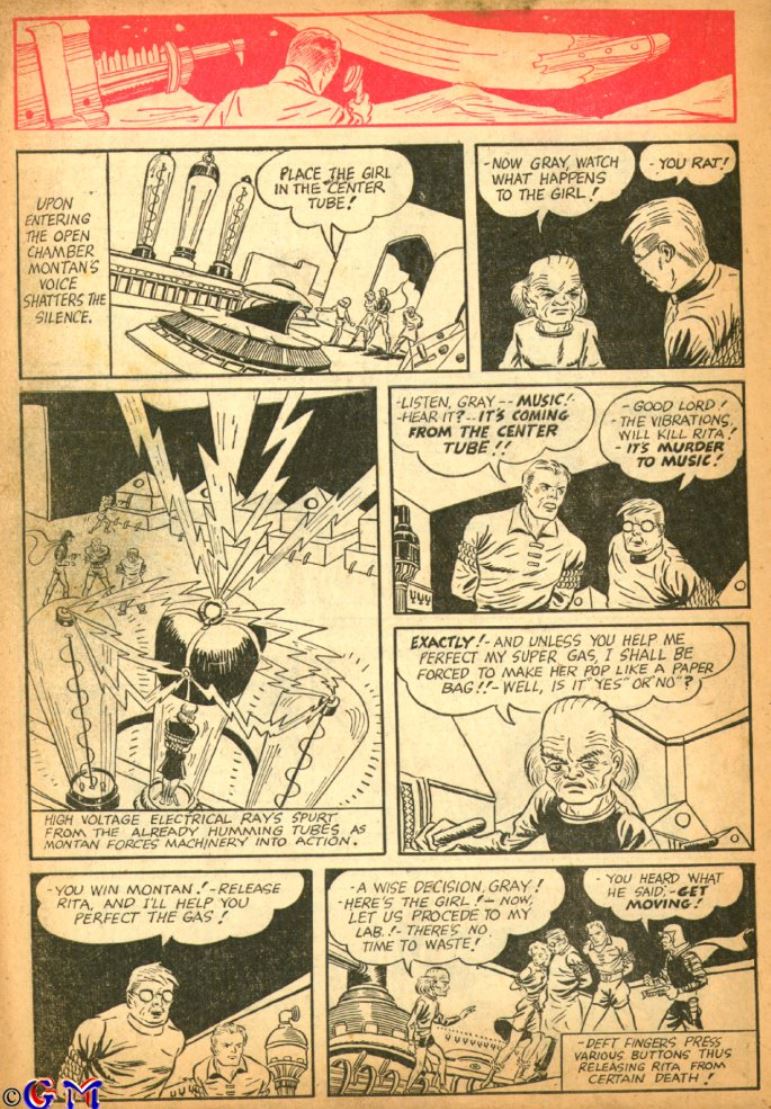 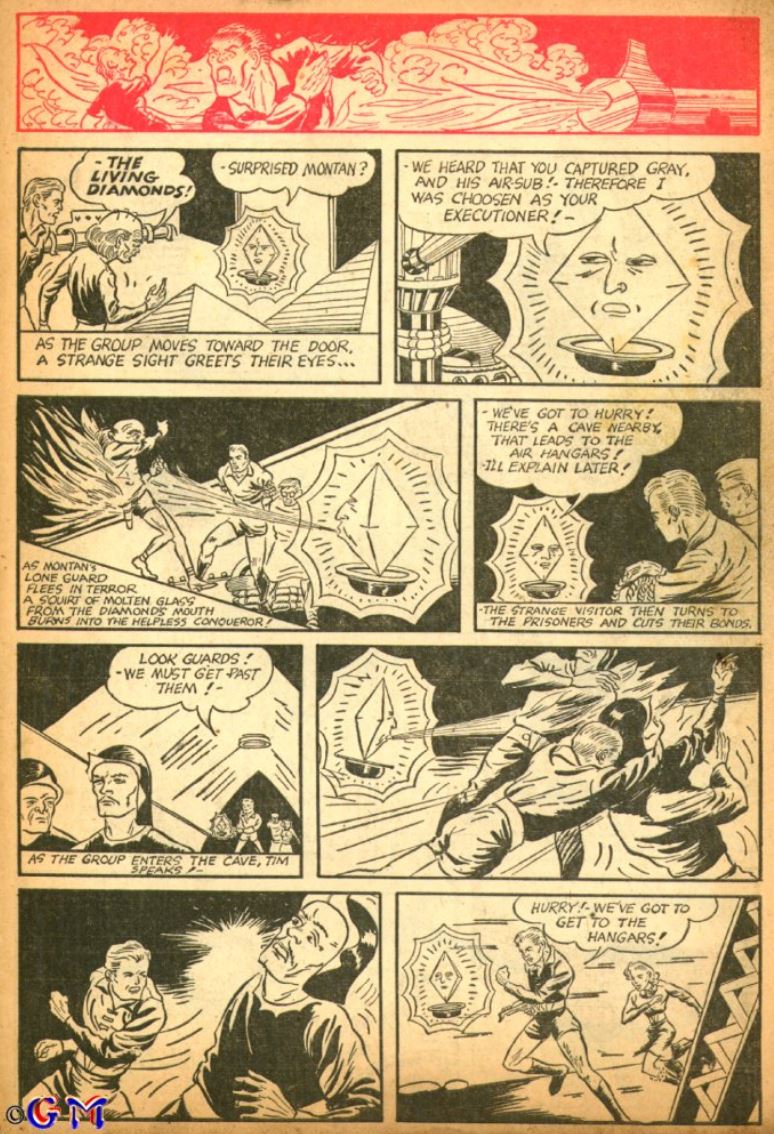 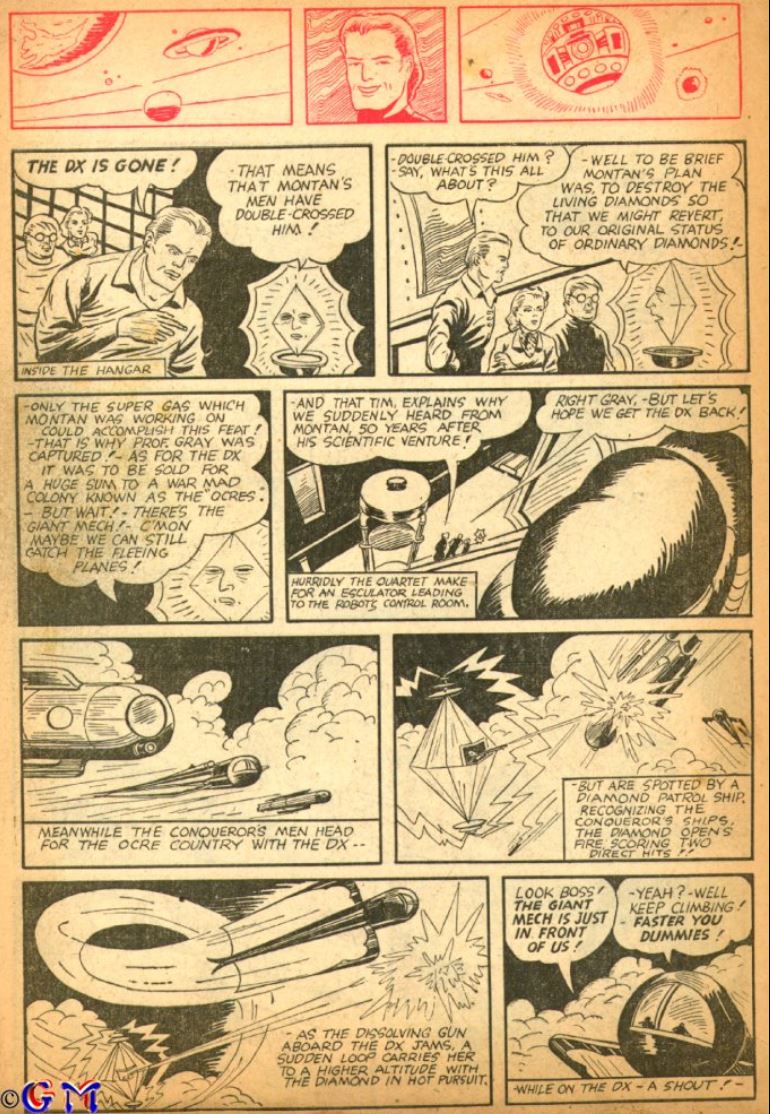 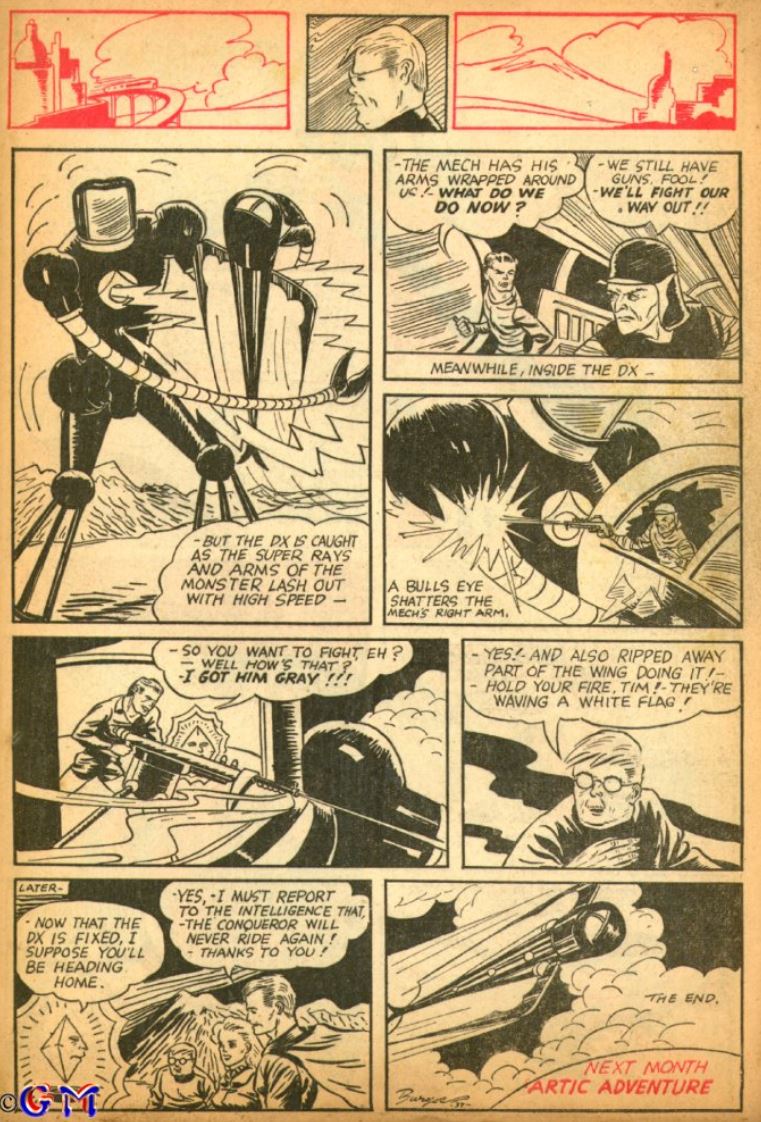 Steve Carper writes for Digest Enthusiast; his story “Pity the Poor Dybbuk” appeared in Black Gate 2. His website is flyingcarsandfoodpills.com. His last article for us was Little Miss Martian.