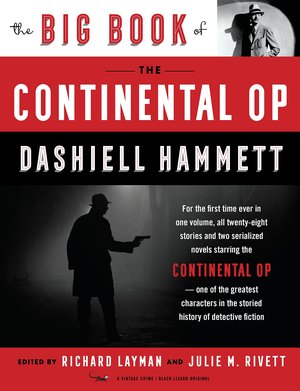 Yesterday, as I was preparing a New Treasures piece on Otto Penzler’s newest Vintage anthology, The Big Book of Rogues and Villains, I stumbled on a listing for one I’d never seen before: The Big Book of the Continental Op, a massive omnibus of classic fiction by Dashiell Hammett, perhaps the greatest crime writer of the 20th Century.

Edited by Richard Layman and Julie M. Rivett, The Big Book of the Continental Op gathers all 28 of Hammett’s Continental Op stories into one place for the first time, including the novels Red Harvest and The Dain Curse. It arrives in trade paperback on Tuesday.

Now for the first time ever in one volume, all twenty-eight stories and two serialized novels starring the Continental Op — one of the greatest characters in storied history of detective fiction.

Dashiell Hammett is the father of modern hard-boiled detective stories. His legendary works have been lauded for almost one hundred years by fans, and his novel The Maltese Falcon was adapted into a classic film starring Humphrey Bogart. One of Dashiell Hammett’s most memorable characters, the Continental Op made his debut in Black Mask magazine on October 1, 1923, narrating the first of twenty-eight stories and two novels that would change forever the face of detective fiction. The Op is a tough, wry, unglamorous gumshoe who has inspired a following that is both global and enduring. He has been published in periodicals, paperback digests, and short story collections, but until now, he has never, in all his ninety-two years, had the whole of his exploits contained in one book. The book features all twenty-eight of the original standalone Continental Op stories, the original serialized versions of Red Harvest and The Dain Curse, and previously unpublished material. This anthology of Continental Op stories is the only complete, one-volume work of its kind.

Vintage’s Big Book series is a gift to genre fiction lovers of all stripes. Many of my favorites — including The Big Book of Ghost Stories, The Big Book of Christmas Mysteries and The Vampire Archives — were edited by Penzler, but they also include the monumental Big Book of Science Fiction, edited by Jeff VanderMeer and Ann Vandermeer, which may be the largest single SF anthology ever published. There are nearly a dozen Big Books at this point, and they’re well worth tracking down. And they make great Christmas gifts!

The Big Book of the Continental Op will be published by Vintage Crime/Black Lizard on November 28, 2017. It is 752 pages, priced at $25 in trade paperback.

I almost pre-ordered it, but realized I had both novels, and an Op collection that has all but 4 of the stories, already on my shelf. So I’ll re-read that instead.

It took me decades to find all the stories f the Op and this will make a nice addition to my library similar to Altus Press printing volumes of Frederick Nebel’s Cardigan and Raoul Whitfield’s Jo Gar stories-highly recommended. Note: There was a previous edition of the Jo Gar series but four stories were left out since they were a loosely connected story. The Altus edition contains them all.

I am curious to see how a couple of the Black Mask serializations differ from the commonly available versions.

I think I have every Op story – it’s an excellent series and because of the number of stories, it’s really where Hammett mastered his craft.

Odd. There was a THE CONTINENTAL OP: THE COMPLETE CASE FILES ebook collection out last year from Open Road Media which seems to have evaporated from Amazon and the ORM sites.

I wonder if there was a rights dispute?

> I wonder if there was a rights dispute?

That’s a pretty reasonable guess. I doubt these works are in the public domain, but maybe Open Road thought they were?

On closer look, it appears ORM split the single volume into multiple volumes. I don’t know if they all add up to ‘complete’ or if anything was dropped in the transition.

Picked it up today. The unpublished material was a huge surprise which any Hammett fan will want to be aware of. It was the beginning of a new Op story Hammett started but never finished. The good news was he left notes on the direction the plot was going. Also included were letters originally published in Black Mask regarding fan letters written in and one long letter related to fingerprints. I had never heard the short story titled Three Dimes ever referred to all these years and nice to have all the Op stories in one place now. Still keeping my varied paperbacks and hardcovers though.