Everyone likes a party. Many of us even like to plan parties, especially writers (who, if they didn’t like process, wouldn’t be writers.) But do we like to write about them? Maybe not so much

Of course there are some memorable parties to be found in Fantasy and SF literature. The two that immediately come to mind are the birthday party that opens LOTR, and the high tea that opens The Hobbit. Is it significant that both of these involve not only the same author, but the same character?  I think so. I also think it’s significant that Bilbo doesn’t plan the party in The Hobbit (it’s Gandalf’s do), but he does plan the one in LOTR. Seems like it might take a little age and experience to organize a big affair.

For the most part parties in literature seem to be limited to pre-WWII novels where omniscient narrators can give us interesting overviews, occasionally zooming in to present important detail. Look at Jane Austen: with or without zombies these people spend a lot of time at balls, dances, tea parties, supper parties and the like. Otherwise, how would the characters, particularly the women, meet one another? Even Cinderella meets the prince at a ball.

A party is also a great way to allow your characters to interact in public, and reveal all kinds of details about themselves that you might otherwise have to take chapters to show. Still, unless you are using an omniscient narrator, a party scene can be deadly both to read and to write. Think of the last big party you attended. If the narrative of the story was told from your point of view only, the reader would get a very limited understanding of what happened.

Do parties have any other narrative use? Do they forward the plot? I’d say they do, but only by what we’ve seen already: introducing characters to the reader and allowing characters to meet each other. By the way, however planned they might be, I don’t think we can include ceremonies in our definition of parties. Maybe the reception, for example, but not the wedding itself.

What about parties in movies and TV?

In Richard Lester’s The Three Musketeers (1973) Cardinal Richelieu asks the king to hold a ball. His purpose is to force the queen into admitting that her diamond studs are missing. Since the climax of the film effectively takes place during this ball, it’s a pretty useful narrative device, in terms of characters encountering one another, unforeseen obstacles, and delaying tactics which contribute to the suspense.

The Ewoks have a party at the end of Return of the Jedi (1983), and there’s a big rave in The Matrix Reloaded (2003), but both of these are really celebrations, a particular type of party. And as far as I’m concerned, they’re a waste of the viewers time. Oh sure, it’s been suggested that parties can make for great visuals, but if I’m not learning something about the characters or plot, I’m not interested.

And that brings us to “The Red Wedding” in Game of Thrones, a party that, like the affairs in the Tolkien novels/movies, appears in both print and film form. Though, as I suggested above, it might be more accurate to call this scene “the red reception.”  In any case, we certainly can’t say we’re not learning something about the characters and the plot. It’s a great visual too, now that I think about it. 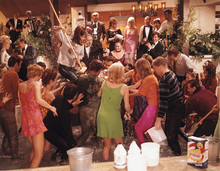 You can’t talk about parties in film without looking at The Party (1968), a classic starring Peter Sellers. This might be the only example of a movie that’s actually about a party. In that sense, there’s no story to tell, or plot to advance. However, that doesn’t mean there isn’t narrative. The movie is a satire, so doesn’t require plot, and characters are either archetypal, stereotypical, or allegorical – or combinations there-of. There’s a certain group of people in the world who fall down laughing when they hear the phrase “birdie num-num” and that’s how you can tell they’re fans.

Violette Malan is the author of the Dhulyn and Parno series of sword and sorcery adventures (now available in omnibus editions), as well as the Mirror Lands series of primary world fantasies. As VM Escalada, she writes the Faraman Prophecy series. Book One, Halls of Law, is available in both print and audio. Find her on Facebook and follow her on Twitter @VioletteMalan.

Until your post, I wasn’t conscious of the party as a narrative device, but I realize now that I LOVE the party as a novel strategy. It can bring key cast members together to clash and manipulate in that nasty/delicious way of social one up-manship and heart-pounding reveals.
I brought on stage a party in 1936 Berlin in At the Table of Wolves where another features enters in: all those intimidating SS uniformed-men gathered in one place, clinking champagne glasses and reminding my MC (a spy) of the clear and present dangers. Plus I made it a friggin’ Christmas Party. Smiling Nazis and Christmas trees. Oh yeah.

I’ve encountered memorable parties in a number of computer RPGs — I remember examples in the Dragon Age, Mass Effect, Dishonored and Witcher games, although I’m a bit fuzzy on details. It’s great in a video game (or a tabletop game, I assume) because it gives a good reason for the player to stay in a relatively confined space mostly talking to different people (and sometimes trying to sneak into places you’re not supposed to be) with only minimal, if any, combat.

In my comment I meant to say a sequel to At the Table of Wolves… Nest of the Monarch.
But another thought about parties as a narrative device: It’s related to the idea of putting characters in a “box.” That is, you confine a few characters in a place (elevator, space ship, barracks) where they are stuck and tempers and opposing views clash or stimulate dramatic responses.

To Kay: I think when it works, the party can be magnificent. The trick is to make i6t work. On thinking it over, I’m wondering whether a first-person narrator might serve the purpose.
I like the idea of putting characters in a box, and I see what you mean when you suggest that a party is a type of box.
I’m going to have a look at the novels you mention. Nazis and Christmas? Oh my.

To JoeH: I’m not very familiar with the RPG world, so this aspect of things didn’t occur to me. It’s more like parties in real life, isn’t it?

If you mean keeping the point of view tightly with one person, that does seem to open up all kinds of possibilities: One’s insecurity amid frenemies and enemies, the tension of the MC’s desire and the need to forward it among all these people, perhaps the awful gaity contrasted with what the MC knows and fears. That tight viewpoint is perfect to brew up a little paranoia. 🙂

I actually am not crazy about parties. But I kind of enjoy writing about them because of all the things that can go wrong.

One of my favorite scenes in sf/f is Miles’ carefully planned dinner party in Bujold’s A Civil Campaign: good intentions pave the road all the way to social hell. (“Mother, Father, may I introduce–SHE’S GETTING AWAY!”)

To Kay: yes, that’s exactly what I meant, only “ne’er so well expressed.” Thank you. Now I’m rather anxious to try it out, but unfortunately the WIP doesn’t allow for it. The next one might.

To James: Perhaps it’s all the more effective when we’re dealing with a well-known character, then we get all the irony of the situation, with added suspense and worry because we’re so much more committed to the character.