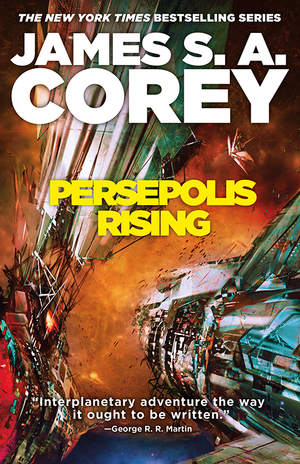 James S. A. Corey is the pen name of fantasy author Daniel Abraham (the Long Price Quartet) and writer Ty Franck. Their Expanse series, a New York Times bestseller, is one of the most popular SF series on the shelves at the moment. It has been filmed as The Expanse, a breakout hit for the SyFy channel, which was just renewed for a third season.

At six volumes this is a substantial reading project already. The seventh novel, Persepolis Rising, arrives in hardcover next month from Orbit.

In the thousand-sun network of humanity’s expansion, new colony worlds are struggling to find their way. Every new planet lives on a knife edge between collapse and wonder, and the crew of the aging gunship Rocinante have their hands more than full keeping the fragile peace.

In the vast space between Earth and Jupiter, the inner planets and belt have formed a tentative and uncertain alliance still haunted by a history of wars and prejudices. On the lost colony world of Laconia, a hidden enemy has a new vision for all of humanity and the power to enforce it.

New technologies clash with old as the history of human conflict returns to its ancient patterns of war and subjugation. But human nature is not the only enemy, and the forces being unleashed have their own price. A price that will change the shape of humanity — and of the Rocinante — unexpectedly and forever…

Persepolis Rising will be published by Orbit on December 5, 2017. It is 560 pages, priced at $28 on hardcover and $14.99 for the digital edition. The cover is by Daniel Dociu. See all of our recent coverage of the best upcoming SF and Fantasy here.

I haven’t read the books—yet—but the TV show is one of my and my wife’s favorites. I’m glad to see the SyFy is back into making actual good sci-fi (and fantasy, for that matter).

I haven’t attempted to integrate Twin Peaks, the Return into the list, and it may be an apple and oranges thing as far as Twin Peaks and the rest of TV, but this is my list of current favorite TV shows:
1–Game of Thrones
2–Westworld
3, 4 (tie)–The Expanse, The Magicians
5–Legion
6–iZombie (and I hated pushing this down to 5, but Legion was *so* good).

I’m afraid I struggle with a massive series like this. I read and loved the first book, but by the time the second came out I’d forgotten just enough that I had to re-read the first again. I started the second but got sidetracked about a third of the way in by some other new books (hey, it happens!) and by the time I got back to it…yep, had to start over. Now I’m looking at the third book (and I have the others on the shelf) and thinking I’d better refresh my memory before starting it.

I really like the books, but I seem to have trouble focusing my attention on a straight-through reading of them.

I read the first four books pretty much straight through on vacation a few years ago (was taking the train from Winnipeg, MB, to Churchill up on Hudson Bay, so had plenty of reading time) and read #6 at the beginning of 2016, and in the next few months I’ll read #7 & #8 back to back. Love the series!

As far as TV, my list would include (in no particular order) Expanse, Game of Thrones, American Gods, Magicians and The Good Place.

Oops. Reduce all of my book numbers by 1 — was confused by the novel list, which shows The Expanse although that’s the series name — Leviathan Wakes was actually the first book.