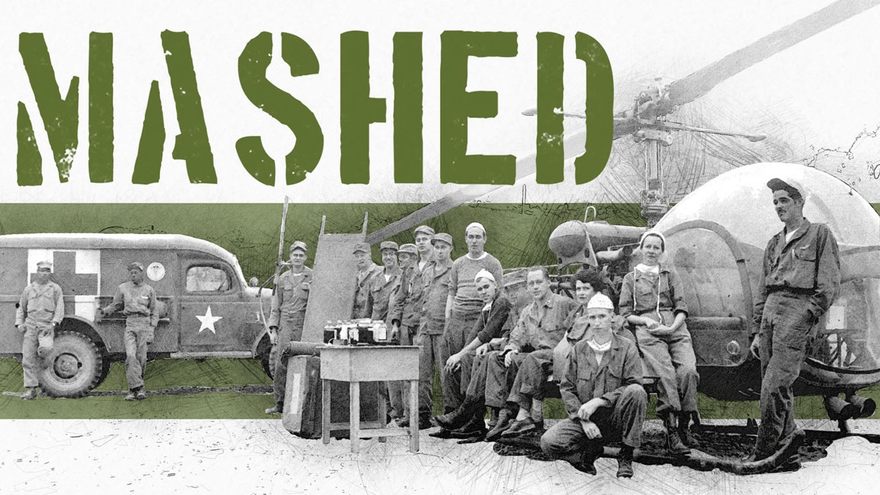 “Keep in mind that you can’t take that many well-educated, highly intelligent people and restrict them to live in an area the size of a football field and not expect some very odd and unusual things to happen.”

So said former Korean War helicopter pilot Ed Ziegler, in a quote that starts off MASHED’s early Gameplay section and gives a hint of what the following pages hold in store.

‘MASH’ is a historical acronym that stands for ‘Mobile Army Surgical Hospital,’ though it was popularized by the M*A*S*H film and television series, which may very well be where you first learned of it. The game acknowledges M*A*S*H as a good source of inspiration for your table, but is not based directly on it, thus avoiding any messy trademark or copyright issues. Instead, MASHED content comes from dozens of historical works and military manuals. Fortunately, since they are the same sources as those used by the M*A*S*H producers, the ‘feel’ of the game can be very much like that of the show itself, mixing light comedy, gallows humor, and mature situations.

The core rules are based on Vincent and Meguey Baker’s Apocalypse World (Meguey is also credited as a developmental editor on this book), and inspired by other Powered by the Apocalypse games such as Jason Morningstar’s Night Witches. If you’re familiar at all with the PbtA engine, you’ll have a good idea of how the rules work. 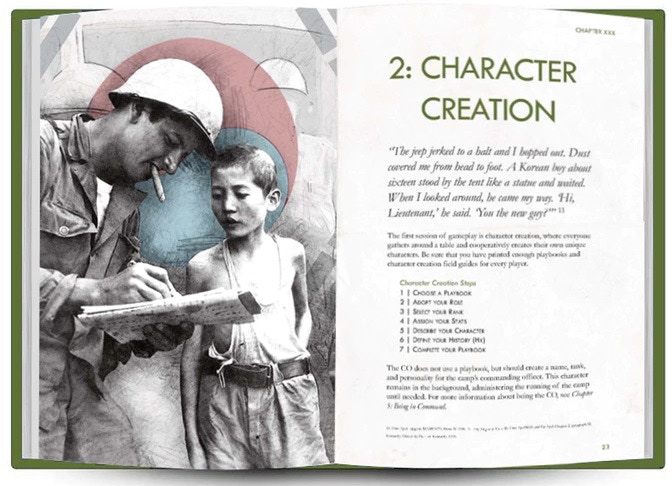 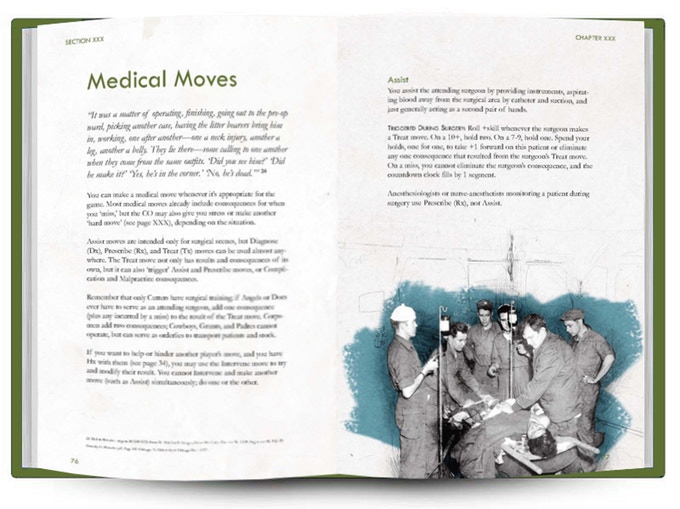 Of course, there are some new thematic concepts introduced, such as a Stress tracker that can affect your personality (aka Role) if it gets too high, and unique surgical rules that puts your players around a patient playsheet (complete with human body and various countdown and harm clocks) and has them work together as a team. Again evoking thoughts of M*A*S*H, gameplay alternates between operating tent scenes and ‘camp life’ scenes. During surgery, you make hard choices such as who gets operated on first, or whether you can risk spending time on one patient at the risk of another one’s life (scenes that are almost guaranteed to bring Stress points upon the players). These scenes then spur what happens outside of surgery, giving you an incentive to find ways to relax and remove those Stress points from your character.

There are seven different character types, or playbooks. Players are encouraged to play medical staff: the nurses (Angels), surgeons (Cutters), general practitioners (Docs), and enlisted medics (Corpsmen). However, playbooks for mechanics/drivers/pilots (Cowboys), administrative staff/soldiers (Grunts), and the camp chaplain (Padre) are available to cover the different kinds of personnel that were part of a Korean War MASH. 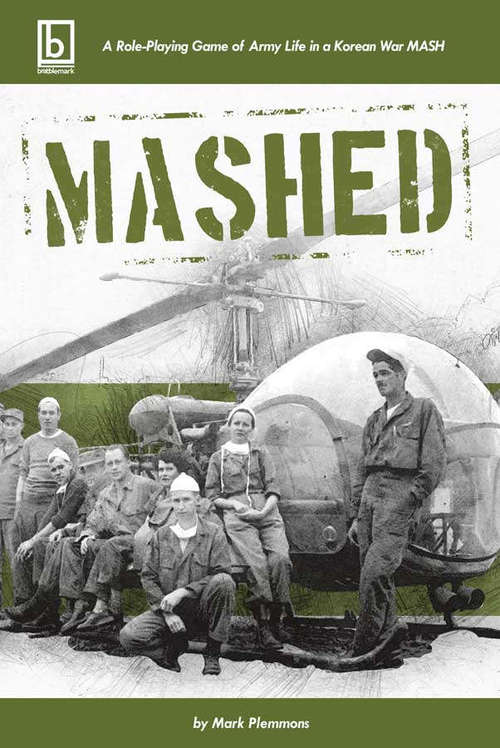 As in most PbtA games, each playbook has its own unique rules in addition to the game’s basic rules. Each playbook can also choose a Role, or personality type, which provides a further unique move and which you can change to another Role when your Stress gets too high. To further evoke the feel of a 1950s Army unit, each playbook is designed to be printed double-sided on a landscape oriented sheet of paper, then folded to resemble a vintage Army field manual. If you want to check these out, they are freely available (along with the patient playsheets and some other worksheets) in the “Complete Handouts” download on RPGnow and DriveThruRPG.

Individual chapters (and most sections) begin with a quote from a soldier, journalist, medic, or politician of the Korean War era, and help to set the tone for the following text. The fonts are mostly black, with headers and special text boxes appearing in ‘Army green.’ A few maps and flowcharts are scattered throughout and used to quickly highlight things like the country map, branches of the US military and its UN allies, how casualties are transported from the front lines and through the hospital tent, and so on. There is some black and white line art taken from or reminiscent of vintage Army manuals, but most of the art features old photographs that have been digitally altered into a more hand-drawn appearance, then given a single accent color to evoke the style of 1950s magazine art. 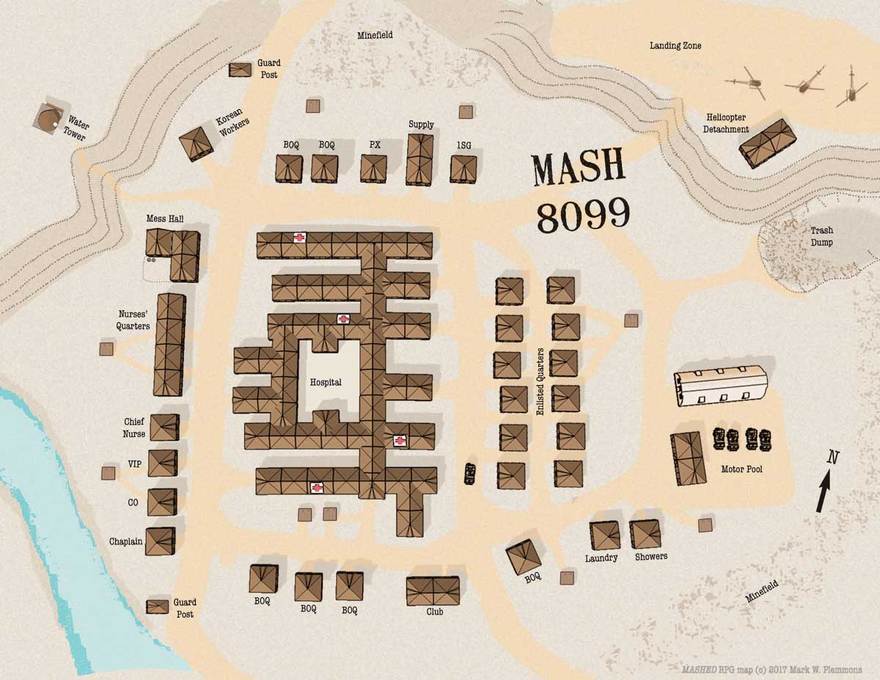 A quick summary of the book’s chapters reveals: 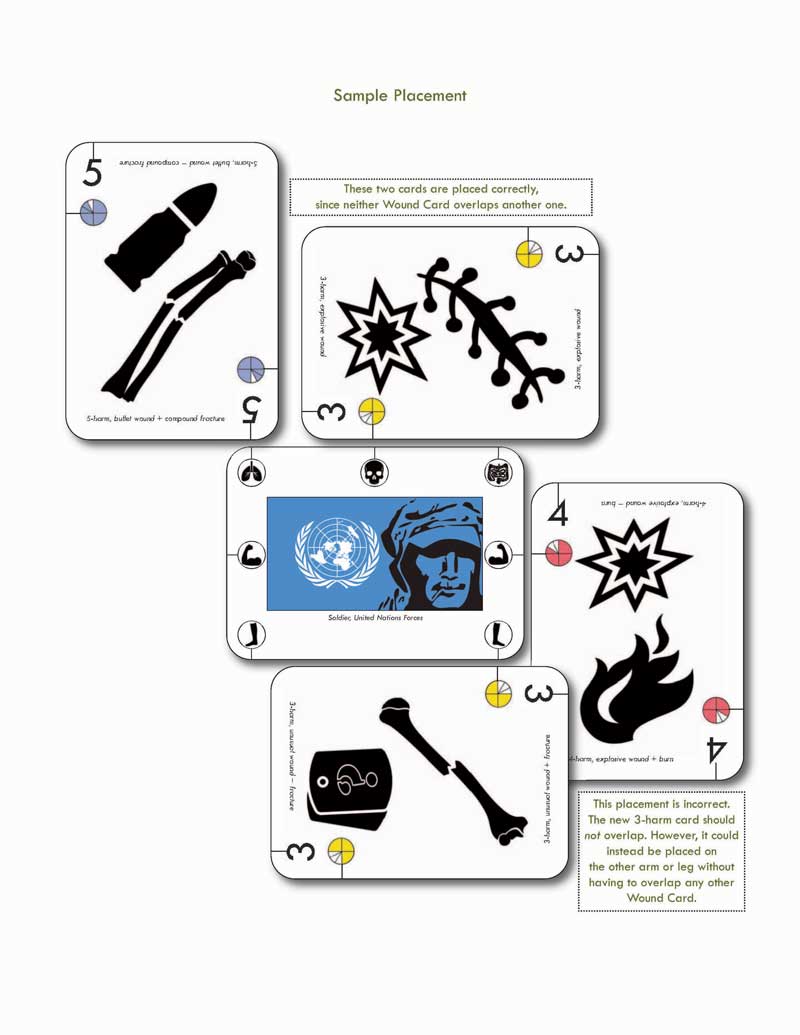 Also available (for free and/or purchase) are several items designed to reinforce the theme and make gameplay even easier, such as: a 1950-1953 calendar marking important dates, seven deluxe 20-page character playbooks, two CO workbooks for running the game and tracking NPCs, a sample event workbook, and three card decks for spontaneously generating casualties and wounds, tents and local landmarks, and unusual events and items.

Check out the complete game on RPGnow and DriveThruRPG.

Mark Plemmons is an Origins and ENnie award-winning writer and founder with over 16 years of experience in the role-playing and hobby game industry, having also served as: writer, editor, art director, project manager, and/or graphic designer for the HackMaster, Aces & Eights, Adventures Dark and Deep, Baker Street, and Dungeons & Dragons-branded Kingdoms of Kalamar RPGs, multiple Dungeons & Dragons and Knights of the Dinner Table comic book series, and more. He is also available for consulting, editing, and other freelance projects.

Just so long as there are rules that say that you have to have a proper Army haircut, no matter how zany/compassionate/surgically competent you may be.

I like the Powered by the Apocalypse system quite a lot, and this hack sounds pretty outstanding. It is a bit of a niche setting, which probably works in favor for bringing the mechanics and the setting together (cf. Pendragon). But that also means I would need to hunt up players for it very carefully. Oh, well, tally ho!