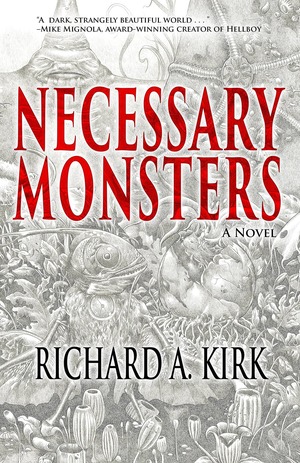 Richard A. Kirk (not to be confused with Richard Kirk, which was the pseudonym Robert Holdstock used to write sword & sorcery novels in the Raven series) is an artist with a number of covers to his credit. His short novel The Lost Machine, a tale of “deadly plagues, witches, and artificial intelligence in a dark fantastical setting,” was serialized at Weird Fiction Review (check out their interview with him here).

In his first latest book, Necessary Monsters, he delivers a caper novel set in a dark and wondrous world. It’s available now in trade paperback from Arche Press.

Lumsden Moss is an escaped thief and an unrepentant bibliophile with a long-suffering desire to foist some karmic retribution on those who have wronged him. But when the opportunity to steal a rare book from the man who sentenced him to prison puts him on the wrong side of the wrong people, Moss finds himself on the run. And it’s not just the book he stole that these people want, it’s also the secrets of a long-forgotten location on Nightjar Island, a place cursed and abandoned since the Purge.

When Moss falls in with Imogen, a nimble-fingered thief who has taken a traveling bookcase filled with many secrets, he starts to realize how much of his unsavory past is indelibly tied to a frightening witch-child and her nightmarish pet monster.

In a fantastic world, still recovering from a war where magic and technology were fused together, Moss and Imogen must decipher the mystery of their mutual pasts in order to illuminate the dark heart that still lurks on Nightjar Island.

Necessary Monsters was published by Arche Press on June 6, 2017. It is 384 pages, priced at $18 in trade paperback and $7.99 for the digital edition. The cover is by Richard A. Kirk. Buy copies right from the website.