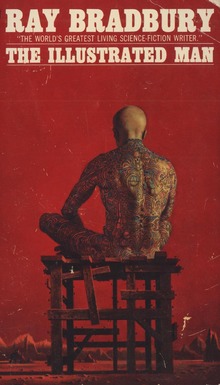 I often find that the idea of something is more frightening than the thing itself – unless you have a phobia, of course, in which case the reality is much, much worse than you imagined.

There’s a difference between fear and horror, but only because horror is, I think, a bit more existential. You can be afraid of something specific and not lose your grasp on the world, but horror is a feeling that sweeps over you like a wave, that’s bigger than you are, that momentarily stops your existence. In a manner of speaking, horror is a form of the sublime – the feeling you get when you come face-to-face with something that’s too big for your finite mind to grasp.

So for me, all the slashing, blood-spurting, bug-crawling, chain-saw wielding, limb-chopping stuff is just icky. Startling, sure, if it’s well done. It might make me recoil, it might frighten me, but it doesn’t stop my breath. It’s not horror. 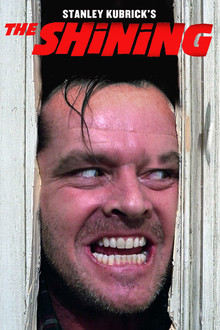 Horror is the moment in Stanley Kubrick’s The Shining, when Wendy looks through Jack’s manuscript and sees the phrase “All work and no play makes Jack a dull boy” written over and over again. As narrative, as paragraphs, as dialogue. The moment when you realize how long it must have taken to type all that out, meaning how long it’s been since Jack was really Jack.

People not being who they are, or who you imagine them to be, is another point of horror. Invasion of the Body Snatchers* captures that pretty well. The moment when the child realizes that these beings aren’t his parents; they’re just something else that looks like his parents. That realization calls into question every experience that came before it, and colours every experience that will follow it. The world is irrevocably changed.

Sometimes people find out they aren’t who they think they are, like Kurtz in Heart of Darkness.

The concept of serial killers, and the knowledge that they’re out there, that’s frightening. The idea that someone you know might (could) be one? And you never knew? That’s horror. 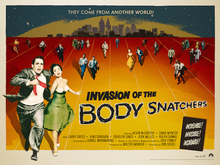 Reality not being what you think it is? That can be horror. That’s usually the point of those stories kids tell themselves around the camp fire, (if the dog’s dead, what’s been licking her hand?) Wendy’s shock (and that of the audience/reader) comes not only from the sudden awareness that Jack isn’t Jack anymore, but from the realization (on her part, we’ve been witnessing it all along) that her reality isn’t real, and hasn’t been for some time.

Though the example I’m using here is from King/Kubrick, Ray Bradbury is the absolute master of this kind of horror, at least in the written form. “The Veldt,” “The October Game,” or my personal favourite, the story I’ve never been able to reread, “Gotcha.” He’s often spoken of as a master SF writer, but for me, it’s all about the horror.

*I haven’t read it, so I can’t speak to the Jack Finney novel

I couldn’t agree more – the essential Bradbury is the frightening Bradbury, and it is indeed that identity-shift that can be really terrifying, as in “Mars Is Heaven!” Or “Hail and Farewell,” which is either heartwarming or gut-wrenchingly evil; I’ve never been able to decide which. (Though as I’ve gotten older, it’s gotten more evil.)

I remember a John D. MacDonald crime story I read one, where one character turned out to be, not the very nice guy he appeared to be, but a very, very bad guy. MacDonald didn’t signal it in any way, no “we know there’s something not quite right about this fellow, don’t we” stuff, and when the mask came off it gave me quite a turn, more than I’ve ever gotten from any overt “horror” story.

I, too, agree with Violette about Ray Bradbury. “Gotcha!” is a quite sublime piece—terrifying and not a little subtle at the same time. I appreciate it especially because it was written relatively late in his career: 1978. I am another reader who would nominate this as my favorite or second favorite Bradbury story.

And don’t forget “The Burning Man”, another story with a similar goosebump ending.

To Thomas: I was thinking in particular about some of the Martian Chronicles stories, I just couldn’t pick out any one in particular. I’m a big JD MacDonald fan, and I think he has a deft touch in exposing the human psyche – can there be anything more horrifying?
To dolphin: If I remember correctly, “Gotcha” first appeared in a Playboy magazine, and that context made it even more horrifying. Total agreement on “The Burning Man.” His novels don’t have the same kind of impact, though there are individual scenes in them which do. I wonder if the short story is the true form for horror.

You touch on some really big ideas here: difference between fear horror, sublimity, existentialism, etc. But the following really caught my attention: “Reality not being what you think it is? That can be horror.”

I think one of the main reasons I got into philosophy as a career was my attraction to this idea/experience. Some of the best horror tales make you feel as if the world is whirling “out of orbit”–what you thought was the case, may not be the case.

I agree that Bradbury, at his best, does this well. Thanks for this post!

“Gotcha!” first appeared in Redbook, August 1978, and was collected in only one of his books, the 100-story THE STORIES OF RAY BRADBURY (1980). I know from a Charles Platt interview with Bradbury that it was actually written in 1978, unlike many of his later collected stories, which had first appeared decades earlier.

It’s also one of the relatively few Ray Bradbury stories to be included in a “best of the year” anthology, namely Terry Carr’s THE YEAR’S FINEST FANTASY, VOLUME 2. He could pick ’em, that Terry Carr.

To dolphin: thanks for the correction. I knew I read the story in a magazine, I just didn’t realize it was Redbook, which certainly published fiction in those days. I was working in a retail store at the time, and frequently bought Redbook and Omni if I finished the book I’d brought with me.

To James; you’re very welcome. It’s my husband who studied philosophy (my degree is in literature) but we have a lot discussions on topics like these.

On the subject of OMNI (well, Violette mentioned it), the print version of the magazine has been rebooted, and the first issue in over two decades reportedly appeared this month (with fiction by Nancy Kress, inter alia).

I’ve seen a cover illustration, but what puzzles me is that I can’t find any website for the new magazine, nor is it featured on their facebook page (as of 24 hours ago; I haven’t checked since).