Last month I bought a remaindered copy of The Risen Empire, the opening novel in Scott Westerfeld’s acclaimed Succession series. Of course that meant I had to track down the second and final volume, The Killing of Worlds. In the process I had a quick look through our archives to see ifBG reviewers had had anything to say about them over the years.

As usual, our staff didn’t let me down. Martin Page held up the first volume as an exemplary achievement in his post “How and Why You Should Withhold Information from the Reader,” saying:

For example, Scott Westerfeld’s marvelous The Risen Empire quickly turns out to be about a secret. We see one team try to expose the secret and another — who know what it is — ruthlessly try to preserve it.

Here’s the back covers of both volumes.

Both books are still in print from Tor. Here’s the publishing details. 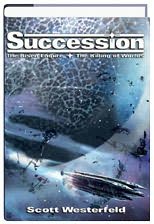 Both covers are by Stephan Martiniere.

Both books are scheduled to be reprinted in mass market paperback by Tor in July of next year. There’s also a hardcover omnibus edition containing both novels from the Book of the Month Club, titled Succession; it appeared in November 2003.

Scott Westerfeld is also the author of Afterworlds, the Zeroes series, the Midnighters trilogy, The Uglies series, and the Leviathan Trilogy. Our previous coverage includes:

See our previous coverage of the best in Series Fantasy here.