“Have you given any thought to what you are going to do if — rather, when — you make it to the top?”

“Look for trouble,” Dilvish said. “Defend myself at all times. Strike instantly if I see the enemy.”

Black and Dilvish to each other in “Tower of Ice” 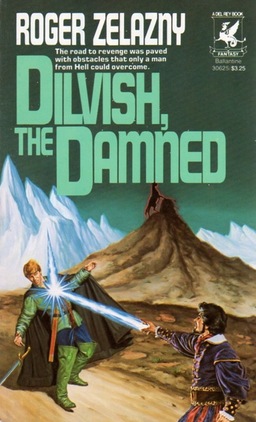 Dilvish, the Damned (1983), by Roger Zelazny, had been on my list of books and stories to avoid because of who recommended them. With this book, it was someone I played D&D with. In fact, he introduced me to the original D&D rules back in 1977 or ’78.

He was, and remains, the most voracious reader I’ve ever known, though he rarely reads outside of sci fi and fantasy. He would always tell me about whatever book he was reading — often read while he walked the mile and half to my house. When he’d describe a book to me, though, it was always about how cool and awesome the most powerful characters were. Big cowls and fancy wizardly skullcaps were symbols of greatness. The more absurdly godlike the protagonists were, the better.

A few years ago, he told me he was disappointed that the Twilight books didn’t end in an epic all out vampires vs. werewolves war. That Stephenie Meyer wouldn’t do that really didn’t make sense to him. It’s that sort of take on books that led me to take for granted that any book he suggested was going to annoy me as much as it excited him. I’ve overcome that block slowly. It took me nearly thirty years and a lot of positive recommendations to read Roger Zelazny’s Amber Chronicles. Even loving those — which I do — it took me another decade to pick up Dilvish, the Damned.

Dilvish is heir to both a Human house and an Elvish house, and a heroic warrior of great prowess. Two centuries ago, he came up against the powerful, evil sorcerer, Jelerak. The wizard, far stronger than Dilvish knew, turned the half-elf to stone and imprisoned his soul in Hell. It is only when Portaroy, a town once saved by Dilvish, comes under a new attack, he is freed to return to the mortal world with a metal horse named Black, and a desire to avenge himself on Jelerak.

Dilvish is part of the rebirth of swords & sorcery in the mid-60s alongside Elric and the Lancer Conan. Several of Zelazny’s stories were reprinted in S&S anthologies from the 1970s. Some of the stories are at least equal to those of Moorcock and Leiber, and way better than most by Lin Carter and John Jakes. Dilvish, the Damned is a 1983 fixup of all eleven Dilvish short stories. The first was originally published in Fantastic in 1965, and the last two first saw light of day in this collection.

“Passage to Dilfar” opens the book, and Dilvish is met escaping from a lost battle. He and his iron horse, Black, are the only survivors of the onslaught of the armies of Lylish, Colonel of the West. On the road to the city of Dilfar, he is beset by increasingly powerful foes seeking to stop him. There are crossbowmen, stars of death, and a man with reputedly impenetrable armor.

The next few stories, “Thelinde’s Song,” “The Bells of Shoredan,” “A Knight for Merytha,” “The Places of Aache,” and “A City Divided,” are about Dilvish’s journey to raise a cursed army to fight the Colonel of the West. Along the way to and from Rahoringhast, from whence he can summon the army, various evils and strange events are encountered.

The rest of the stories, “The White Beast,” “Tower of Ice,” “Devil and the Dancer,” “Garden of Blood,” and “Dilvish, the Damned,” describe Dilvish’s peripatetic journey to find Jelerak and destroy him. They are much better than their predecessors.

There are good things about these stories. Filled with evil priests, haunted castles and shrines, there’s a strong Clark Ashton Smith vibe to them. The episodic nature of the book gives it a dreamlike quality — things sort of just happen, are dealt with, and then other things happen. The randomness of events makes it impossible to guess what will happen next. The reader might presume the Colonel of the West will be faced head-on, and a showdown with Jelerak is forthcoming, but what Dilvish will have to fight along the way is anybody’s guess. 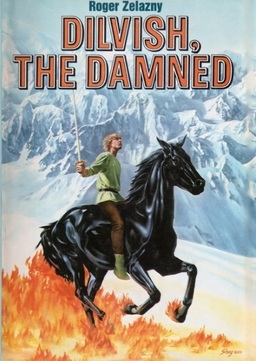 Dilvish is a engaging hero. Not so much at first, but as the stories progress he becomes wittier, and shows himself to be a man possessed of a good, even noble, heart, and a willingness to place himself at risk for others. In contrast to Moorcock’s emotionally battered heroes given over to gloominess, two centuries of damnation have left Dilvish psychologically sound, if focused entirely on hunting down Jelerak.

Dilvish’s adventures are set in what I’ve always thought of as ur-fantasy land. It’s the type of world created by writers like E.R. Eddison and Lord Dunsany before Tolkien and Howard created the templates that are still used (excessively) today. The names of people and places don’t echo historical ones, and the roots of the stories lie closer to fairy tales and dreams than the carefully constructed and overly elaborate plots of modern fantasy tomes. The universe of Dilvish is a far vaguer place than Middle-Earth, let alone ours. Anything can happen and, as long as the author has another idea, it does.

Unfortunately, in addition to looking to the character and storytelling attitudes of the past, Zelazny also looked to the prose styles. The early Dilvish stories are written in a pseudo-archaic style. While not as clotted as William Hope Hodgson’s in “The Night Land” or William Morris‘ in anything, it will readily remind the reader of them. In fact, the sequel to this book, The Changing Land, mentions Hodgson on the dedication page.

Zelazny seems to have been striving to make the stories read like legendary tales, but the stylization creates an emotional barrier between the reader and the stories. Unless a writer has the skill of Smith or Jack Vance, the distancing effect is difficult to overcome, and Zelazny doesn’t quite make it.

An example from “Passage to Dilfar”:

This was Dilvish, called the Damned, riding alone in the hills above Dilfar, bearing his message to that city. And though he rode the horse of steel, called Black, still did he not fear an encounter with Lance of the Invincible Armor before he delivered his message. 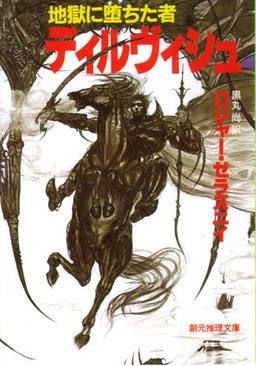 There are some striking images such as silver eyes containing “the hellspecks of starstuff,” but there’s too much writing like the former passage for my taste. It never feels authentic, and undercuts some of the power these stories should have.

The second round of stories, beginning with “The White Beast,” were written a decade after the first ones, and are a very different, better sort of undertaking. They build on the wit, especially the mordant banter between Dilvish and Black, present in the early tales. Zelazny has a greater control of his characters and the storytelling. The faux-archaisms are mostly absent, making the stories read more naturally. Without losing the dreamlike atmosphere of the early stories, Zelazny makes Dilvish (and Black) much more concrete, which lends emotional weight to his quest. He brings the secondary characters to life as well, no longer just serving as stock figures to face off against Dilvish. The best of these are the bickering brother and sister duo in “Tower of Ice,” who are both hilarious and sympathetic. Clearly, between the first story, written in 1964, and the last, written in 1983, Zelazny had become a much better writer.

Despite the weaknesses of some of the early tales, Dilvish, the Damned is a solid example of swords & sorcery from its second golden age. Zelazny was a worldbuilder of incredible originality and his stories thrum with energy. I’m sorry it’s taken me so many years to get to this collection, but I’m definitely glad I finally did.

Sadly, Dilvish, the Damned is not available as an e-book, well in English anyway. If you read Spanish, you can but a copy of Dilvish, El maldito. A paperback, however, can picked up for as little as 15¢ on Amazon, so you might as well get it. Any weaknesses of the early stories are more than overcome by a greater wealth of clever ideas and color than most of the doorstoppers weighing down the fantasy shelves contain in all their endless pages. The later stories are excellent and worth a read by any serious swords & sorcery fan. Also, from what I’ve heard, the sequel, The Changing Land, is even better.

I know I read a Dilvish story maybe in a Flashing Swords anthology. Before I finished reading your article I went searching for the ebook collection. Sigh. Hopefully it will made available before too long.

Somewhat similar to the Dilvish stories but much better is Zelazny’s stand alone novel, Jack of Shadows.

Yes! Jack of Shadows is a masterpiece.

I do like the Dilvish books as well — playful Zelazny is the best Zelazny.

Very interesting, Fletcher! I’ve never heard of this book before and will definitely be checking it out. Eerie ran a series called ‘Dax the Damned’ back in the early Seventies, and I can see certain corollaries – most interestingly, Dax was originally Spanish (he was called ‘Manly’ in his Spanish incarnation, ‘Dax the Warrior’ in his second incarnation in Eerie, then later rebranded for the third time – by Eerie – as ‘Dax the Damned’).

Good call on the resemblance to CAS, Fletcher. CAS essentially started — upon publication of “The Tale of Satampra Zeiros” — the OTHER branch of sword & sorcery that can be seen in the works of Leiber and Moore, along with later writers such as Vance and, to a certain extent, Moorcock. More cynical and sardonic, less visceral.

Been wanting to read this for a few years now. Think I’ll squeeze it in before year’s end.

Another great review! Thanks.

I disliked this book on first reading, in spite of the fact that I’d been waiting for a collection of Dilvish stories ever since I read “The Bells of Shoredan” in a back issue of Fantastic. Disliking Zelazny is a disorienting experience for me and I had to go lie down for a couple years.

But when I was reading the individual stories one by one, mixed in with the other stories in NESFA’s collected Zelazny edition, I liked them a lot better. I’m still trying to figure out why that is.

Part of it might be the cover. I think Zelazny’s long-intended title for the Dilvish collection Nine Black Doves would have been a million times better, and that cover painting of the Del Rey edition really puts the “uh” in “ugly”.

I’d be interested to read your thoughts about The Changing Land.

Wow, yes, that really is a dreadful cover.

For me, the disorienting experience of not liking Zelazny came with Changeling/Madwand. Although maybe I should give those a revisit one of these years.

I always liked this book. The Changing Land wasn’t as good as Dilvish in my opinion.