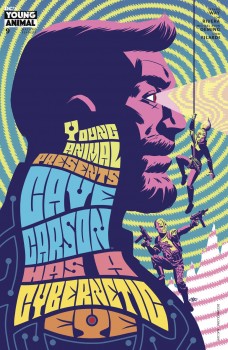 In 2016, DC launched a new imprint called Young Animal, an offshoot of its Vertigo stuff, led by Gerard Way and editors Jamie Rich and Mark Doyle. Young Animal’s goal is to relaunch some DC characters for mature audiences. I hadn’t been paying attention, but got drawn in by Cave Carson Has A Cybernetic Eye.

I was totally wowwed out by the Michael Avon Oeming’s art, which seemed to have equal parts of the best psychedelic stylings of Jim Steranko and Steve Ditko. But I was equally impressed with the very tight (perhaps too tight) scripting by Jon Rivera and Gerard Way. 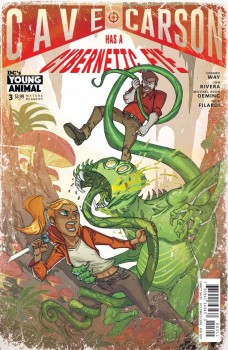 These writers make no info-dumps or dialogue to explain what’s happening. The reader has to pick it all up in the reactions, emotions and action, and it is gloriously weird, with a subterranean car that drills its way into trippy underground worlds.

Given my enjoyment of CCHACE, I checked out Shade the Changing Girl. It was beautiful, but I didn’t understand much. Something magical was going on with Shade, and from the comments I’ve seen, some people *really* dig it. It’s about an alien coming to inhabit the body of a girl who was kind of left to die in an incident of bullying. The alien wanted access to a psychedelic power it would get by inhabiting the girl. Trippy. Perhaps not surprising if this is a mature reboot of one of Ditko’s creations. I’m not sad I tried it though. 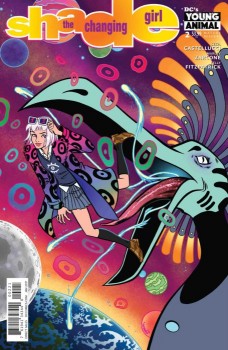 Then I saw that the Young Animal Imprint included Bug: The Adventures of Forager, a character I’d encountered in my reading of Jack Kirby’s Fourth World Saga (which I wrote about here in January). DC had picked another great character to match the imprint’s tone and feel. 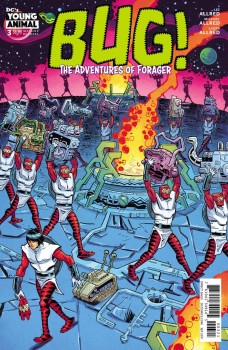 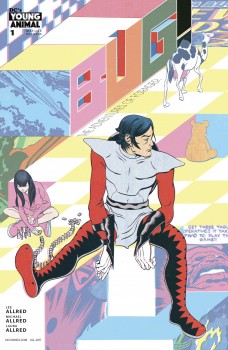 Bug was a weird character 45 years ago as a member of a humanoid member of an insect-like hive structure. Here, Bug is trying to escape wherever he is. There’s lots of strangeness and originality here and I’m pretty sure I enjoyed it. 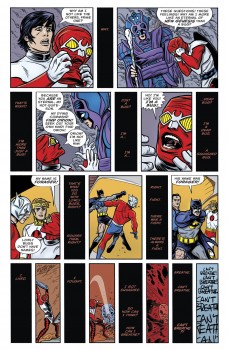 The last of the four series for me to check out was Doom Patrol, which I had a little more familiarity with, but not a whole lot of affection for. The first three comics I mentioned were weird and bright, whereas I knew from my previous DC reading that Doom Patrol was anything but bright (I believe that at the end of their very first run in DC Showcase, they were all blown to bits on an island). 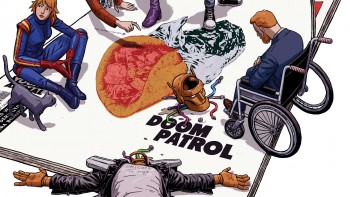 And I wasn’t surprised here. Doom Patrol was weird dark with some post-modern flourishes (or broad brush strokes), like 1-page intermission-like vignettes called “What’s Going On With Niles Caulder?”

I didn’t get into Doom Patrol, but I appreciate the fans who think this is the best thing since sliced bread. I’m a strong believer that audiences are very heterogeneous and that it’s possible for publishers to target market segments. I overlap with Young Animal’s target audience a lot on Cave Carson, and a fair big on Bug, and not so much on Shade or Doom Patrol. This surrealist, absurdist imprint is worth checking out. They are doing something fresh with comics.

I’d be curious to hear if anyone else had thoughts about the imprint, so chime in!

I tend to collect the less popular and diverse titles along with mainstream (Batman, Avengers) along with Jonah Hex, Enemey Ace, Blackhawk. Cave Carson is a guilty pleasure title that I’ve kept for years from his old Brave and Bold and Showcase appearances. He was given right shots at a title and never made it and frankly I thought he never would. Also the set is kept in memory of a childhood friend who traded me for B&B #33 way back in the day. So nostalgia brought me to this incarnation which delights and repels me (the language) and each issue is confusing and delightful. I was always jealous that Rip Hunter Time Master got a series and Cave didn’t. This is a lesson that if one waits long enough every character gets a title eventually. Still waiting for the western Johnny Thunder return with the red shirt look from All Star Western. As to Doom Patrol they began in My Greatest Adventure and took over the title with issue 86 and the last issue of the original series had them blown up and been launched constantly ever since. I have the DC Archives editions but gave up after the Grant Morrison run and the constant ret-cons. To be honest Young Animal just seems to be more Vertigo taken to the next level.