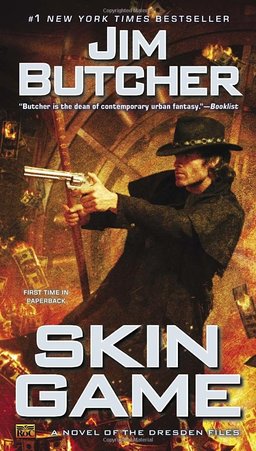 The title for this post is no exaggeration – until recently, I had never successfully reread a book. I don’t know if anyone else is in the same boat, but I’m blessed/cursed with an almost encyclopedic memory for storylines and characters. If someone asks a question about an old show I’m familiar with – whether it’s Fringe or 24 or The Good Wife – odds are that I can answer it, sometimes with exacting detail.

For example, this past semester a teacher friend and I were describing the ridiculousness of 24 to another colleague, and I could summarize each season in order, without hesitation. For some reason, I can still watch a movie or TV show I’ve seen before and enjoy it, but with novels I couldn’t seem to lose myself in the story the same as when I first read it. So I stopped trying.

But that spell seems to have been broken, courtesy of Jim Butcher. A couple weeks ago I was looking at my to-read shelf and didn’t feel like starting anything there (which sort of blew, since there are about twenty titles sitting there, staring at me with their lonely and judging eyes). There were several books there that needed to be read, either for the Aurora awards or for upcoming review posts here, but I knew forcing myself to read one of those would color my perceptions.

I was also hitting a point in discovery writing my new novel where I needed something to inspire me, and when you pick up a new book there’s always the chance it’ll disappoint you – like going on a first date, really (“he’s still single, ladies”). I ended up walking away from the shelf and figured I’d watch Netflix or play Fallout 4 or something, and try to pick a book another day.

Then I remembered talking with one of my best friends about The Dresden Files, and how we’re both waiting for the next book like dogs salivating over prime rib behind a glass divider (in the off-chance that Mr. Butcher reads this, we’re not those brutal fans that rag on writers for taking too long to finish a manuscript – you take your time, sir). He’s reread the series a couple of times, but obviously I haven’t. Part of the reason why I’m such a huge fan is because it’s fast-paced, character-driven, and emotionally riveting – the main things I want to accomplish with my new novel. I’ve reread the occasional scene from a Dresden book for inspiration, and since the compelling voice in my head urging me to read something wouldn’t shut up, I decided to try my luck with Butcher’s most recent installment, Skin Game (which was on my Top Ten Books of 2016). Worst case, I wouldn’t make it very far, return the book to my shelf, and find something else to do with my time.

Three days later, I had finished Skin Game for the second time. Somewhere about halfway through I realized that I had broken my curse, and tried to figure out how. I still remembered everything that was going to happen, but for the first time that made the novel more exciting, because I was looking forward to reading my favorite moments again. For a second time, I cheered when Dresden screams “Parkour!” and defeats the Genoskwa, worried over the crippled Michael Carpenter when he offers his life to Nicodemus, and was struck right in the feels all over again when Karrin and Dresden finally decide they’re more than friends. I’m also cursed sometimes with that stereotypical male quality of skimming instead of reading (there’ve been psych studies about this – Google it) but this time I slowed down, and appreciated more the ways Butcher’s word choice and tension-building, which I hadn’t noticed before. The entire experience was sort of like being home at Christmas, returning to a coffee shop you haven’t gone to in years, and sitting with a cup of tea while you soak in both the familiar space and the ways in which a hometown changes while you’re away.

I can’t guarantee that I’ll be as successful with the next book I try to reread. It’s possible that there’s something particular about the connection I’ve made with this series. And given how much friggin’ new fiction is out there, spending too much time rereading books would just put me further behind. But if I can reread a couple of my true favorites each year, that would probably be good for me. Because in the almost two weeks since I finished Skin Game, I’ve written about 24,000 words on my new novel. So thank you, Jim Butcher – you’ve inspired me once again.

I have the exact opposite issue. There are so many hundreds of novels that I absolutely, positively love that I am constantly in the mood to reread them. It is almost impossible for a new novel to hook me in, especially since even as I start to read it my brain is telling me that I would really, really rather read Lord of the Rings for the 15th time, The Foundation Trilogy for the 20th time, or The Belgariad for the 30th time.
Recently I thought I was able to overcome this when I was able to read Cetaganda by Lois McMaster Bujold for the the first time, but my attempts to read the other two stories in the Miles, Mystery, and Mayhem omnibus were not successful. I am currently rereading an old Star Trek TNG novel called A Rock and a Hard Place by Peter David.