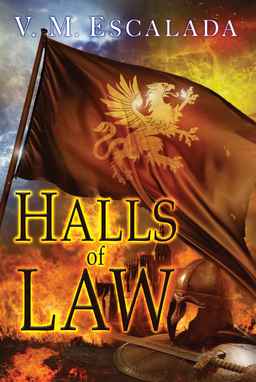 Our Friday blogger Violette Malan, author of the Dhulyn and Parno fantasy novels, has just launched an ambitious new series, the Faraman Prophecy, under the name V. M. Escalada. Violette talked about writing under a pseudonym in her most recent article for us, “What’s in a Name?”

I have to admit that when my agent first suggested I use a penname, my immediate reaction was unfavourable. There are all kinds of reasons for such a suggestion, however, some of which I touched on in a previous post. Today, I’d like to talk about the actual, practical experience…

My first concern? What explanation do I give people who know me, personally? After all, people who have never met/heard of Violette Malan, aren’t likely to ask for any. The short answer, by the way, is “it’s a marketing thing.” The long answer we don’t have time for. Buy me a beer sometime at a con and I’ll tell you.

Which brings me to my second concern: Who am I in public? At a con, for example? The easy answer is: I’m whoever was invited. That’s the name that will go first on the con badge. It’s not unusual, at cons, to see people with two names on their badges, the one who was invited, and (in brackets? smaller print?) the other one. If you weren’t invited as a special guest? If you’re just registered as a regular panelist? That’s when it gets tricky. Do you use the established, familiar name first? or the new one?

Halls of Law, the first book in the Faraman Prophecy, introduces a world of military might and magical Talents on the brink of destruction. Julie E. Czerneda cals it a “fresh, engaging new fantasy series set in a world of marvelous texture and magic.” It’s available now in hardcover from DAW.

The Faraman Polity was created by the first Luqs, and has been ruled for generations by those of the Luqs bloodline. It is a burgeoning empire maintained by the combined efforts of the standing military force and the Talents of the Halls of Law. While the military preserves and protects, it is the Halls’ Talents—those gifted from birth with magical abilities—who serve as the agents and judges of the Law. For no one can successfully lie to a Talent. Not only can they read people by the briefest of physical contacts, but they can also read objects, able to find information about anyone who has ever come into direct contact with that object. Thanks to the Talents and the career military, the Polity has long remained a stable and successful society. But all that is about to change.

Seventeen-year-old Kerida Nast has always wanted a career in the military, just like the rest of her family. So when her Talent is discovered, and she knows she’ll have to spend the rest of her life as a psychic for the Halls of Law, Ker isn’t happy about it. Anyone entering the Halls must give up all personal connection with the outside world, losing their family and friends permanently. Just as Kerida is beginning to reconcile herself to her new role, the Polity is invaded by strangers from Halia, who begin a systematic campaign of destruction against the Halls, killing every last Talent they can find.

Kerida manages to escape, falling in with Tel Cursar, a young soldier fleeing the battle, which saw the deaths of the royal family. Having no obvious heir to the throne, no new ruler to rally behind, the military leaders will be divided, unable to act quickly enough to save the empire. And with the Halls being burned to the ground, and the Talents slaughtered, the Rule of Law will be shattered.

To avoid the invaders, Kerida and Tel are forced to enter old mining tunnels in a desperate attempt to carry word of the invaders to Halls and military posts that have not yet been attacked. But the tunnels hide a dangerous secret, a long-hidden colony of Feelers—paranormal outcasts shut away from the world for so long they are considered mythical. These traditional enemies of the Halls of Law welcome Kerida, believing she fulfills a Prophecy they were given centuries before by the lost race of griffins. With the help of these new allies, Kerida and Tel stand a chance of outdistancing the invaders and reaching their own troops. However, that is only the start of what will become a frantic mission to learn whether any heir to the throne remains, no matter how distant in the bloodline. Should they discover such a person, they will have to find the heir before the Halian invaders do. For if the Halians capture the future Luqs, it will spell the end of the Faraman Polity and the Rule of Law.