It is a fact that Black Gate photog Chris Z and I spend just about every free moment of every September, getting pre-opening night looks at all the haunted attractions within a 50-mile radius of Chicago. It is also a fact that doing so makes the two of us the absolute worst people to ever take with you to a haunted attraction in the month of October.

Because by then our cynicism and snark have reached their annual pinnacle, fueled by countless hours of walking through dimly lit corridors while the great, the good and the truly awful professional haunters (there’s very little in between) take their best shot in exchange for a bit of free press. In other words, we’re the perfect people to utterly torpedo your willing suspension of disbelief.

Therefore, it’s no surprise that we, or more specifically I, long for a bit edgier October experience. It was way back in 2012 that I first discovered Blackout, which at the time was only in NYC but has since created a traveling version that came through Chicago. Either way, Chris Z adamantly declined to join me, saying he could think of far better ways to spend $135 then attending an event requiring him to sign a 30-page injury waiver.

If you’re not familiar with Blackout, its creators call it “immersive theater.” People sign a waiver absolving Blackout from any responsibility, and walk through a darkened space where… things happen. Violent things. Sexual things. Degrading things. Things that take it far from the realm of “Oh look, there’s a guy with a Freddy Krueger glove,” and into the territory of “This place has a safe word policy and if you suffer from PTSD you probably shouldn’t go.”

There weren’t many detailed explanations of what goes on at Blackout, making me wonder if a non-disclosure was part of that waiver you sign. But I found a couple of good explanations that made me believe that, though Blackout certainly pushed the limits, it would still be do-able if you weren’t easily scared, or skeeved out, or squeamish… at all.

But that was then, and this is now… and in 2017 everything seems to have gotten more extreme. 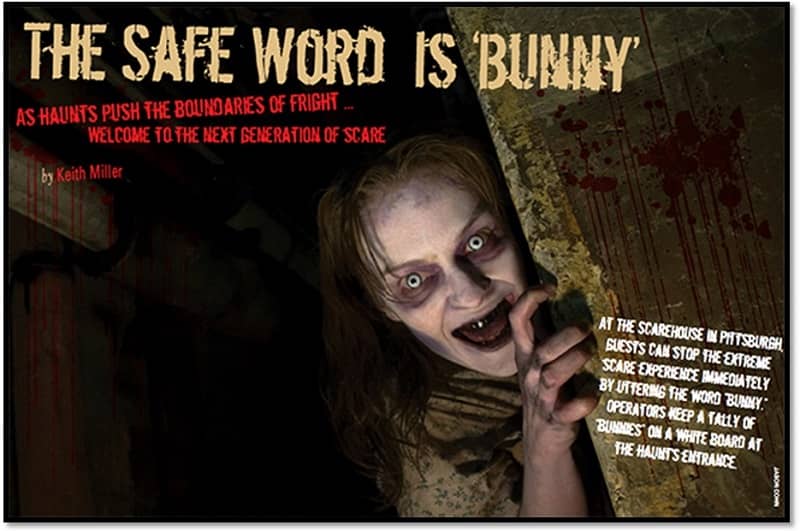 You see, Blackout apparently started something which some people thought needed amping up; or so I learned while perusing one of my favorite entertainment sites, CanYouActually.com. They observed this newest scare phenomena and did an article on it called 5 Of the Most Extreme and Disturbing Haunted Houses On the Planet which prompted me to look into each and every one of them. I’m not really sure what to think of this whole thing, mainly because getting scared — whether at the movies or attending an October event — is a safe version of escapism. I mean, the chance of zombies actually chasing you is relatively low in real life.

But these new establishments are reenacting real violence… inflicting real violence on willing participants. And that, like the movies I call “sociopath training films,” is too close to news headlines to be entertainment, at least for me.

I can’t believe I’m actually going to say this, but Chris Z. may have a point.

Still, these new extreme experiences have vehement supporters, some who return multiple times in attempts to beat their “personal bests” of facing-their-fears endurance. They come from all walks of life and appear, at least on the surface, pretty normal. You have to admire it…or at least wonder about it…or…whatever.

So here are the five most extreme events with a little blurb about each. The real information is at each link but don’t open them in front of your boss, or your kids, or anyone probably.

The most realistic, traumatic, and horrifying test of psychological fortitude currently being offered in the United States. You’re not the voyeur; you’re the victim. Things HAPPEN to you. Do you have what it takes? We don’t think so.

Haunted Hoochie offers patrons a “full sensory assault.” They take you by the throat and drag you down their rabbit hole of horrors that’ll get your heart pounding. The haunted house contains graphic and violent horrors. These images may be too offensive and disturbing to some.

Blackout is back and are also kicking it up a few hundred notches in 2017 with a new theme that is part escape room, part…I’m not sure. But just take a gander at this NSFW article from Vice. Seriously, wtf…

From wtf all the way to the outer stratosphere of “I have no words.” This is so over the top that it has passed out of “horror experience” and into its own category called “horror survival”. If you want an idea of what Russ McKamey is dishing, the Manor has its own YouTube channel but again, NSFW (in extra-large caps). If this wasn’t weird enough, this is the only experience that is free with a donation of dog food and pet supplies (Russ is a real softy, animal lover); meaning chances are, all the people inflicting this madness on you are doing it for the sheer fun. 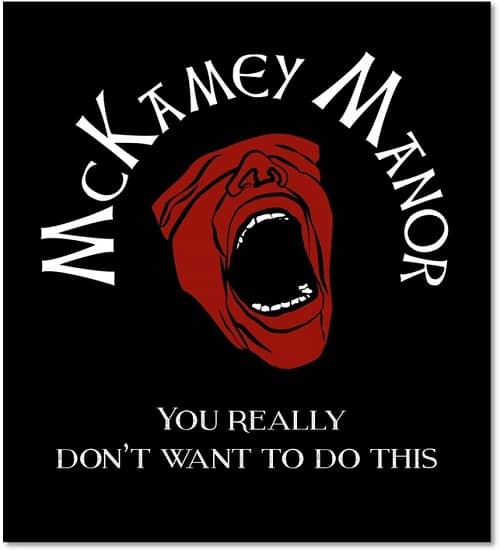 So, in less than a month its back to the gauntlet of Chicago area fright fests. It might get taxing after a few weeks, but no one has ever tried to waterboard us, at least not yet.

Ok Black Gaters, I know you have an opinion on this one. Liberating adrenaline rush or sick fantasy indulgence? Better yet, have you actually participated?? Let us know what you think but let’s try not to get me reprimanded by the Big Cheese ok? Thanks.