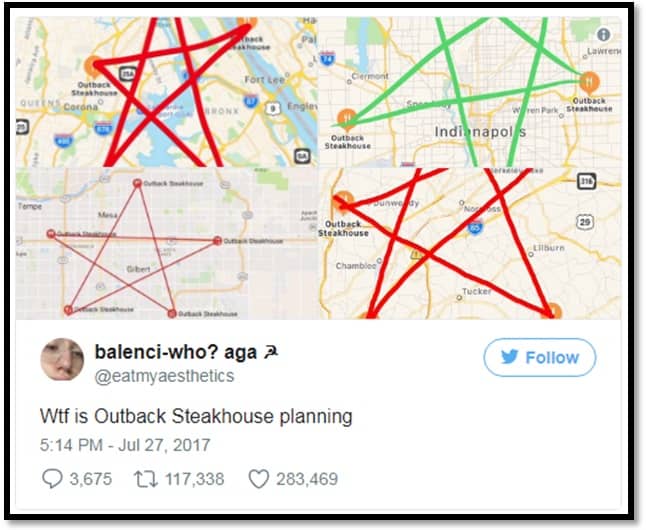 I have somewhat of a love / hate relationship with conspiracy theories. Love them for the creative ways some people manage to find patterns in chaos, and hate them because those same people hear hoof beats outside a window and immediately think it’s a zebra – no matter what.

But I must admit, I love this latest theory which has been burning up the Internet since late last week; that the Illuminati, or maybe Satan’s minions are working against humanity, or at least laundering money, through Outback Steakhouse.

It started with one observant Twitter user who, for whatever reason, mapped the Outback Steakhouses first in his vicinity, then in other major cities and noticed a somewhat disturbing pattern in the restaurants’ locations.

The tweet above quickly went viral and the story was picked up by Business Insider a few days later. Though one would like to believe the onslaught that followed as all done with tongue firmly planted in cheek, the responses either saw it as definitive proof that a significant Illuminati investment property had been unmasked or attributed the configuration Satanist ownership in the chain.

Come on people, did no one read The Davinci Code?

Still, the Twitterverse had a field day. Others began to do their own investigating and users in Cincinnati, North Carolina, and Virginia made their own comparisons. 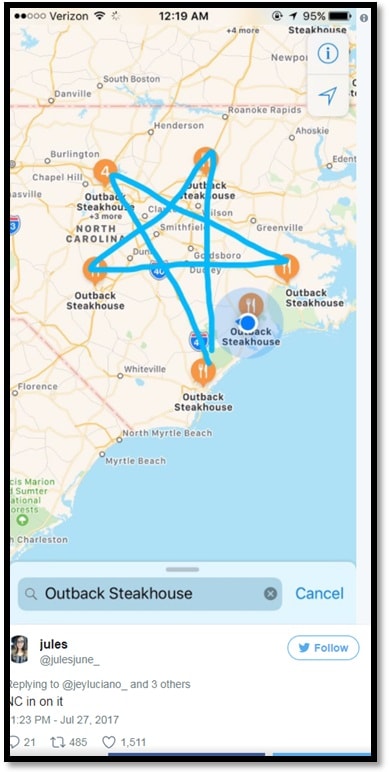 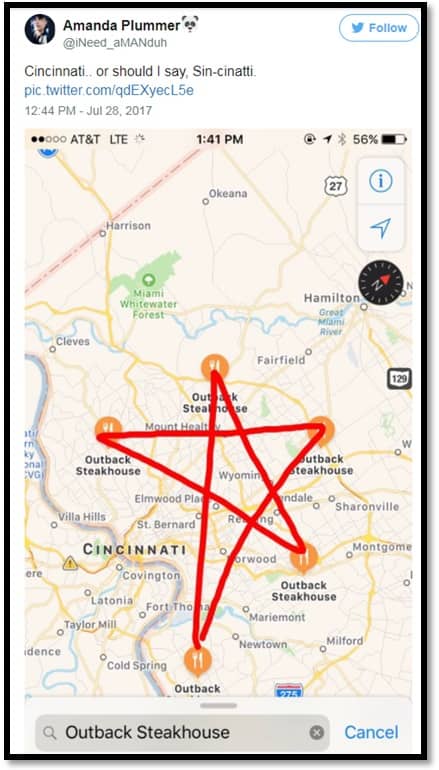 The non-supernatural explanation may be that the chain likes to build their restaurants outside major cities, but others think they have more nefarious reasons.

“Nah we’re on to you devil restaurant,” said one user.

“Wth is going on here @Outback we need answers,” said another.

Another asks, “Who knew when they said “a taste from down under”, they meant hell.”

Aside from the general absurdity of linking the “Bloomin’ Onion” with Satan, it should be noted how many users went out of their way to draw the pentagram—in some cases omitting nearby locations to link Outback restaurants miles away in order to make the connection. 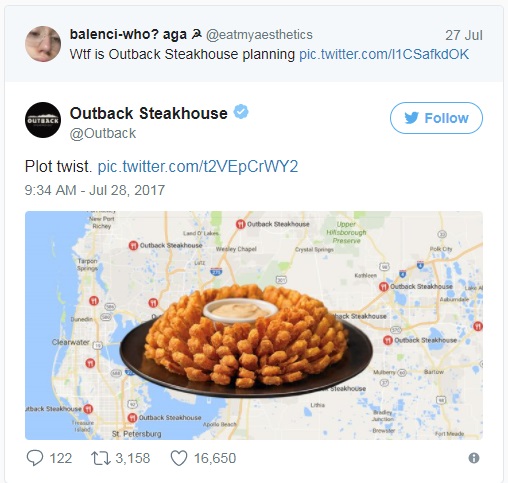 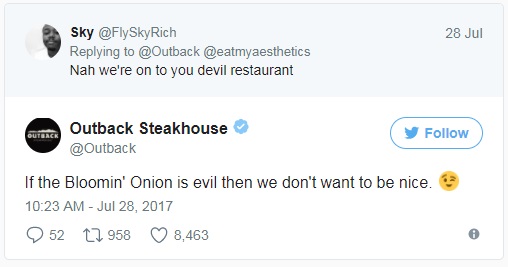 As the pop culture site Complex pointed out:

This might be the most free promotion Outback Steakhouse has received since Season 6 of 30 Rock when the “Idiots Are People Three!/The Ballad Of Kenneth Parcell,” episode found Jane Krakowski’s Jenna Maroney character staging a fake paparazzi photo opportunity outside of a local Outback.

We now return you to your regularly scheduled absurdities…

For all the conspiracy theories out there – there is “The Conspiracy”. So secret, vast, vital that all other Conspiracies pay homage to it. The Bilderbergers, the Rothschilds, the Illuminati, The Reptilian Overlords, The Learned Elders of Zion – even the Girl Scouts… All pay homage to “The Conspiracy”…

So, what is “The Conspiracy”?

Well, it’s simply that a real conspiracy fears exposure. And with today’s internet and obsessive lonely people, some of them don’t just waste their time and talents filling their home with Star Trek or My Little Pony toys and might try to do some good. Exposure can happen any time, without warning, and be spread across the world by anyone. Thus “The Conspiracy” comes in and creates an air of mockery around any who try to expose the truth. The guy calling in the talk show saying Martians have robotic animals that spy on him but when he cuts them open their radio waves make him think he sees blood and guts is somehow equal to the man who goes “I did the math on these three so-called-competing phone companies – they all have the same plan, the same costs and tons of room for hidden costs – let’s all call the Feds for criminal financial conspiracy…” Matter of fact the latter gets more ridicule and less attention and possible real retaliation.

And there have been plenty of proven conspiracies a quick google search away.
Ketchup companies making one or two bottles out of a hundred slightly less full to make (by fraud) hundreds of thousands of dollars, even millions. Automotive companies buying up public transport and lobotomizing it and influencing zoning laws to force a population spread out over a large area with no public transport forcing ownership of a car… Tobacco companies knowing full well how dangerous their products are but actually making them more addictive… Dot dot dot dot

The ultimate weakness of a Conspiracy Theory on the grand scale is that it is if anything too flattering. The conspiracies I named knowing it was public record aren’t Reptiles sucking blood (but you tasssteesss sooo goodsss huuumannnn), the Elders of Zion (What? Hallp us! Anti Semitism! We have done nothing! Hallp us!) or the Girl Scouts… (We noticed you didn’t buy any of our cookies this year…want us to kick your kneecaps!?) No, just plan, stupid and boring short sighted greed and evil. If the world is being messed up because of Reptile Overlords, etc. well scary and oppressive as it is it is exciting at least, has meaning.

If it’s just short sighted greed and apathy from the public…well isn’t it pathetic?

On the other hand, Conspiracy Theories are also good.

They turn things into “Good guys and Bad Guys” – and in the hands of a bard – or in modern terms a writer/storyteller…?