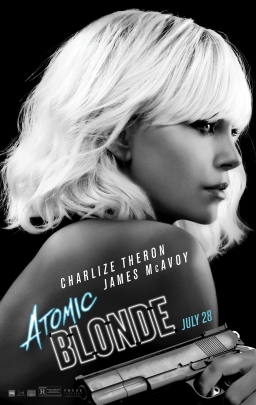 I’ve been swamped by movies since the 2017 Fantasia International Film Festival began, and that’s left me with no time to write about the things I’ve seen. It looks like those reviews will start coming next week, after the festival ends. But on Wednesday I saw a movie that’s getting a wide release this weekend, and on the off chance what I have to say might be useful to anybody trying to plan their weekend, I thought I’d abandon my usual diary format to say a few words about Atomic Blonde.

The movie’s officially the directorial debut of longtime stunt coordinator David Leitch, who also directed some of the scenes in John Wick. He’s working here with a script from Kurt Johnstad, who wrote (among other things) the screenplays for 300 and 300: Rise of an Empire. This is another comic adaptation, based on The Coldest City, a 180-page graphic novel written by Antony Johnston, drawn by Sam Hart, and published in 2012 by Oni Press; a prequel, Dead of Winter, came out last year with art by Steven Perkins.

Atomic Blonde is set in November, 1989, as MI6 agent Lorraine Broughton (Charlize Theron) is sent to Berlin to get an East German defector across to the West, and recover a list of double agents. She also has to investigate the recent murder of another British agent, and work out how much she can trust the British station chief in Berlin, the manic David Percival (James McAvoy). This isn’t an espionage thriller, though, not really. This is an action film, and the violence starts early and recurs often as Broughton goes about her mission. Does the whole thing work?

Yes and no. I found the action scenes were strong and inventive. The clear highlight is an extended long-take fight scene in the middle of the movie that moves from brutal to comic and back again. Like a lot of the fights, there’s an engaging mix of martial-arts fluidity, improvised weapons, gunplay, and unexpected reversals. Punches and kicks land with satisfying weight, if not consequence. Theron’s Broughton wears more and more of the marks of her combats as the film goes along, but these bruises and scars merely nod faintly toward reality. This is an action movie, and there’s a slickness to the action that keeps it engaging, if rarely at the level of the one-take set-piece. You don’t care about the plausibility of Theron fighting in high heels because she’s visually coded as very nearly a super-hero: always in immaculate black-and-white costumes (rarely grey in non-fighting sequences), always lit and framed as the larger-than-life lead. 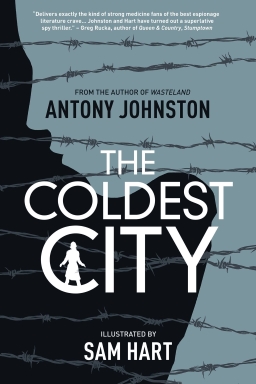 That’s actually most of the characterisation we get of her through much of the movie. A lot of her motivation only becomes clear at the very end, which is fair enough; the movie’s theoretically narrated by her, told in retrospect through the framing device of a debriefing session after her mission’s over. I would say that the explanation of her character isn’t as revelatory in purely character terms as one might have hoped. More specifically, finding out what she’s after doesn’t really lead to a re-assessment of what was really happening all along in the film. We realise why a few things went one way instead of another, perhaps. But the basic idea of who she is doesn’t affect the plot much — which may be an issue, because if this movie’s about anything other than action, it’s a le Carré–esque meditation on trust and morality in the grey world of espionage.

In that sense, the black-and-white wardrobe might be understood as a contrast to the nature of spycraft; it certainly stands out in a way I wouldn’t have thought to be desirable. One might also argue that Theron, studiously underplaying Broughton all through the movie, is reflecting the detached professionalism of a veteran spy. It strikes me that it’ll be interesting to see whether there are different reactions among men and women to this film, and specifically how audiences identify with (or project themselves into) a blank slate that happens to be a woman as opposed to the more usual male tabula rasa.

In any event, the problems here are really the things that aren’t action, as well as many of the actors who aren’t Charlize Theron. The intrigue element isn’t very strong, in terms of shaping the ways the characters behave. The dialogue has some clever lines, but also some points of incoherence, and of straining for unearned gravitas. Above all, the plot falls apart the more you think about it — the final revelations of the film lead one to wonder why certain characters in possession of certain knowledge had made the choices they did and trusted the people they did. The film’s aiming at The Usual Suspects in its tale-telling structure, but does clumsily what does movie does deftly.

Most of this doesn’t affect the slickness of the action scenes, but I did have a sense that the movie missed an opportunity in the way it built a sense of time and place. Or, I suppose, the way it didn’t. Although the film takes care to show a number of Berlin landmarks, and although it uses a carefully-curated soundtrack of 80s pop hits (I know four German new wave songs and three of them are in this movie), the setting never comes alive in a meaningful way. There’s no sense of life to this Berlin, no sense of what the moment means. No sense of the city as a place where people live their own lives, only a sense of a backdrop against which other people have adventures. 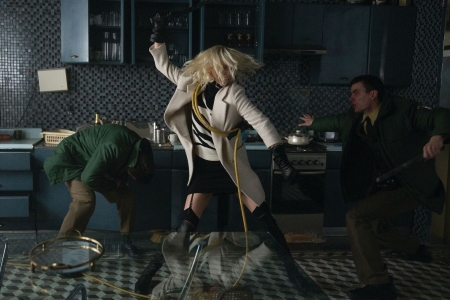 For all that the movie’s ostensibly dealing with the cold war, it doesn’t have any obvious interest in the actual reality of 1989. As characters race around trying to find the only copy of a printed list, one wants to gently remind the filmmakers that we had computers even back in the eighties (we used them to play Global Thermonuclear Warfare, and occasionally a nice game of chess). Much more seriously, Broughton has a lesbian relationship with another spy in the movie, and as far as I can tell, this is meant as a real emotional connection, not a deception; so it’s unfortunate that the film never mentions that in 1989 lesbians were still banned from working for MI6. Even an offhand mention that Broughton was concealing her sexuality from her superiors would give some interesting depth to the character and her interactions with her superiors. But I didn’t notice anything of the kind brought up, and it’s hard not to feel like the Hollywood tendency to streamline the past into something comprehensible to the present is at work here. (Interestingly, given some of the other plot points in the film, the CIA had cleared lesbians for duty in 1988.)

It has to be said that this isn’t a movie deeply concerned with reality. McAvoy’s David Percival is utterly unbelievable as a major espionage agent, for example, and to judge by this movie, MI6 never had more than two agents in Berlin at the same time. This is a Hollywood movie, where even decaying communist architecture has a picturesque sheen. It’s a movie concerned with action and with looking sharp, which things it mostly manages satisfactorily. Credibility isn’t a concern. 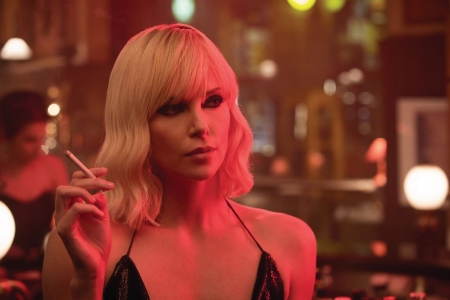 This does in theory undercut the drama, and the themes the movie’s theoretically about. We’re a long way from le Carré or Graham Greene, even if the movie’s nominally to do with the kind of moral rot and loss of identity that comes with the practices of the espionage world. But then, the movie isn’t really about any of that. It’s about bravura action scenes and fight choreography; this isn’t a movie that knows how to show rot, or for that matter greyness, and ultimately isn’t really interested in those things. It’s a confection that moves quickly, and if that’s what you want, you’ll be duly if not necessarily wholly entertained.

Few things depress me (cinematically, anyway) more than the shallowness of contemporary action films, even as I confess to enjoying some of them, like Dredd and John Wick. My enjoyment is on such a shallow level, though, because that’s the only level these films make available to me. In even the best of these movies nothing is at stake, peopled as they are by cartoons, caricatures, and (as you say) superheroes living in worlds utterly divorced from any kind of social or political or historical reality. Their violence doesn’t really disturb me, because without a human context violence is just movement, and a human context is just what these movies lack.

Compare the current crop with a film like Sam Peckinpah’s The Wild Bunch and the difference is enormous. The long, brilliant action sequence – the greatest in the history of film, I would argue – at the center of the movie (the train robbery, beginning with the taking of the train and ending with the dynamiting of the bridge) really matters, because it has genuine consequences in the lives of the characters and in the three dimensional world that Peckinpah created for them – not just physical consequences, but emotional and moral ones.

The difference, I guess, is between art for adults and candy for children. I like candy now and then, but a stead diet of it? Increasingly, it seems, that’s all that can be found on the shelves.

Yes, that was a very helpful review. Thank you.

Sounds like the best way to enjoy Atomic Blonde may be as an impetus to rewatch the original French La Femme Nikita. Bravura action scenes, smart dialogue, stunning performances, and thoroughly earned gravitas in that old jewel.

Thanks for the comments! (And my apologies for a belated response.)

Thomas, I will cop to not having seen The Wild Bunch, but I can easily agree this movie doesn’t stand up to what Peckinpah I’ve seen. But in fairness, the same year The Wild Bunch came out, so did On Her Majesty’s Secret Service and Where Eagles Dare. Those movies are maybe a bit closer to Atomic Blonde. Which I understand doesn’t help much; I guess I’m saying that candy has always been part of Hollywood. I certainly agree it’s harder to find something Peckinpah-like these days. For whatever reason, the first things to come to mind are the Vengeance trilogy, though even those are a dozen years old now.

Sarah: I have to admit I also never saw La Femme Nikita, one of a number of Besson movies I’d like to see. I will also cop to feeling old, now, as I was in college when it came out and I hadn’t realised how long ago it was. Oh well.