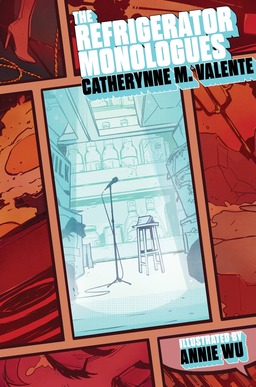 The Wonder Woman movie has received considerable buzz for depicting an interesting lead female character who actually has a personality, is not dependent on some guy to come to her rescue and truly is the star attraction; it even has a female director. It’s enough to make you forgive the silly and at this point yawn inducing CGI pyrotechnics between good and evil ending that is apparently sacrosanct in these sort of flicks. Look, I enjoyed the movie, but for all its merits it’s still a sad commentary of our times that Wonder Woman is considered somehow ground breaking. Problem is, compared to the latest crop of superhero movies (maybe even movies in general) the bar isn’t set very high.

You want some real kick-ass female perspective on the comic book world that’s disturbingly close to real-life? Check out The Refrigerator Monologues by Catherynne M. Valente. This is a series of short stories set in shared alternate comic book universe (with characters such as Grimdark and Kid Mercury and Doctor Nocturne evoking various Marvel and DC Comics personages) linked by a sort of AA session in which deceased women (with one exception who for her own reasons hangs out among the unliving) take turns explaining how they ended up in Deadtown, i.e., thanks to some male superhero or supervillian exploit.

The title of the collection is a take-off of The Vagina Monologues — the Eve Ensler play about sex and body image told from the perspectives of a variety of women representing different ethnic, sexual and class identities — and comic book writer Gail Simone’s observation that comic book women are typically hypersexualized for a male audience and often end up “refrigerated” — killed, disabled, or otherwise rendered marginalized or powerless in order to advance a male character’s storyline. Indeed, in “Happy Birthday, Samantha Dane” the title character literally ends up in a refrigerator. (And, by the way, is just one of many great comic book kind of names that Valente invents for her cast of characters. Also by the way, it’s worth noting that in Wonder Woman a male character dies to advance our heroine’s story — perhaps an intentional inversion of the refrigerator motif?)

Even if you’re not into the whole superhero thing, The Refrigerator Monologues is, alas, particularly pertinent in this era of the Groper-in-Chief. (“What’s the difference between being dead and having a boyfriend,” jokes Paige Embry to her fellow members of the Hell Hath Club out for the night at the Lethe Cafe. “Death sticks around.”) Read it for the “smack you in the face for the way things really are” smart-ass prose like this:

I know what you’ve heard about Atlantis. But it’s not what you think. There’s no perfect towers, no vending machines packed with enlightenment in a can, no visions of techno-utopian sugarplum dancing in the street… You think of an underwater city and your brain spins up all these postcards of clean turquoise water and whitecaps and frolicking orcas off a Lisa Frank notebook. But the ocean isn’t like that. It’s full of salt and sewage and tanker oil and mud and dead dolphins and fish poop and about a billion and four jellyfish. We don’t live in Atlantis because it’s a pristine paradise. We live there because we’re weird, gross aliens and Brooklyn’s full.

So, instead of going out tonight and seeing the latest set of superhero cliches (I hear the new Spider-Man isn’t bad, but isn’t this already the third time they’re telling the same story again?), read this book. It’s a hell of a lot more interesting and, better yet, gives you a lot to think about.

The idea of an afterlife support group for dead girlfriends of superheroes is so darkly hilarious, it’s hard to imagine how it could fail to entertain. Put that idea in Valente’s head, and you really can’t go wrong. I am absolutely going to read this.

I had high hopes for The Refrigerator Monologues, but I am deeply disappointed with it. This is Valente at her least imaginative (compare to her amazing Radiance).

I deleted a comment by GreenGestalt that took this conversation off track (and wasn’t completely coherent.)

Let’s keep this thread focused on Cat Valente and The Refrigerator Monologues. Thank you.