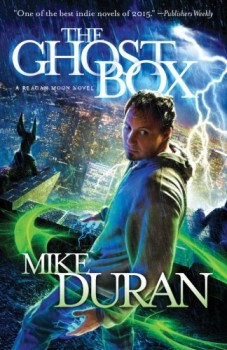 I’d like to keep the monthly schedule going, so please keep sending me books to review — see the instructions here.

Reagan Moon is a paranormal reporter working for the Blue Crescent, an LA tabloid. He’s good at his job, and one of the things that makes him so good is he doesn’t believe. Oh sure, there are strange things out there: cults and designer drugs and brain hacks, but nothing supernatural. Nothing that can’t be explained. He hasn’t believed in much since his dad died, and his girlfriend’s, Ellie’s, death less than a year ago only made him more of a cynic.

But tabloids don’t pay a whole lot, and if a rich eccentric wants to pay him to talk to a medium, he’s game. The problem is that Klammer wants him to make contact with Ellie, hinting that she wasn’t incinerated in a freak accident but rather harvested for some grotesque purpose. In grand noir tradition, Reagan is soon dodging the police on suspicion of being involved in the death of said medium. Whether holed up with the Mad Spaniard and his daughters, Kanya and Cricket, in their Asylum for strange artifacts, or following a lead to the Spiraplex, a grand building/science experiment centered around a giant statue of Anubis, and built by Klammer’s old business partner and rival, Soren Volden, Reagan is constantly in over his head.

The Ghost Box is the first book in Mike Duran’s Reagan Moon series. I reviewed the second book, Saint Death, last year, but I figured I should go back and cover the first one. Mike Duran started publishing in the Christian market, writing novels such as The Resurrection and The Telling, both of which contained supernatural elements that don’t neatly fit Christian theology, for which he received blow back from many readers of Christian fiction. The Ghost Box is an effort to get outside the narrow restrictions that limit what he can do in Christian publishing. Mike Duran doesn’t hide his Christian worldview, but neither is he pushy about it.

In fact, it’s clear that Reagan Moon is not a believer in pretty much anything. And there’s no conversion experience in this book. Or rather, it’s not a conversion to Christianity so much as a conversion to hope, an acknowledgment that there’s more to this world than the physical, that our spirits do survive after death.

Of course, to get there, Reagan Moon first has to see it with his own eyes. Enter Rival’s Curtain.

Rival’s Curtain looks like aviator goggles with amber crystal lenses. What it actually does is reveal the world of the Invisibles. Most people can only look through Rival’s Curtain for a few minutes without getting physically ill, but Reagan takes to them naturally. And once he sees what’s on the other side, he can’t go back to his comfortable cynicism again. Not only are there ghost currents moving through the air, but there are whole worlds, occupied by such beings as the fiery-mouthed, many-limbed cytomorph and a burnished angel whom Reagan nicknames Bernard. In Rival’s Curtain, most ordinary objects are dimmed, but people can glow, or be ridden by demons, or be revealed to be something not even remotely human. And some objects are revealed to be not so ordinary, such as the Tau, an oddly shaped cross which Ellie gave him, along with the mandate to protect it. Through Rival’s Curtain, it crackles with electricity.

The Tau is the key to what’s happening, as Soren Volden’s minions try numerous times to recover it. Bernard guides Reagan and Kanya to the Volden’s Spiraplex, where they learn the truth about Ellie’s death and the Lovecraftian horrors her murderer intends to release.

Reagan is not a typical hero. He’s not particularly brave or bold, and he has an annoying tendency to freeze up or gawk when he encounters something strange.  In the beginning, at least, he doesn’t really believe in anything, and it takes some effort — and money — to get him moving. Ultimately, it’s Ellie that gets him motivated, the desire to first learn the truth of what happened, and then to do something about those responsible. It’s pretty late in the game where he begins to grasp that maybe he has a larger responsibility, that those behind Ellie’s death may be a threat to the entire world, and that somehow he’s the only one equipped to stop them.

By the end of the novel, though, he’s changed. Oh, he’s still not particularly bold, and he’s a long way from knowing what to do with the gifts he’s been given, but he’s started to see the world in a new way, and accept things which he did not acknowledge before. He’s not ready, but he’s no longer hiding either.