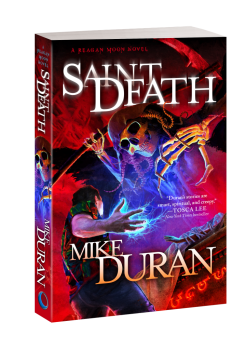 Disclosure: Mike Duran edited a story of mine for Coach’s Midnight Diner once. I’m also Facebook friends with him, and got to know him a little in person at a con last year. I think I can still be objective in reviewing his novel.

Saint Death is the second in Mike Duran’s paranormal noir Reagan Moon series. I’ve read a number of his stories before, from the religious supernatural fiction of The Resurrection and The Telling, to the more bizarre stories like Winterland. But his self-published Reagan Moon novels are where Mike seems to have hit his stride. Or perhaps, they’re more along the lines of the type of fiction I like to read.

Paranormal reporter (or paparazzi, as some people call him) Reagan Moon has been hunting ghosts all his career, but he never really believed in them until he had an undeniable experience with the supernatural in The Ghost Box. At the climax of that adventure, Reagan was struck by lightning, and the odd, perhaps supernatural, cross-like Tau that he wore was fused with his chest, preserving its shape in a Lichtenberg figure. The lightning also gave him what he calls stormgifts, such as a strange intuition, a limited ability to heal others, and most weirdly, the ability to teleport—except the teleporting is more like moving between worlds, and punching a hole through anything standing in the way in this one. But using the stormgifts is hard, requiring an effort of focus and will that are difficult for Reagan to summon, and each time he uses them, the Tau scar seems to grow.

Reagan’s troubles take on a supernatural aspect again when a tip from his patron, and fellow gifted, Klammer, sends him to an LA ranch to look for someone called the Shroud. There he finds a Santa Muerte shrine, a wannabe vampire, and a cult priestess named Etherea, threatening to summon the archangel of death for another go at the Tenth Plague of Egypt, the killing of the firstborn. Fortunately, Reagan is assisted by his guardian angel Bernard, his shapeshifting almost-girlfriend Kanya, and the members of the Imperia, an eclectic collection of fellow gifted, whose abilities are consuming their bodies just as Reagan’s is.

Mike Duran’s LA is a lot like ours, just a lot crazier. The drug lerium is giving people psychic powers, there are real lizard people, and most of what you read in the tabloid papers is true. It’s possible to mistake that world for ours if you regard these things to be rumors and innuendo, but Reagan’s no longer able to.

Reagan Moon is a skeptic and a cynic, and as the first person narrator it’s his personality that ably carries the novel. While the things he’s experienced are making it harder for him to disbelieve, he still doesn’t accept everything he’s told: about angels, about the Imperia, about the Lizard People. And where his doubts about the facts end, his doubts about people begin. It’s a necessary perspective on a world as crazy as this one, and helps the reader toward accepting the reality of the situation, and that these damaged people can be heroes.

Kanya is Reagan’s co-star, and while she doesn’t share Reagan’s cynicism, she has her own problems. Including the deadly, little girl alter-ego Cricket who threatens to take over when the mother who surrendered her as a child to the Summu Nura—otherworldly beings from a lower dimension—shows up.

Magic in Mike Duran’s world has a different texture than what you usually see. To a large degree, this reflects his background in religious fiction, where magic is not usually a good thing, and there’s a reluctance to even call it magic–the Imperia tend to regard their abilities more as Heavenly gifts. But even if they’re miraculous, they’re not miracles, and the Imperia pay a high price for their power. They are damaged people, physically and emotionally. Everyone loses something when they use their powers, whether it’s their legs, their eyes, or their memories. Supernatural power is always hard for them to use, costly and terribly slow and difficult to set up in a crisis. There are times when a gun would simply work better, but when a gun won’t work, the powers are needed. For that reason, they see their powers as gifts instead of curses, but Reagan’s not so sure.

For the bad guys, such as Etherea, the price for magic is in dealing with darker creatures such as the Summu Nura, and paying them with the blood of others. Their magic doesn’t seem at all hindered by the doubts which handicap the good guys. The price they pay is more of the soul than of the body.

Some might find Mike Duran’s handling of the Santa Muerte folk religion troubling. Since in his book it’s used as a front for summoning the archangel of death, he tends to play up the darker aspects, such as its association with drug dealers and criminals. This is not at all an even-handed approach, or an attempt to treat the religion fairly. But focusing on the darker aspects of religion has long been a useful tool for horror writers. And while this book is not strictly horror, Mike shows his horror roots in his disturbing and chilling descriptions—from death angels to whetherweres to poltergeists, they’re portrayed in loving and terrifying detail.

Fair warning, there are some spoilers in the paragraph below.

The novel is quick paced, with Reagan moving from crisis to worse crisis with the regularity of a metronome, or at least the chapter breaks. Saint Death manages to keep the pressure up from the beginning to the end. However, where I felt the book was most lacking was in the plot twists that are so important to the paranormal noir genre. There were surprises and twists, sure, but they were of the standard adventure variety. There was no revelation near the end that fundamentally changed how the reader viewed the entire story so far. How much you miss this element may depend on how much you enjoy the paranormal noir genre, such as the moment in the Dresden files where things click and Harry realizes what’s really going on. This is not necessary in every novel, or even every novel of this genre, but I definitely felt the lack here.

In spite of the occasional invocation of cosmic horrors, Mike Duran’s view is essentially hopeful, closer to Dean Koontz than H.P. Lovecraft. Some people find this refreshing, others find it annoying. How much you enjoy this novel will depend to a large degree on where you stand.