Tor.com Publishing has had some stellar successes recently. Nnedi Okorafor’s Binti won both the Nebula Award and Hugo Award for Best Novella, and this year the line received six Nebula nominations and five Hugo nods… pretty extravagant results for a publishing imprint that’s not even two years old.

Seanan McGuire’s Every Heart a Doorway, published by Tor.com last April, received both a Hugo and a Nebula nomination this year, and just last week it won the Nebula Award for Best Novella. In her BG review last year, Elizabeth Cady said:

A departure from McGuire’s usual fare, Every Heart a Doorway is a bittersweet twist on conventional fantasy that neither shies from more dwells on the darker side of our encounters with the fantastic…

Out in the countryside exists a boarding school for unusual children… Each student at Eleanor West’s School for Wayward Children has accidentally stumbled into an otherworld and then returned home to find themselves so changed that they can no longer fit in at home. Some of them are heartbroken at being kicked out of paradise. Some of them are traumatized by what they experienced there. Most of them hope to return to their individual worlds, somehow, by finding their Door again.

We find our own Door into this school through Nancy, a young woman who has just returned from one of several Lands of the Dead. Shortly after her arrival, another student is found dead and Nancy, along with her newly made friends, must find the killer before the school is closed or they become the next victims… I was very pleasantly surprised by this little gem of a book. 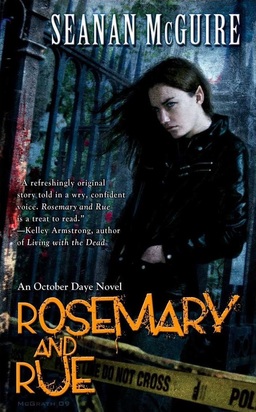 Tor.com has announced two more releases in what’s now being called the Wayward Children trilogy. The next one, Down Among the Sticks and Bones, arrives next month, and the advance reviews have very positive. Library Journal calls it “Beautifully crafted and smartly written, this fairy-tale novella is everything that speculative fiction readers look for: fantastical worlds, diverse characters, and prose that hits home with its emotional truths.”

The third volume has also been announced, Beneath the Sugar Sky, scheduled for release next year. Here’s the complete publishing details.

All three books are published by Tor.com, with cover designs by FORT.

Seanan McGuire is the author of the 10-volume October Daye urban fantasy novels (starting with Rosemary and Rue), as well as the InCryptid series (6 novels), and the new Indexing urban fantasy series (2 novels). Under the name Mira Grant, she’s also the author of the bestselling Newsflesh novels (4 volumes) and the Parasitology trilogy.

I knew nothing about Ms. McGuire until recently. I had hoped to attend last year’s Marcon in Columbus, where she was listed as the GoH, but had work-related activities and couldn’t. In the process of looking her up on Wikipedia, I discovered she also wrote as Mira Grant — and I’d gotten 100+ pages into “Feed” several years ago as preliminary to voting on that years Hugos (“Feed’ was a Best Novel nominee). Suddenly I see her name — both as M. Grant and S. McGuire — EVERYWHERE. She’s more visible than a Roger Elwood anthology was in the ’70s-’80s. I dug out my copy of “Feed,” got started again — and could not stop. Absolutely one of the best novels I’ve ever read, and that takes in over 3000 novels in 50+ years. An extremely competent, well-written work, and I haven’t been as impressed by a (to me) new writer in AGES. So, I decided to pick up “Every Heart a Doorway,” since I have Hugo voting privileges again this year — and once more, I was thoroughly enchanted, albeit in a much different fashion. I cannot recall when last a work of SF or Fantasy captured my imagination in such a way that I so desperately wished the world I’d been invited to share in truly existed. Lately my 3 twenty-something daughters and I have been revisiting Harry Potter (by way of DVD); we got up to no. 4 last week, and we were all as entranced and enchanted and heartbroken as we’d been the first time around, in print and on film. I’ve slowly been adding as much of Ms. McGuire’s work — under both names — as I can afford, and if any of the rest is as good as the 2 I’ve already read, I’m in for a treat. I can strongly recommend both “Feed” and “Every Heart a Doorway” — you WON’T be disappointed.

Thanks for the endorsement (and mini-review) smitty!