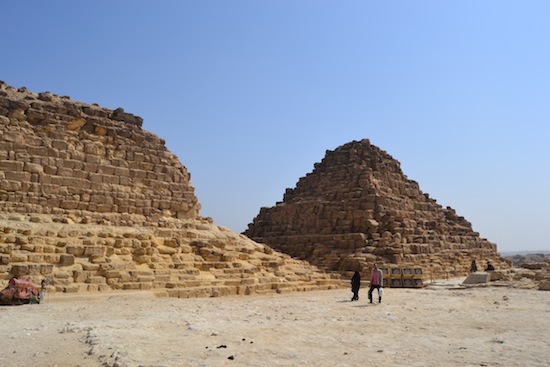 The two best preserved of the satellite pyramids of Khufu,
those of Meretites (left) and Henutsen (right)

Royal women played a prominent role in ancient Egyptian government right from the start. There may have even been a female pharaoh in the First Dynasty (3050-2890 BC) named Queen Mernaith (precise dates unknown). She appears to have been the mother of Den, the fourth pharaoh of the dynasty, and it’s unclear whether she ruled in her own right or as a regent for her son until he came of age. We do know for certain that the Second Dynasty (2890-2686 BC) pharaoh Nynetjer decreed that women could occupy the throne. In later dynasties, several did so.

The Queens’ Pyramids at Giza all belong to the Fourth Dynasty (2613-2498 BC), as do all the more visible monuments at Giza. The first pyramid built at Giza was the pyramid of Khufu (2589-2566 BC). On the eastern side you can see three pyramids for his wives. Two are now mostly collapsed. They appear to have had a slope of about 52 degrees (Khufu’s pyramid has a slope of 51.5 degrees) and rose to about 30 meters, or one-fifth the height of Khufu’s pyramid. All three had sloping shafts leading to the burial chamber, plus associated mortuary temples. Two had pits to hold boats for the deceased to use in the afterlife, but no trace of these boats has been found and the pits were divided into chambers, perhaps burial chambers, at a later date.

The northernmost and worst preserved of the three satellite pyramids probably belonged not to one of Khufu’s queens, but to his mother, Queen Hetepheres I, wife of Khufu’s father and predecessor, the pharaoh Snefru. It’s now little more than a heap of rubble. It’s estimated to have once stood 30 meters tall but now barely reaches 10 meters. The middle pyramid was probably for one of Khufu’s senior wives, Queen Meretites, although famed Egyptian researcher Zahi Hawass believes it was for another wife, Noubet, mother of the pharaoh Djedefre (2566-2558 BC). The southernmost pyramid is the best preserved. Some scholars believe it was the resting place of Queen Henutsen. The pyramid’s mortuary temple is the best preserved of the three and was reconstructed as late as the 26th dynasty (664-525 BC), when it was used as a temple of Isis, the goddess associated at that time with the entire pyramid complex.

In 1993 the remnants of a fourth satellite pyramid was discovered. Virtually all of the stone had been looted in antiquity, although the apex of the pyramid was found amid the remaining rubble. Scholars dispute the use of this pyramid and some believe it wasn’t a burial place at all but used for some sort of ritualistic purpose. 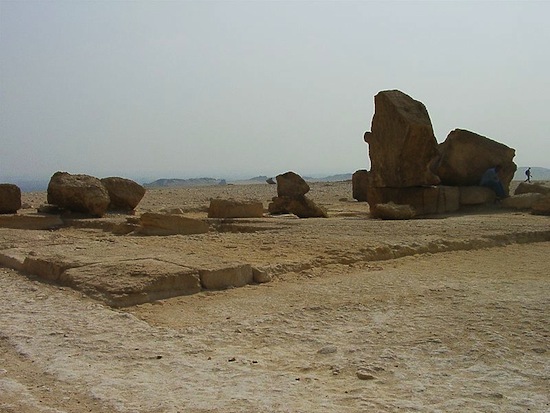 The satellite pyramid next to the pyramid of Khafre. Photo
courtesy Wikimedia Commons because for some reason
I forgot to take a photo of it when I was there. Compared
to the grandeur of the other pyramids, it’s easy to miss.
I wonder if that guy using it as a sunshade even
knows he’s sitting on a pyramid.

The second major pyramid at Giza was built by Khafre (2558-2532 BC) and has only one poorly preserved queen’s pyramid. Only the outline of the foundation and a few blocks remain, plus two descending shafts. Some fragments of furniture were found in one of the shafts, plus carnelian beads, animal bones, and covers for pottery vessels. The pyramid was surrounded by its own perimeter wall. Some scholars believe this was a cult pyramid and not a burial pyramid.

Menkaure’s pyramid is the smallest and latest of the three main pyramids has three satellite pyramids on its south side running in a line from east to west, all provided with their own small mortuary temples. The easternmost of Menkaure’s satellite pyramids was the largest and stood to an original height of 28.4 meters, and was the only one completed and provided with stone facing to cover the core. The other two never got this, which is why their four-stepped cores are so visible today. The easternmost pyramid may have been the resting place of Menkaure’s principal wife, Khamerernebti II, but many scholars doubt this. Like many other pyramids, it had a shaft sloping down to a burial chamber beneath the pyramid, but it was robbed long ago and its pink granite sarcophagus was empty.

The burial chamber beneath the middle pyramid contained the bones of a young woman in a pink granite sarcophagus, but no inscriptions remain to tell us who this was. The final pyramid’s burial chamber was completely empty and there’s no clue as to who was buried here. All three pyramids are enclosed as a group by a wall, making them somewhat separate from the pyramid of Menkaure. 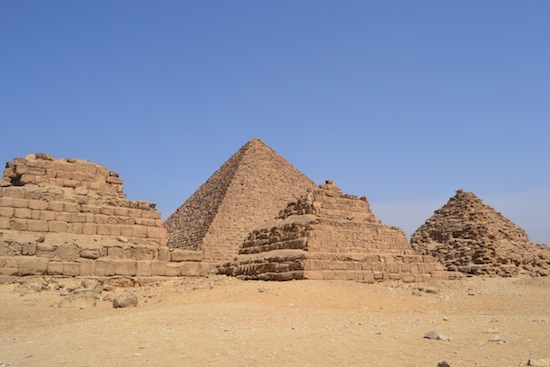 The Queens’ Pyramids were an integral part of the mortuary complex at Giza. They attracted mortuary cults who would worship at the associated temples for centuries, even millennia, after the queen died. While it’s been argued that some of these pyramids might have been cult pyramids and not burial sites at all, I doubt this on the grounds that all had burial shafts. The simplest argument seems the most likely–that the great Fourth Dynasty pharaohs honored their favorite wives with pyramids of their own. It was a rare honor. There were other pyramids for queens in other sites, such as Dashur, but most queens were buried in mastabas or later in the Valley of the Queens.

When I first visited Giza in 1991, I was intrigued by these little pyramids and noticed that one was in such poor condition that you could crawl between the stones. I can’t recall which one that was now. Thinking I might be able to worm my way into a central chamber, I pulled out my trusty flashlight and did an Indiana Jones imitation. Unfortunately I couldn’t get very far and had to come back out. As I stood back in the sunlight looking for a better entrance, an Egyptian man came up and said, “Don’t go in there.”

“Why not?” I asked, not telling him I already had.

“There are scorpions in there.”