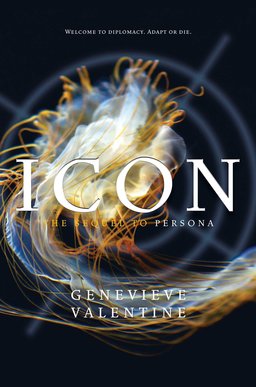 On my Top Ten Books from 2016, I mentioned Genevieve Valentine’s novel Persona, a near-future ecofiction novel set in a world where the UN has been replaced by the International Assembly, a body where each country has a Face to represent their interests and those Faces are regarded like Hollywood celebrities. The sequel to that novel, Icon, continues to follow Suyana Sapaki, representative of the United Amazon Rainforest Collective, as she navigates the dangerous politics of the IA, which almost claimed her life in the previous novel. (You may have spotted this one in a Future Treasures post by John O’Neill last June.)

I mentioned the last time I discussed Valentine’s work that her storytelling has a very unique feel to it. A lot of the plot is left to the reader’s interpretation, to the point that even though I had read Persona and recognized most of the returning characters, I spent a few chapters with my head cocked like some confused golden retriever, trying to figure out exactly what was going on. The subtleties that Suyana and her allies are forced to deal with in their world translates exactly onto the page, so if you prefer direct storytelling and obvious clarity, you might not enjoy this series.

What drew me in and kept me reading, like with Persona, was the character work; once again we see paparazzi Daniel Park shadowing Suyana, for example, never admitting to himself that he’s in love with her and pained by the distance between them. My personal favorite was Magnus, Suyana’s personal handler, since once again we don’t know if we can trust him, even though we desperately want to because, like with Daniel, there’s a tragedy to the way Suyana keeps him at a distance, when apparently all he wants to do is protect her.

There are some big reveals with these characters, and intriguing twists that make Icon a great political thriller. However, I’d be lying if I said I enjoyed it as much as Persona. That first novel opens with an assassination attempt, and then follows Suyana and Daniel as they lay low through the streets of Paris, trying to figure out who wants Suyana dead and how to get the upper hand on them. That sense of urgency is missing here, and so I found this novel a lot less tense, even as the characters were discussing and dealing with things that carried a fair bit of weight. There is a pickup as the novel concludes, but it doesn’t really balance the more sedate nature of the rest of the novel.

Still, I’m a huge fan of Valentine’s writing, and Icon was a great read – especially considering I didn’t expect to see a second book in this world. Things are set up in a way that I wouldn’t expect a third book, either, but if Valentine comes out with another sequel, I’ll definitely read it.

An Ottawa teacher by day, Brandon has been published in On Spec, Third Flatiron Anthologies, and The 2017 Young Explorer’s Adventure Guide. His Stormtalons short story, “Wizard-sitting,” with the Ed Greenwood Group, is now available from Onder Librum and other platforms. Learn more at brandoncrilly.wordpress.com or on Twitter: @B_Crilly.