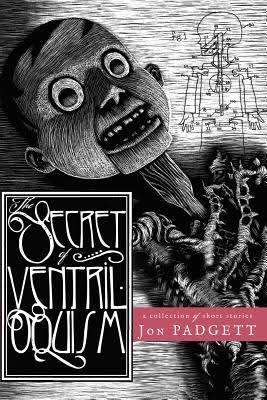 A lot of the reviews of this collection compare Jon Padgett to Thomas Ligotti, which is fair, since Jon Padgett has been the long-time moderator of the Thomas Ligotti fansite, ligotti.net, and one of the stories takes its title directly from a Ligotti story. But the big question that potential new readers will likely have when reading those reviews is “Who the hell is Thomas Ligotti?”

So. Thomas Ligotti himself has been called a successor to H.P. Lovecraft (yeah, the Cthulhu guy), but that’s not really accurate. Where Lovecraft dealt with the horrors of the unknowable, Ligotti deals more with the horrors of pointlessness. Where Lovecraft’s stories would end with the protagonists killed or driven mad by eldritch horrors, Ligotti’s stories were more likely to end with those protagonists actually joining forces with the darkness. Pick up Songs of a Dead Dreamer, Grimscribe, Noctuary, and Teatro Grotesco for some truly next generation horror.

Basically, Thomas Ligotti’s horror fiction differs from anything else you’ve read because he places his philosophy front and center in these stories. And while that philosophy (which is sort of nihilistic, but not exactly) won’t resonate with a lot of readers, he has developed a dedicated fan base over the last thirty-five years. One of those fans is Jon Padgett.* And Ligotti’s horror philosophy lives on in the debut collection of stories from this author.

It begins with “The Mindfulness of Horror Practice,” which is more of a thought experiment than a story. Basically, the author walks you through an exercise to place you in the right frame of mind to read the remainder of his collection. It’s quite telling that the collection DOES NOT end with a second primer detailing how to get yourself OUT of this state of mind.

“Murmurs of a Voice Foreknown” details the torments that a younger brother endures from his older sibling. While there is a bit of revenge that comes into play, the story is more concerned with the shift in thought that’s needed before revenge is possible than with the act itself. The basic lesson seems to be that we should be careful about whom we try to intimidate through fear, because fear can change people in unexpected ways.

“Origami Dreams” deals with the shifting nature of reality, tugging at the fear that we’ve all had from time to time that someone rearranges the universe in subtle ways when we’re not looking. Things we would have sworn to be true are revealed to never have happened and we have no memory of key events that everyone around us recalls. It’s at this point in the collection when the reader begins to realize that each story actually builds on the others, producing a nightmarish layering effect.

“20 Simple Steps to Ventriloquism” starts as a typical instruction manual on ventriloquism and, for the first half-dozen steps, you might believe that the author has literally copied some old instruction booklet into a story collection. But then the steps begin to take an ominous turn as we are introduced to the concept of “Greater Ventriloquism” and the sacrifices that such a skill requires. This one is easiy the best story in the collection and deserves whatever awards it is sure to receive.

“The Infusorium” was originally published as a standalone chapbook and in many ways feels out of place compared to everything else in the book. A police officer is investigating a strange fog that’s making everyone in a papermill town sick, eventually unearthing a dark secret that goes back decades. While some of Padgett’s horror philosophy is presented here, it’s done in a way that removes us from the center, as if we’re observing the story from the outside rather than the inside. The result is the weakest story in the collection (which still happens to be good, just not as good as everything else that precedes and follows it).

“Organ Void” takes us back into horrific thought experiments, this time with the concept of ideas functioning like viruses. The shifting perspective makes it a little hard to follow, but there’s definitely something worth exploring in this one.

“The Secret of Ventriloquism” is a one-act play that in many ways reads like a direct sequel to “20 Simple Steps to Ventriloquism,” with some unlucky sap attempting to adopt those twenty steps in his own life, with predictably disastrous results.

It wraps up with “Escape to Thin Mountain,” which takes its title from Thomas Ligotti’s “Ten Steps to Thin Mountain.” By this point in the collection, the reader has no idea what to make of the little girl’s song. Is she really singing it or being made to sing it? Are we really hearing it or just tricked into thinking that we’re hearing it? Is there even a little girl at all? And are we really on a train?

So who should read this collection? It’s a bit of an acquired taste. More than a bit, to be perfectly honest. Try reading “20 Simple Steps to Ventriloquism” first and, if you like it, invest in the story collection. You can read it for free on the Lovecraft ezine or listen to the author read it at Pseudopod.

If you like that sample story, you can pick up the whole collection in print or electronic versions at Amazon or other online bookstores. Good luck.

* Another of those long-time fans is me. Someday I’ll tell you about the mysterious circumstances surrounding my attempt at acquiring a first edition of Songs of a Dead Dreamer. Fortunately, I was unsuccessful.

Michael Penkas has been writing horror, mystery, science fiction, and fantasy stories for years. His first mystery novel, Mistress Bunny and the Cancelled Client, is available in print and electronic editions. Learn more about his work at www.michaelpenkas.com.

Is it really that hard to acquire a firs edition of Songs of a Dead Dreamer? I have one gathering dust on a shelf in my garage. maybe I should unload it and go on a cruise…

Thanks for the review. I think Ligotti is probably the finest horror writer living today, particularly in terms of literary prose and effect. However, even realizing this clear truth, I am not a big fan of Ligotti. His stuff usually just leaves me depressed. You claim Ligotti’s philosophy “is sort of nihilistic, but not exactly”. If it’s not nihilism, what is it?