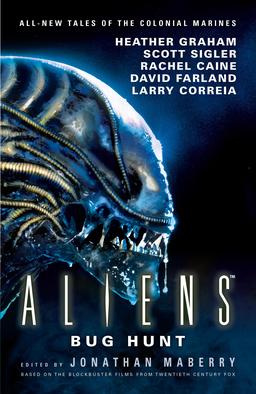 With a brand new Alien film on the horizon (Alien: Covenant, arriving May 19; see the trailer here), what better time for a Alien anthology, featuring Colonial Marines in bloody conflict with the deadly Aliens in deep space, on alien worlds, and in derelict space settlements and lethal nests?

When the Colonial Marines set out after their deadliest prey, the Xenomorphs, it’s what Corporal Hicks calls a bug hunt — kill or be killed. Here are fifteen all-new stories of such “close encounters,” written by many of today’s most extraordinary authors.

Set during the events of all four Alien films, sending the Marines to alien worlds, to derelict space settlements, and into the nests of the universe’s most dangerous monsters, these adventures are guaranteed to send the blood racing—

One way or another.