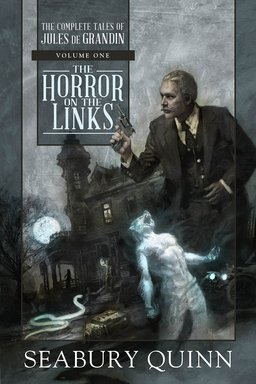 Today Weird Tales is chiefly remembered as the magazine that launched the careers of the great pulp fantasy writers of the 20th Century. But as most fans of the Grand old Lady of the pulps know, the most popular Weird Tales author wasn’t Robert E. Howard, or H.P. Lovecraft, but Seabury Quinn, someone whom is almost completely forgotten today. Quinn’s supernatural detective Jules De Grandin — a top-seller in the 20s and 30s, appearing in over ninety stories and a single novel between 1925 and 1951 — has been out of print for decades. Night Shade rectifies that injustice with the first volume of The Complete Tales of Jules De Grandin, arriving in hardcover next week.

Today the names of H. P. Lovecraft, Robert E. Howard, August Derleth, and Clark Ashton Smith, all regular contributors to the pulp magazine Weird Tales during the first half of the twentieth century, are recognizable even to casual readers of the bizarre and fantastic. And yet despite being more popular than them all during the golden era of genre pulp fiction, there is another author whose name and work have fallen into obscurity: Seabury Quinn.

Collected for the first time in trade editions, The Complete Tales of Jules de Grandin, edited by George Vanderburgh, presents all ninety-three published works featuring the supernatural detective. Presented in chronological order over five volumes, this is the definitive collection of an iconic pulp hero.

The Horror on the Links: The Complete Tales of Jules De Grandin, Volume One will be published by Night Shade Books on April 4, 2017. It is 512 pages, priced at $34.99 in hardcover and $9.99 for the digital edition. Not sure who did the cover, but I’m working on it.

I love most of these old pulpy writers. But I’ve never quite seen the appeal of Seabury Quinn. His stories always strike me as formulaic and hackneyed. One might say, “Well, isn’t that one of the appeals of pulp? People expect certain ‘beats’ in such stories.” I suppose so. But, at the very least, I don’t think Quinn’s stories have aged well.

The other thing I hear it’s that it’s difficult to read them back-to-back, for just the reasons you describe.

I haven’t read them, so I can’t comment. But I know that as a young reader, I devoured a LOT of pulp fiction, and thoroughly enjoyed it despite all its flaws. I’m sure there are young readers out there yet who will discover and enjoy Seabury Quinn the same way.

Yeah, I read what I believe was my first Quinn story in an anthology last year and was unimpressed — I think I might’ve preferred Karnacki the Ghost-Finder, and I wasn’t all that keen on the Karnacki stories either, but Hodgson did occasionally have a way with a turn of phrase or flash of imagery.

I had never heard of Quinn or de Grandin when Popular Library issued their six book reprint series but I was enthralled by them-their very age and old style was a welcome relief from the oh so serious literature of the 70s. Basically I’m a sucker for the Good Old Stuff to borrow from John D. MacDonald. Yes they fell in to a apttern but Quinn varied the menace and the solution beyond the Universal Pictures method of monster bashing. I began to collect Weird Tales if de Grandin was in them and had about 15 or so (I’m spread thin on my collecting desires otherwise certain collections would have finished years ago but for me at my age the thrill of the hunt keeps the interest up) when Battered Silicon Press poublished their three volume set. I traded my Weird Tales issues to my local dealer for the set (two issues had Conan stories in them) and donated the Weird Tales index book I had been scribbling-my dealer colelcts research material and has a large library of that sort of material. The stories after 1942 are shorter and less interesting but read for entertainment value alone as I do the early stuff is marvelous. I believe Quinn knew his audience and what they wanted and delivered. I suspect having only read Roads his most lauded work teat if he put his mind to it he was capable for higher stuff. Just saying.

John: “I’m sure there are young readers out there yet who will discover and enjoy Seabury Quinn”

Good point. I hope I haven’t steered anyone away with my cranky comment.

I remember reading somewhere that Quinn was one of the most prolific and well-paid pulpsters of the era. So he must’ve been popular or else he wouldn’t have been able to keep selling story after story.

After doing a bit more research, it turns out that what I read last year was his story Pledged to the Dead, which is available free for Kindle on Amazon, if anyone wants a sample of his work: