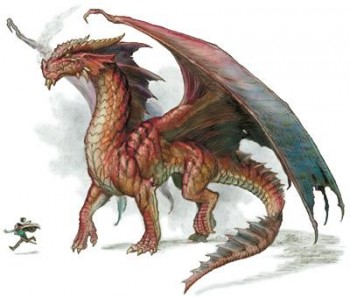 You’ve got a huge ancient red dragon that has flipped out. It’s on the rampage. You must stop it or the devastation will be severe and widespread. You have a couple dozen volunteers willing to make the ultimate sacrifice to save hundreds or even thousands, but to what avail? What the hell can you do to defeat an ancient red dragon?

Actually, there is a way, even with low-level warriors. But it’ll take some coordination and three necessary components:

Okay, here’s the game plan. The item transference spell is pre-cast on a number of people, setting the transference up like dominoes: when one goes down, the item is passed along to the next person, and the next, and the next. 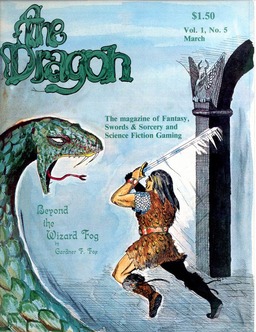 You’ve got any number of volunteers engaging with the dragon, probably with zero efficacy. They’re dying left and right, but they set it up so that your first warrior, armed with the Vorpal blade, can get in a hit.

If he rolls a 20 it’s all over. The most ancient, most powerful red dragon poses little threat when relieved of its head.

Unfortunately, you know that even with a Vorpal sword there’s a 95% chance the blade does little more than tickle the dragon. And your warrior is likely only going to get the one shot, immediately after which he will be reduced to a pile of ash.

But with your object transference spell active on the Vorpal blade, it immediately materializes in the hands of the next warrior, who takes her one shot – and who then, with anything but a roll of 20, gets free cremation service. The sword is like a relay-race baton, passing along to the next wielder and the next. Eventually (odds are good that it’ll be within 20 shots), one fighter is going to land a hit that has the full effect of Vorpal power, and the ancient red dragon will never have to shave again.

By that time you might have lost 50 brave souls (the sword wielders plus all the other volunteers ineffectively blasting away to keep the dragon occupied), but to take down a monster that can lay waste to armies and level whole cities, this seems a rational price to pay.

So there you have it. Go ahead, start trying to poke holes in this plan. Or feel free to propose your own. I’ll be especially impressed if you’ve got one that doesn’t require a Vorpal sword…

Won’t work in 5th Edition, as Vorpal decapitation won’t work on creatures that have legendary actions, or that the DM deems too large.
Won’t work in 3.5, since you have to confirm the critical after the 20.
In 5th edition, you’d have better luck with, say, 1500 longbowmen, each of whom would do an average of 9 points on a 20 (because it’s a critical hit)(in 3.5, they’d all need to have magic arrows).

Getting them all with 150′ of the dragon undetected, and able to fire before it either flies out of range or uses its Frightful Presence (120′ range), is left as an exercise for the reader.

Thanks for weighing in, Allen — I was hoping someone would get a discussion going!

I’m not (yet) familiar with 5th Edition, but I know what you’re talking about with 3.5: my friend Gabe Dybing (who has a new Modular post up today!) brought up the same objection.

To which I say, well, F that. Is there anyone who introduced a Vorpal blade into a 3.5 campaign and didn’t immediately house-rule it back to “natural 20 and it’s off with your head”?

Otherwise, you’re the DM who tells his elated player, “Fancy sword you got there. Too bad its power only works like once every 400 tries.”

A Vorpal blade that doesn’t Vorp is just another shiny +1 sword with a bad-ass-sounding name!

Hey, I can follow the reasoning behind the tweak to “natural 20” in the revised rules: the Powers That Be felt a critical hit roughly once out of every 20 strikes was too frequent. But requiring a second check — especially against a monster whose AC is too high for the character to hit without a natural 20 — virtually eliminates the “luck of the little guy” element.

Call it what you will, but “natural 20” allows for fate, destiny, or just bloody good luck to play a hand. Bard takes out Smaug with a single arrow. Luke Skywalker blows up the Death Star with a couple blasts from his X-Wing Fighter. David drops the giant Goliath with a frackin’ sling stone!

You can rules-squeeze those “act-of-the-gods” scenarios out entirely from your game if you want a more realistic experience. But then, if that’s the case, you probably don’t want to be playing a game where your party might at some point walk into a gelatinous cube or get into a smackdown with a black pudding or go eye-to-eye with a bobbing beholder.

(Incidentally, just a fun note: a Vorpal blade’s decapitation power would be useless against any of those three monsters I just mentioned.)

Or you can do what I suggest and choose a game that better emulates what you’re looking for. 🙂

And if the dragon was flying…?

Creighton: “And if the dragon was flying…?”

Then you kiss your ass goodbye.

Seriously, though, that’s part of the planning/coordination: you have to corner the dragon when it’s bunkered down in a cavern or something, and part of the role of your sacrificial minions is keeping it preoccupied so that it doesn’t take to the sky

All very far-fetched; it’s true — but not as far-fetched as the half-baked “dowse Smaug in molten gold” scene in Peter Jackson’s The Desolation of Smaug.